How to Make Creamy Beer Cheese 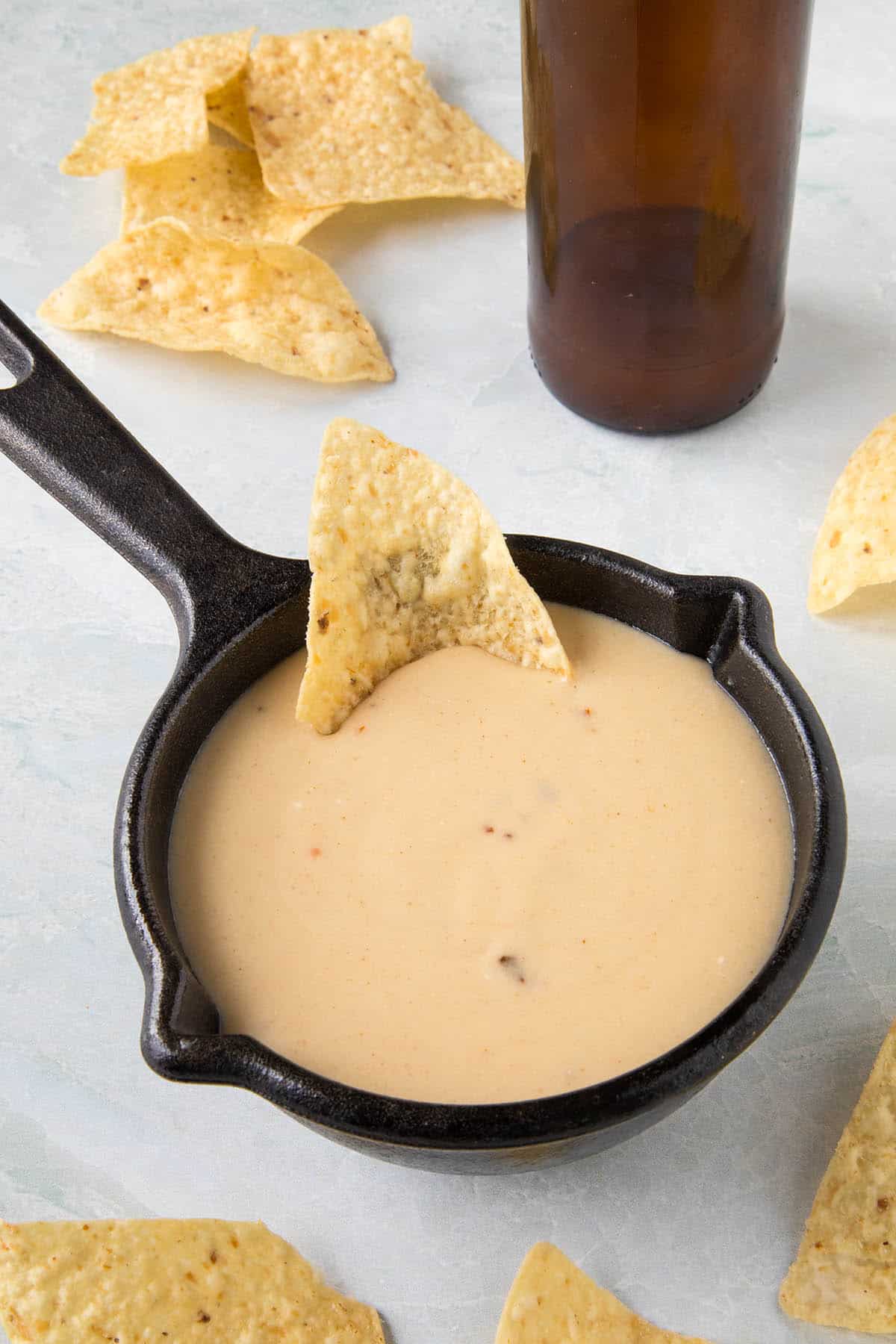 Make your own creamy beer cheese at home with this recipe using melty cheddar (or other) cheese, beer and any other seasonings you’d like. Build your own recipes with this base, though it is amazing on its own. Perfect for beer cheese dip, beer cheese sauce, and beer cheese soup.

I literally JUST made this recipe for some Irish Nachos and realized I use the same base recipe for many of my cheese dishes.

I start my beer cheese sauces, beer cheese soup recipes, and beer cheese dip recipes basically the same way, so I thought it would be useful to post a simple “how to” to help would-be beer cheese makers out there.

It all starts out similar to making a gumbo. You begin with a roux.

No need to cook it down a long time like you do with a gumbo, just long enough to cook the raw flour so you can swirl in your beer and cheeses.

The result is a super creamy, drippy cheese sauce that can be seasoned with whatever seasonings you’d like, all depending on your application.

For the Irish Nachos Recipe, I added nothing else to it and served it over the potatoes and corned beef as-is. No need to mess with perfection in that case!

But truly, you can use this simple yet tasty recipe to build from and make many a cheesy sauce, dip, or soup.

So! How do you make beer cheese? Let’s go! 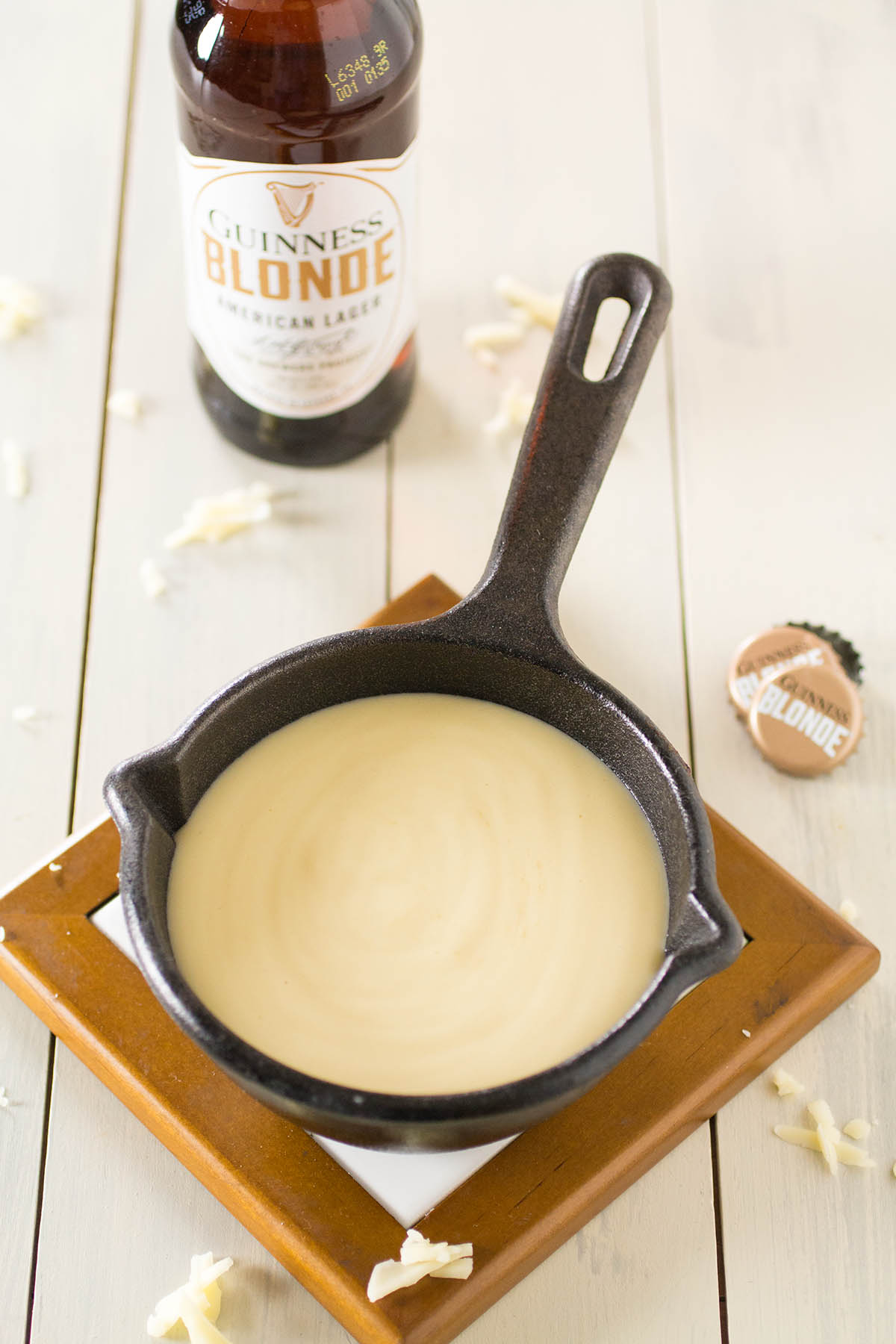 I’ve outlined the actual steps below for how to make your own homemade creamy beer cheese, but here is the “discussion” part of it.

How to Make Creamy Beer Cheese – The Recipe Method

First, melt some butter in a pot and stir in your flour. This is what is called a “roux”. Cook this down, swirling often with a wooden spoon, about 10 minutes or so to cook out the raw flour taste. Learn more about How to Make a Roux. 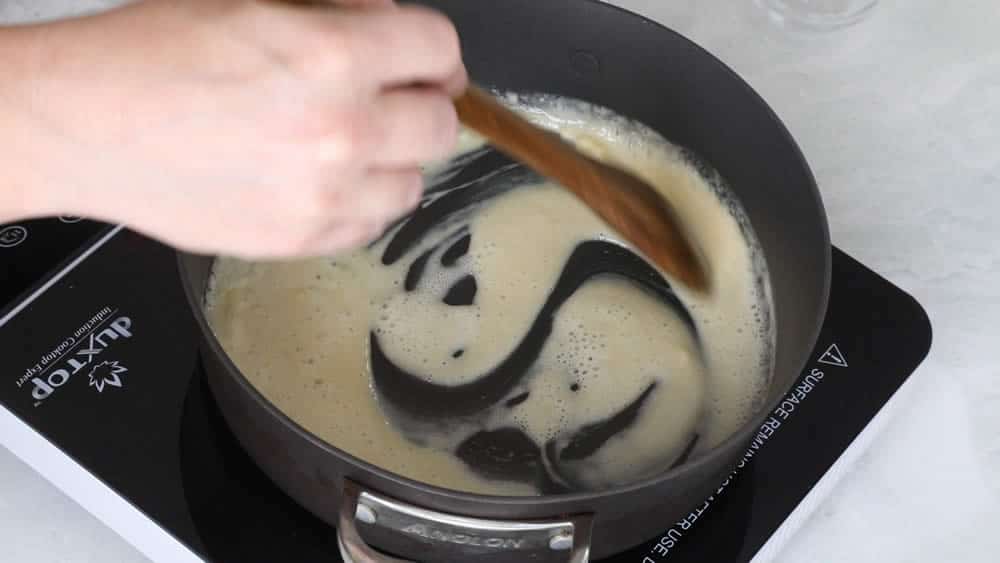 Next, add in your preferred seasonings. I’m using spicy chili flakes and some salt, but you can vary it up here, or add none at all for an easy cheese sauce.

Some flavor ideas for you include garlic powder, cayenne pepper for some heat, a few splashes of hot sauce. Worcestershire sauce is a nice touch, too. 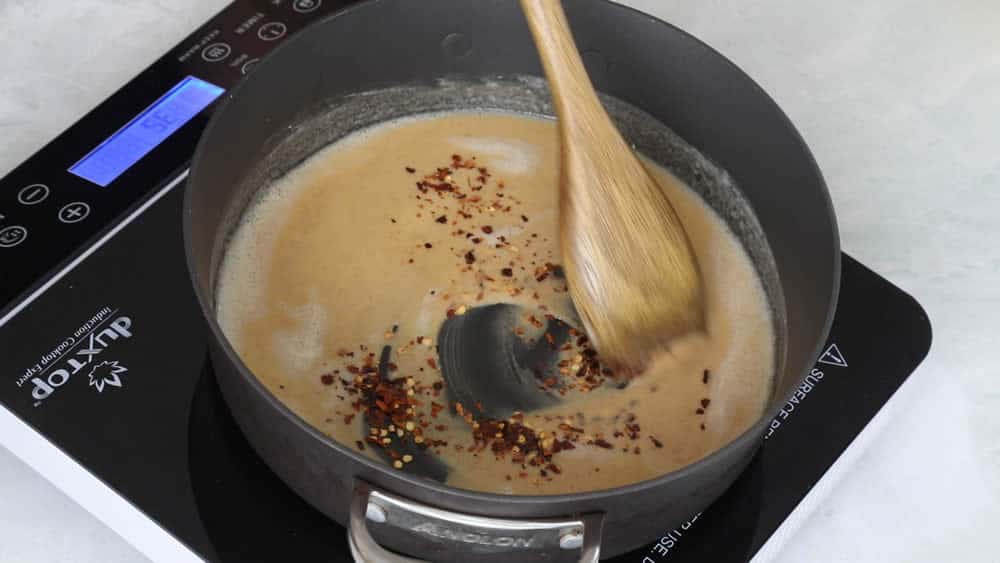 Next, swirl in your beer. 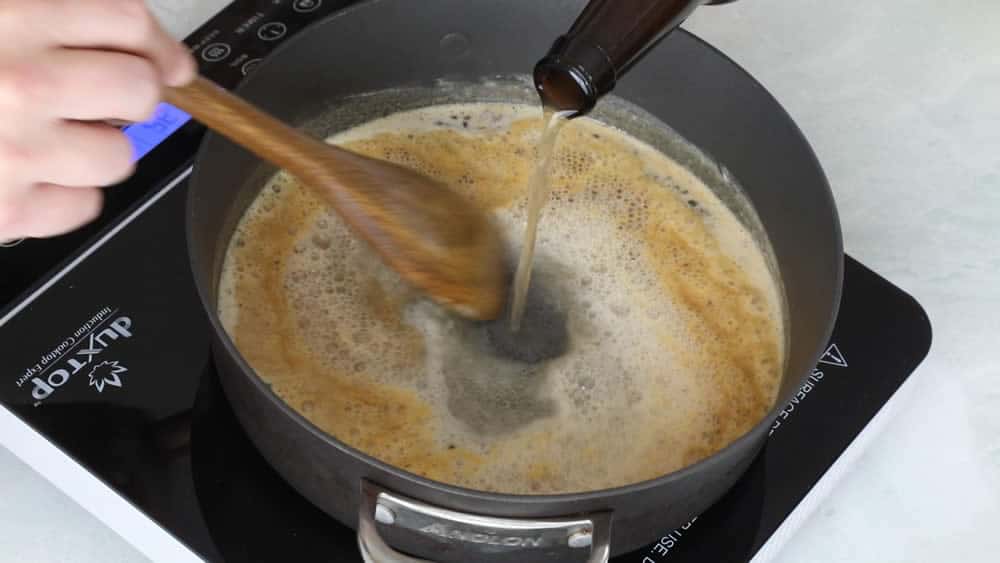 In this particular case, I used a cream ale from my own home brew batch, though you are free to use any type of beer you would like.

I suggest a full flavored light colored beer, as a darker beer can affect the appearance, though perhaps that is what you are looking for.

Truly, any beer is good, though a simple light beer probably won’t add much flavor. Keep stirring until the roux becomes nice and thick. 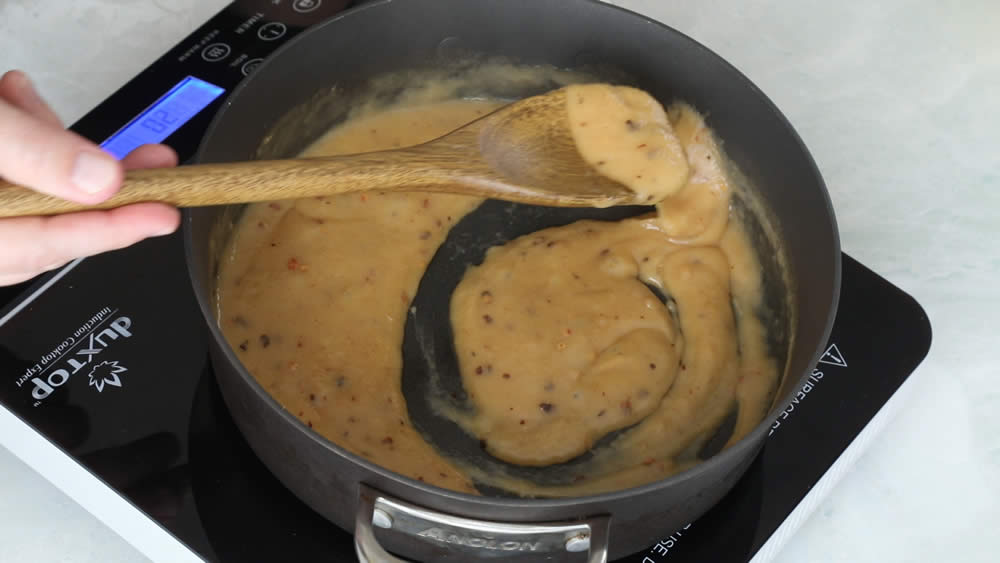 Next, swirl in the cream cheese until it melts through. This should take 6-7 minutes or so.

Once that is melted through, add in the shredded cheese a bit at a time and stir constantly until it is incorporated and melted evenly. 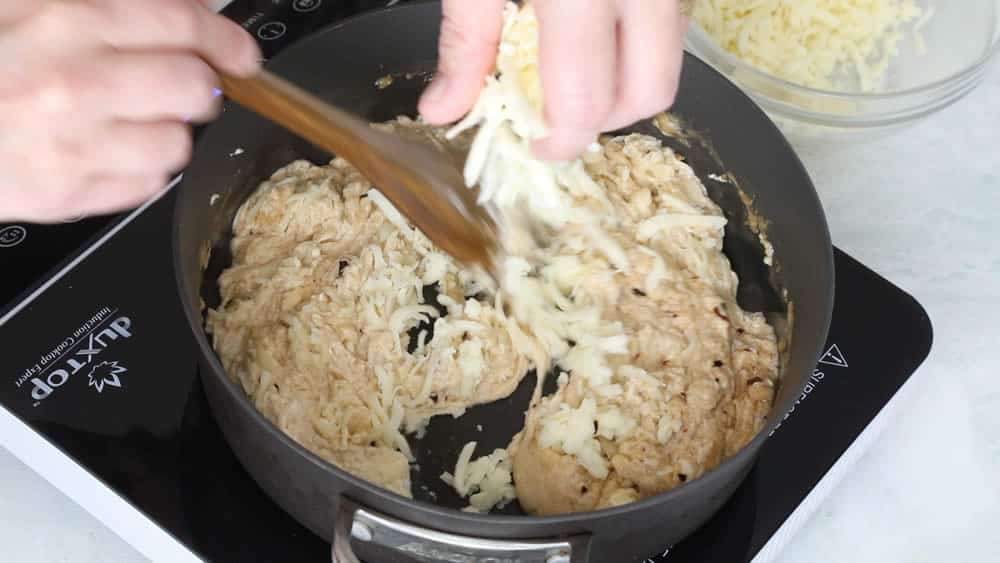 Like the beer, you can use many different types of cheeses, so long as they are melty cheeses. Like to use a sharp cheddar cheese or pepper jack.

Some won’t melt as well, so avoid those harder cheeses or ones that don’t melt consistently.

If your beer cheese is too thick, swirl in a bit of water, stock or milk to thin it out. 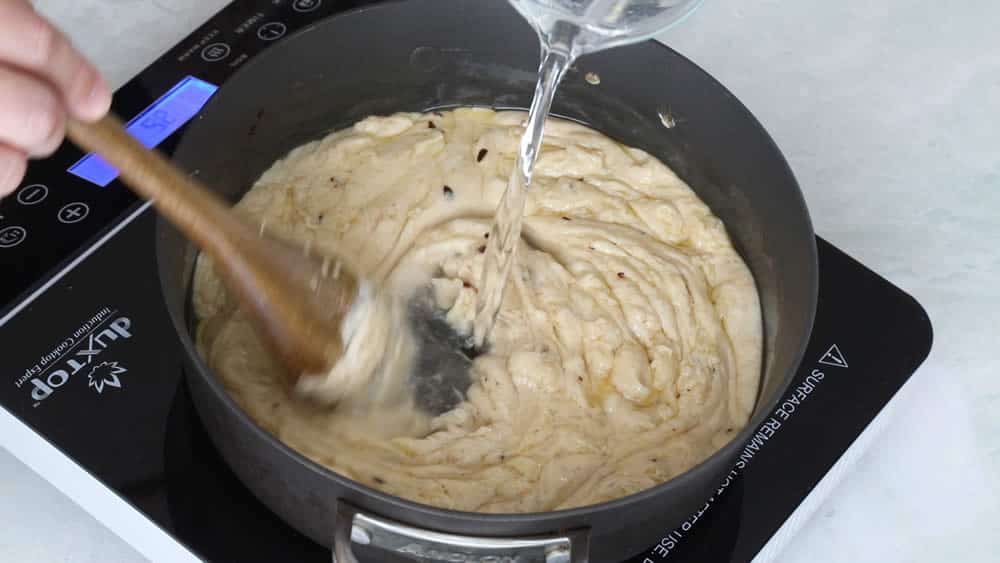 Keep on stirring until you achieve the consistency you love!

That is basically it. You will know when your creamy beer cheese is ready when you can feel it is consistent and it drips from the spoon.

At this point you can add whatever other seasonings you’d like to taste. Milk or cream is also an option, though not necessary.

You might want cream for a beer cheese soup. Serve it with chips as a dip, or drizzle it over soft pretzels.

SUPER YUM. And super easy, too. 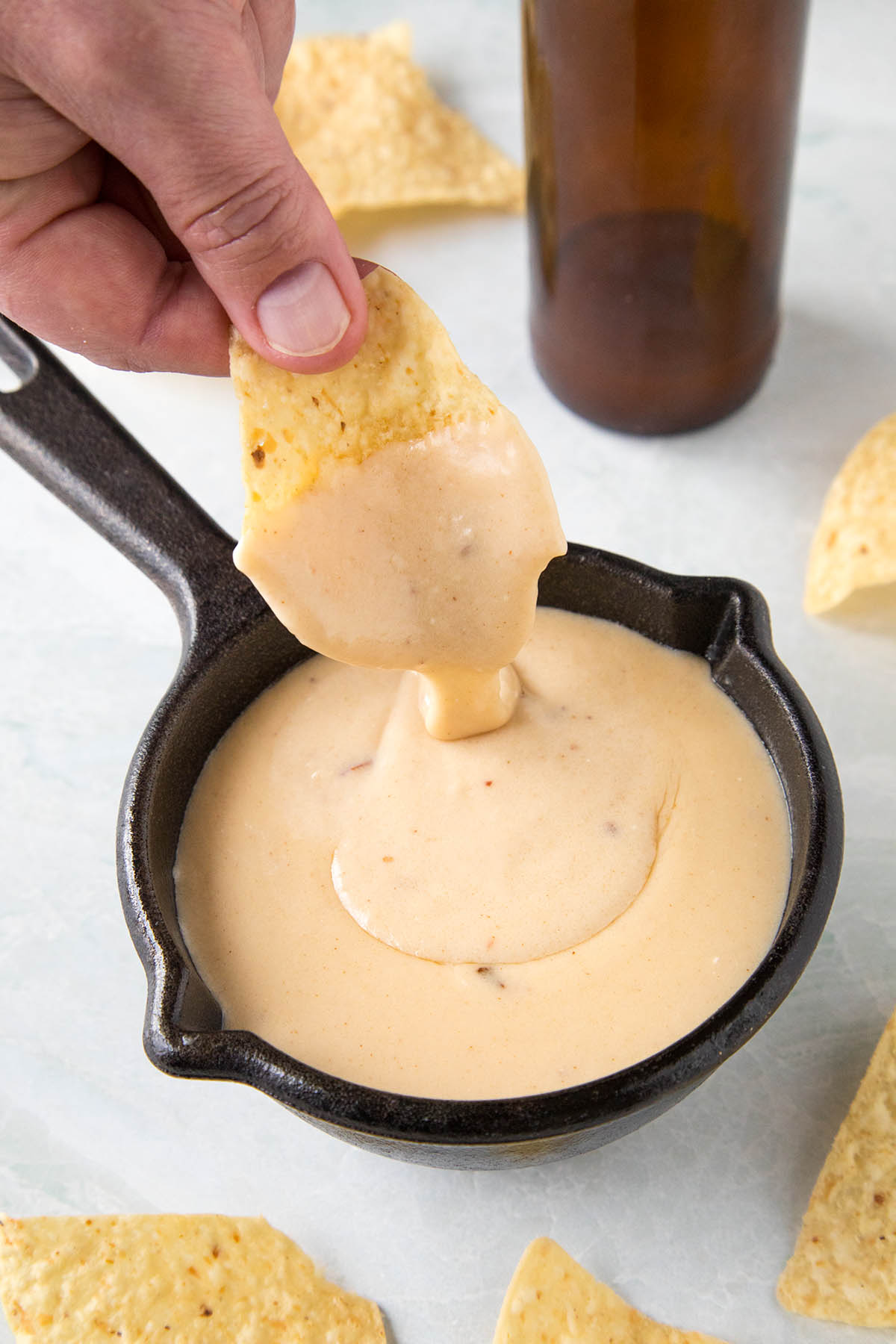 Try some of these delicious recipe ideas that only get better with creamy beer cheese! 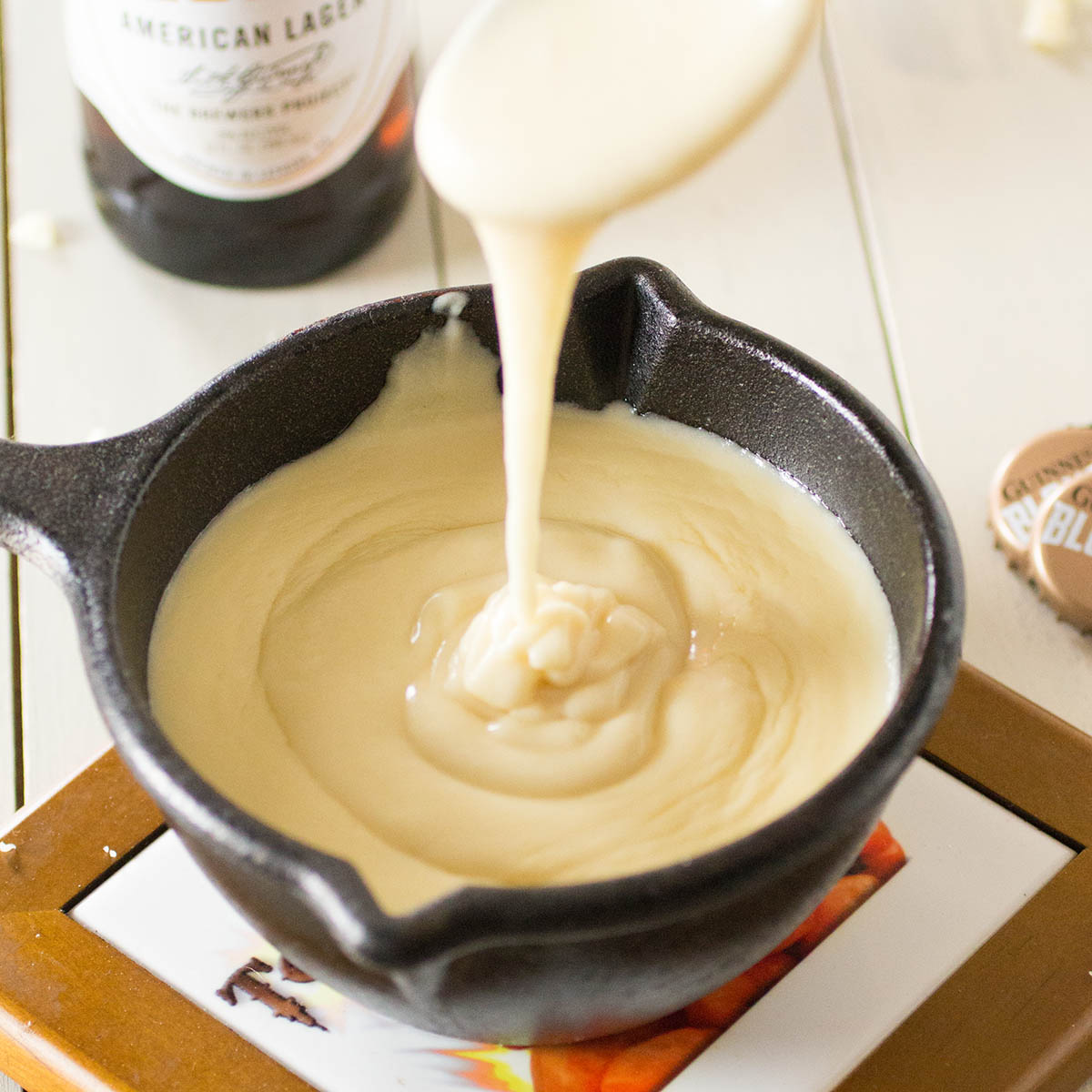 Can You Make Cheese Sauce without Beer?

Yes, you can make creamy cheese sauce with beer. If you don’t want to use beer, use a broth instead. Or, try it with milk.

Make your own creamy beer cheese at home with this recipe using melty cheddar (or other) cheese, beer and any other seasonings you'd like. Build your own recipes with this base, though it is amazing on its own. Perfect for beer cheese dip, beer cheese sauce, and beer cheese soup.
Prep Time5 mins
Cook Time15 mins
Total Time20 mins
Course: Main Course, sauce
Cuisine: American
Keyword: cheese, dip, queso, recipe
Servings: 10
Calories: 174kcal
Author: Mike Hultquist

It's that simple! What you have is a super creamy, melty cheese that goes anywhere cheese likes to go. Makes about 2-1/2 cups or so. Enjoy! Calories are calculated per quarter cup of melted creamy beer cheese. 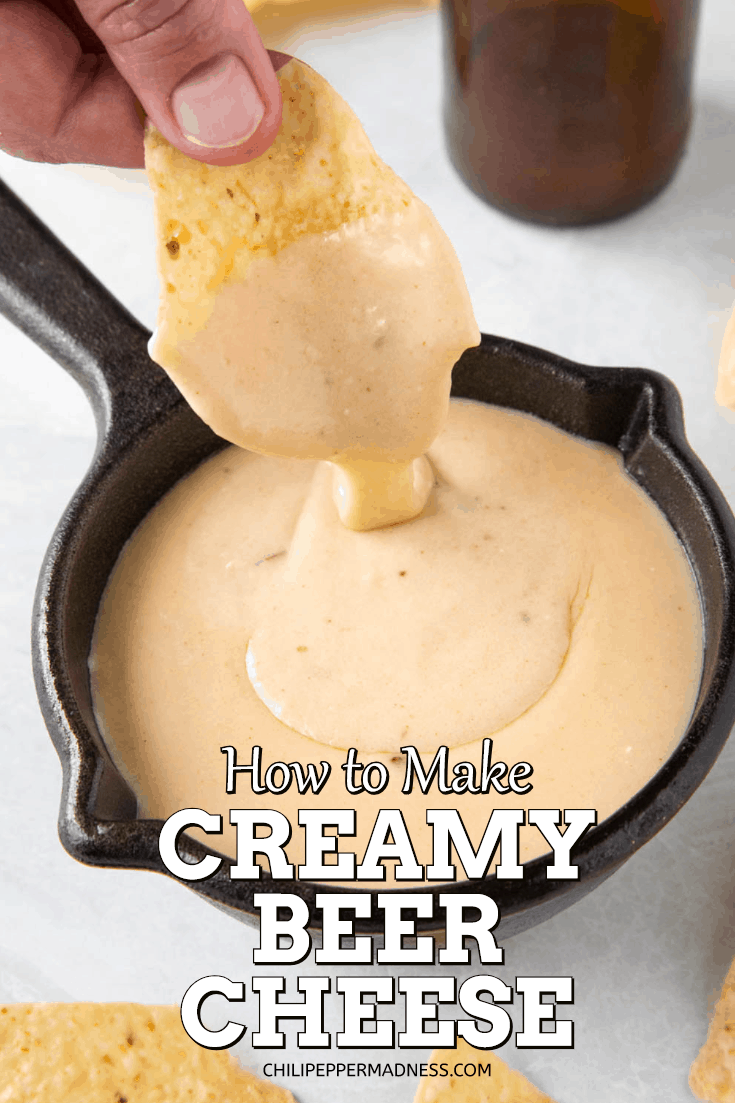