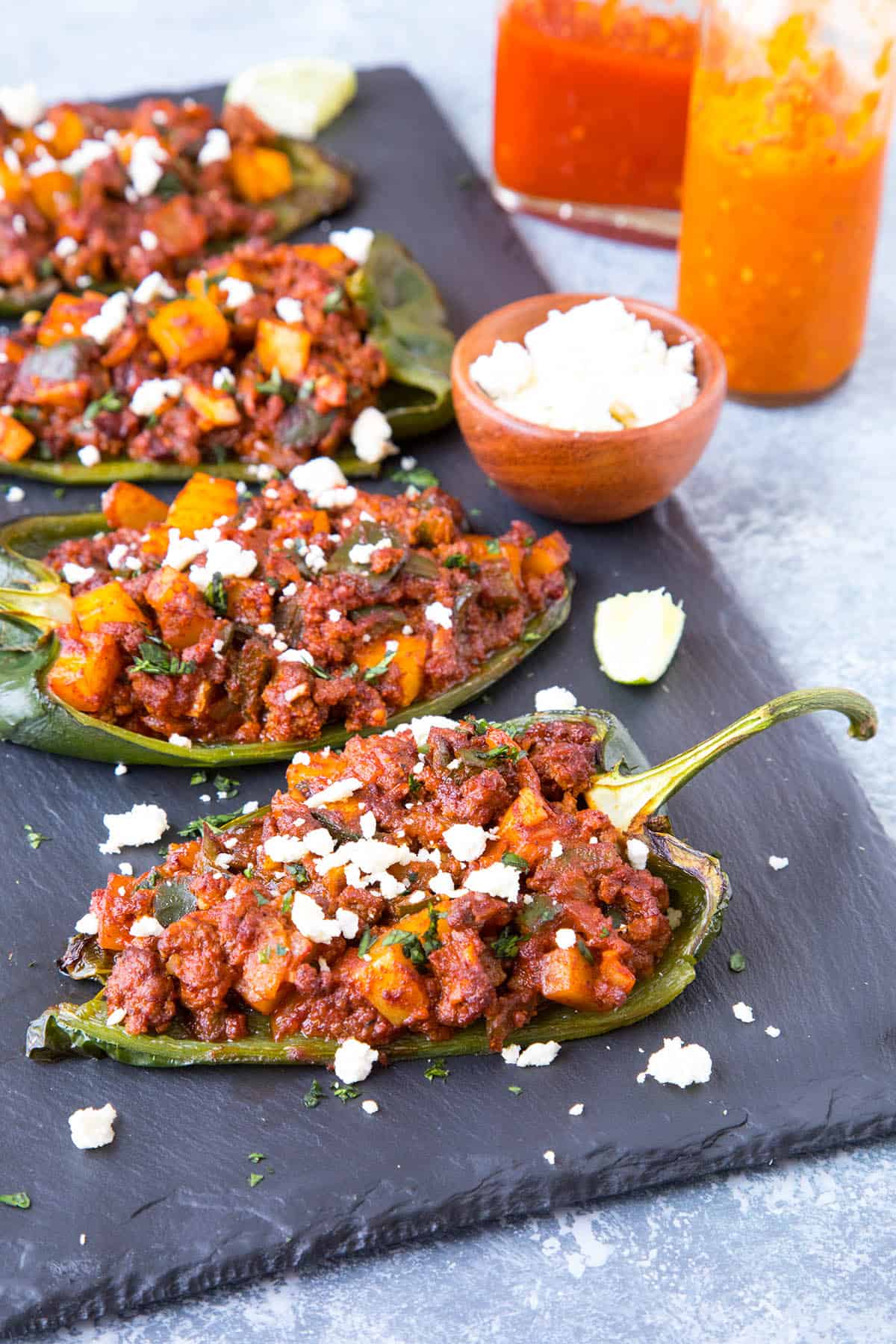 This stuffed poblano peppers recipe is filled with Mexican picadillo, a zesty mix of seasoned ground beef and potatoes, flavored with rich ancho peppers and more. Perfect for dinner any night of the week, and nice and spicy.

The way I see it, stuffed chili peppers, as a whole, are the perfect food. If you take a gander at my collection of Stuffed Chili Pepper Recipes, you’ll know I truly believe this.

I even wrote an entire cookbook dedicated to them – Jalapeno Poppers and Other Stuffed Chili Peppers. Yes! I do love them so!

Why Stuffed Chili Peppers are the BEST!

Chili peppers are the perfect stuffing vessels. They’re hollow with very little insides, super easy to core out, and they’re packed with flavor and nutrients that are good for you.

There are many, many larger chili peppers in the world that are ideal for stuffing, just the right size to make for a proper dinner. See our Types of Chili Peppers List.

You can even stuff smaller peppers to serve as an appetizer, and jalapeno peppers, of course, for everyone’s favorite – jalapeno poppers! Check out my Jalapeno Poppers Recipes.

I have plenty of those, too!

Which brings me to one of the best peppers EVER for stuffing. We’re talking…

The poblano is an extremely popular chili pepper. 4 inches long, very dark green in color, ripening to dark red or brown. Poblano peppers are mild peppers, quite large and are somewhat heart-shaped. Their skins/walls are very thick, making them perfect for stuffing as they’ll hold up in the oven quite nicely.

They have an earthy flavor that is unlike any other pepper, and DANG do they taste good. Definitely a favorite of mine.

You can learn more about the poblano pepper here.

I have a number of stuffed poblano pepper recipes on the site, but this one is quite a bit different from the others. For this recipe, I’m stuffing them with Mexican style picadillo, which is a highly flavored mix of seasoned ground beef and potatoes.

You can check out that recipe, too, though I’ve also included it below. See: Mexican Picadillo Recipe.

The first thing we need to do is make some ancho paste. You can check out my Ancho-Guajillo Paste Recipe Here, or just lightly toast a few ancho peppers in a hot, dry pan until the skins become puffy. Make sure they do not burn. This brings out the oils in the peppers. Set them into a bowl and pour boiling water over them. Let them soak for 20 minutes to soften.

While the ancho peppers are soaking, cook down the potatoes, onion, peppers and garlic until they are soft in a large pan. Add ground beef and let it brown, then add tomato sauce and your seasonings. 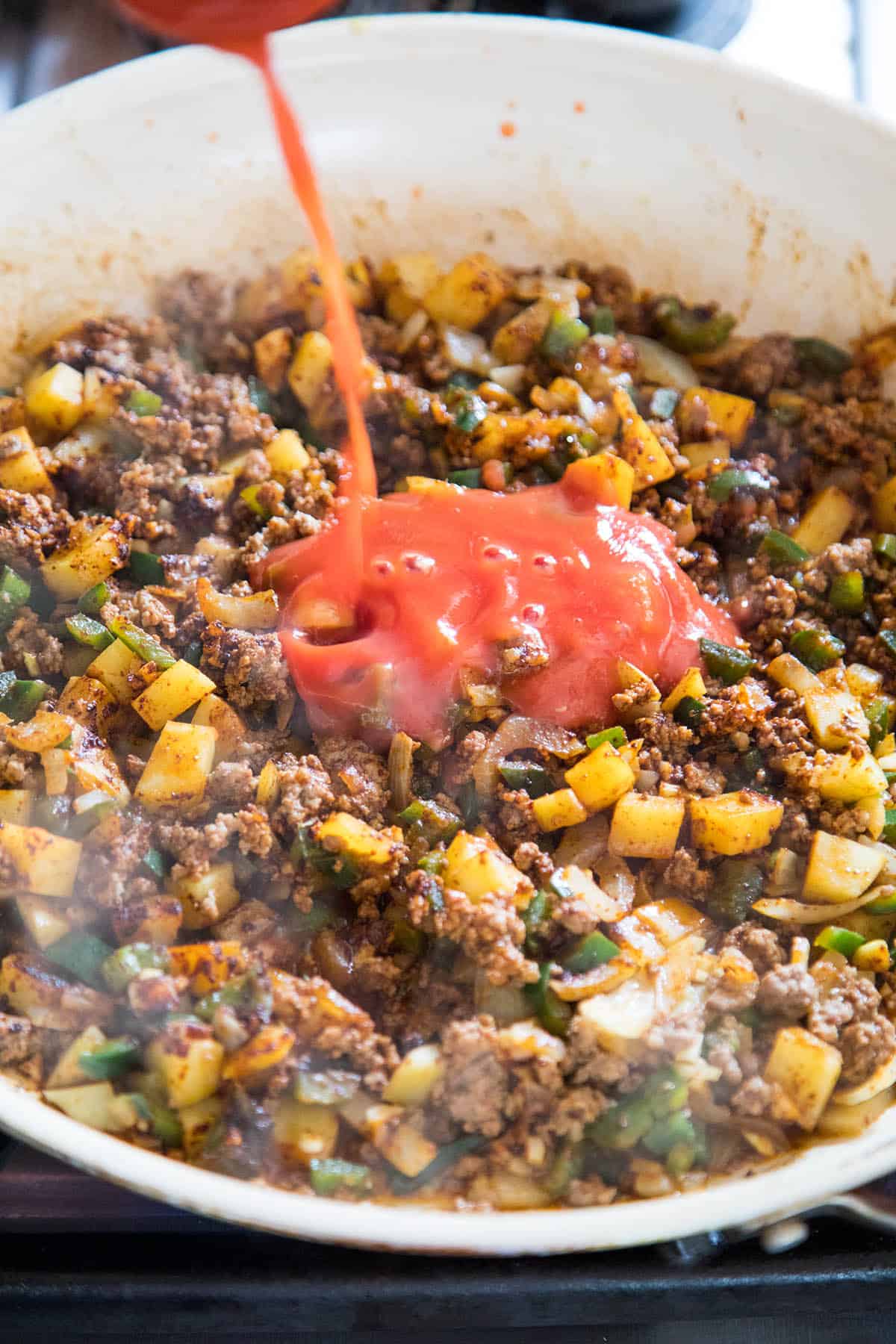 Simmer it all together. When the anchos are soft enough, scoop out the seeds and stems and process the skins in a food processor until you get a nice paste, which you’ll swirl into the simmering deliciousness, making it even MORE delicious. Truly!

Let the whole thing simmer another 10-20 minutes or longer, until it tastes just right, and serve it up over rice or on tortillas.

While the picadillo is cooking, let’s roast our poblano peppers. Easy! You can learn how to roast chili peppers here, or How to Roast Poblano Peppers, but here is a simple broiler method.

First, set your oven to broil. Slice the poblano peppers in half lengthwise and set them onto a lightly oiled baking sheet, like so.

Broil them for about 10-15 minutes, or until the skins puff up and char. They will look like this.

Remove them from the oven and let them cool enough to handle. Then, peel off the skins with your fingers. They should remove easily. Like so… 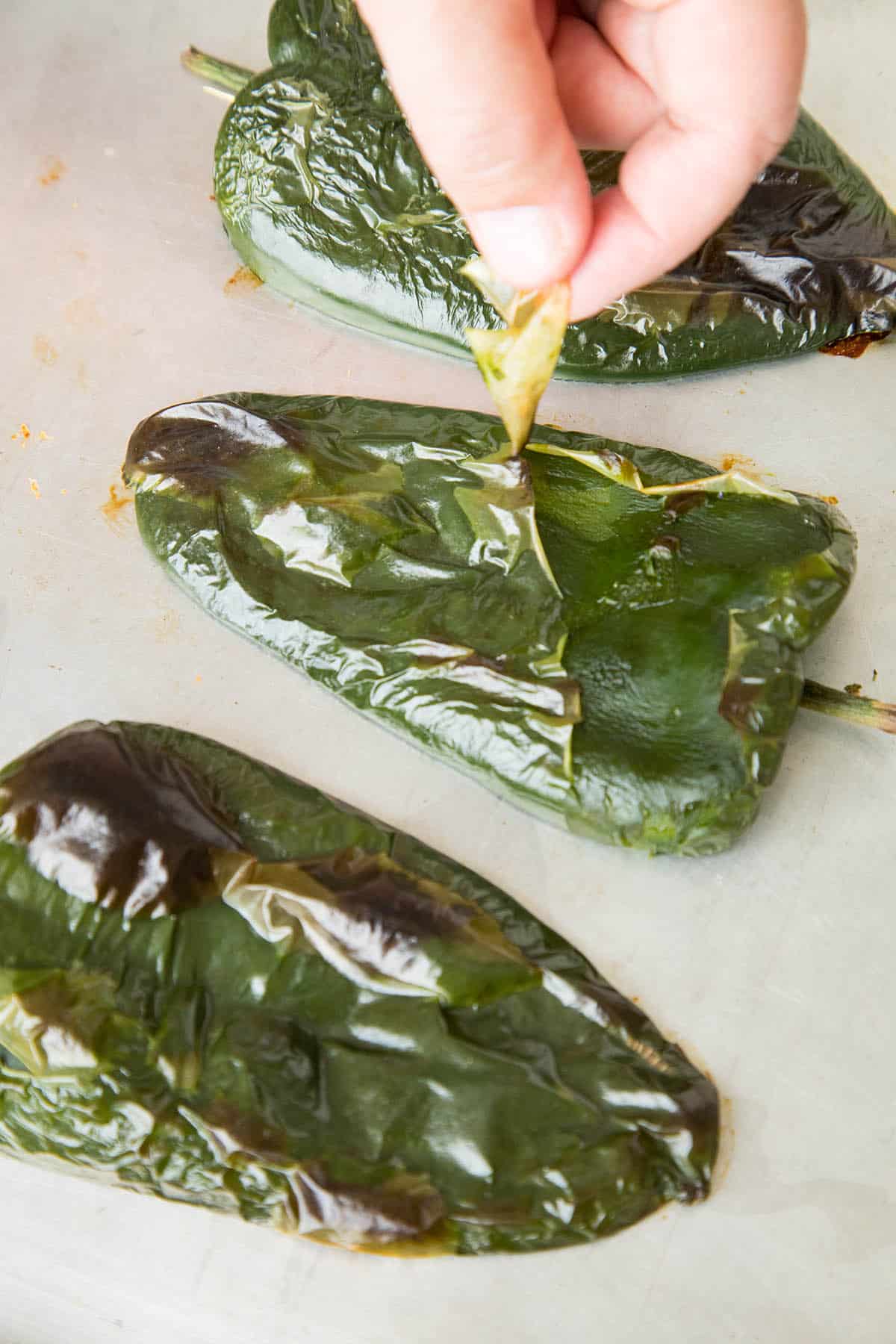 Flip them over, then fill them with your picadillo mixture.

Finally, bake them for another 10 minutes or so and they’re ready to serve!

I like to sprinkle on some fresh herbs and crumbly white cheese. And! Don’t forget the hot sauce. So many GREAT ones out there to try!

Let me know how you like this recipe. I’d love it if you posted your pics on social media. Tag me at #ChiliPepperMadness.

Or please! Leave a comment with some STARS below if you like this one! See you soon! — Mike H.

Heat Factor: Mild, though you'll get a TON of flavor from the roasted poblano peppers, ancho peppers, and seasoning blend. You can easily add in more heat with your chosen hot sauce. 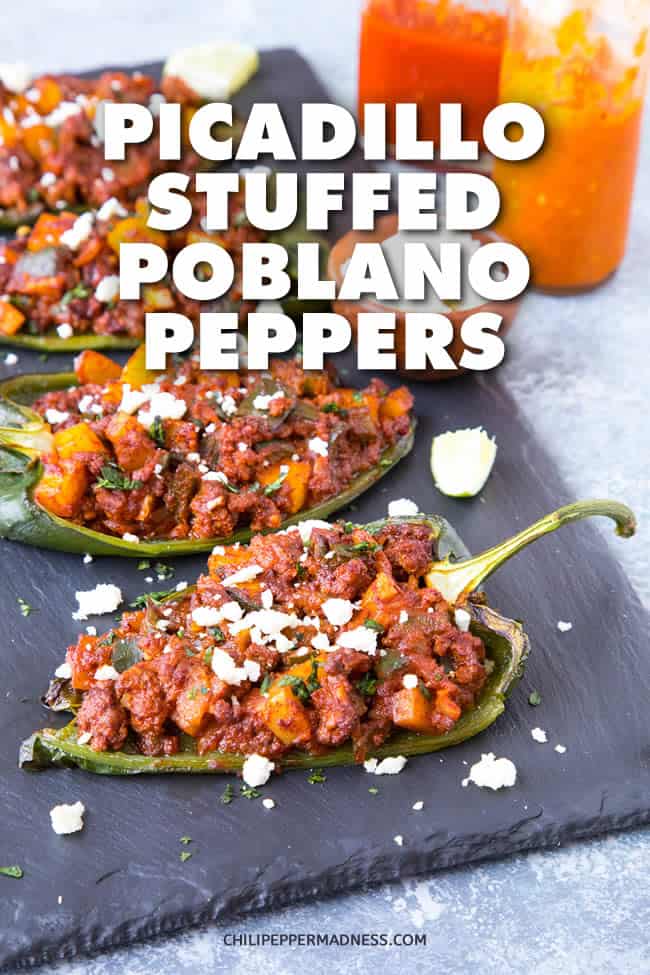