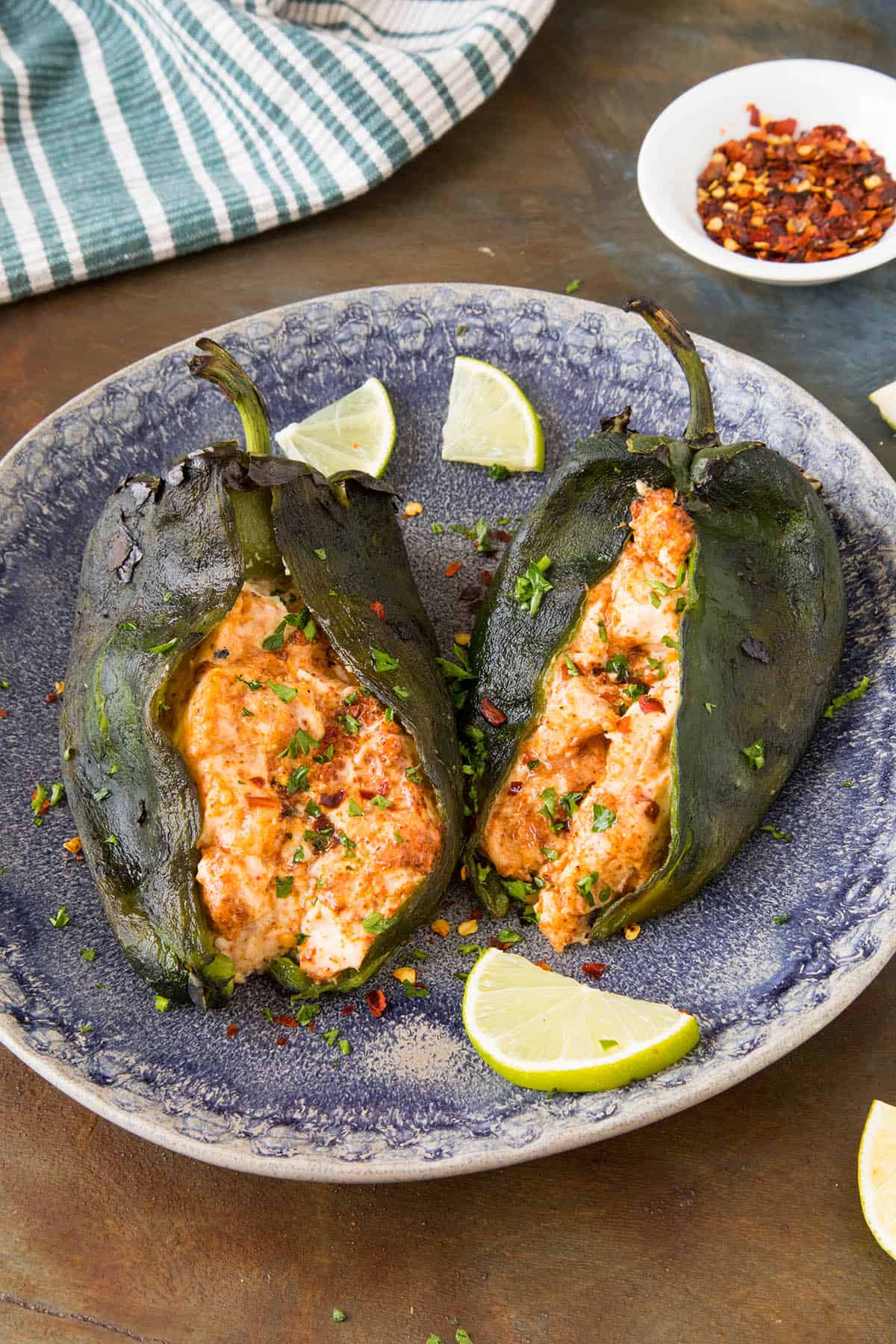 A recipe for earthy poblano peppers that have been roasted and stuffed with cream cheese and white cheddar cheese along with a mixture of seasonings, then grilled or baked until the insides are nice and gooey. One of my favorite stuffed pepper recipes.

Patty was in the mood for something a little decadent and the first thing that popped into my mind was cream cheese.

Cream cheese? Really? I have no idea why. There are so many decadent options around. Decadence abounds! But once the cream cheese train started rolling, I couldn’t get off, so the idea snowballed into the recipe you see below.

You can either GRILL or BAKE these stuffed poblano peppers. You can also roast them however you’d like, either on the grill, in the oven, or over an open flame, as I have done in the video. Any way will work, though.

I have instructions below for grilling the poblanos, but I’ve also written up more detailed instructions here – How to Grill Poblano Peppers – for your reference if you have further questions. Grilling your poblano peppers allows you to peel off the skins, and it softens up the peppers, reducing the sugars and amino acids within, bringing out entirely new flavors.

Seriously, there is something transcendent about a roasted chili pepper that you’ll never get anywhere else.

Once you grill or roast the pepper and peel off the skin, get your cream cheese mixture all up inside that crazy grilled poblano and either toss it back on the grill for the cheeses to melt, or pop it in the oven, per below.

If you don’t feel like grilling – or maybe it’s just too cold outside if you’re finding this recipe in the winter – try roasting them in the oven instead. See How to Roast Peppers or How to Roast Poblano Peppers.

Or Roast them over an open flame. Instructions on that below.

How to Roast and Peel Poblano Peppers In the Oven

ONE: First, set your oven to broil. Slice the poblano peppers in half lengthwise and set them onto a lightly oiled baking sheet. Olive oil is good, or use a spray oil.

TWO: Broil them for about 10-15 minutes, or until the skins puff up and char and loosen from the pepper flesh. Flip them halfway through the process to get both sides.

Remove them from the oven and let them cool enough to handle.

THREE: Peel off the skins with your fingers. They should remove easily.

How to Roast  Poblano Peppers Over an Open Flame

Flame roasting your poblano peppers is the fastest method. Just get a flame going and set the poblano pepper over it. Let the skin char and blacken.

Flip it every minute or so in order to get all the skin. When it is charred enough, remove it from the flame and let it cool enough to handle.

You can place it into a paper or plastic bag and seal it to let the steam loosen the skins if you need to. Peel away the skin and remove the seeds and innards. You’re ready for stuffing!

You might need to vary up the amount of stuffing based on the size of the poblano peppers. I used a combination of cream cheese and white cheddar shredded cheese, along with some of my preferred seasonings, but you can include other cheeses if you’d like.

Be sure to use good, melty cheeses, as those will work the best. Goat cheese would be a nice addition.

You can also include meats with your stuffing. Chorizo is a great addition, as is ground beef or ground chicken. I also like to include cooked rice or black beans.

If you’re unable to find poblano peppers at your grocery store for whatever reason, you can make this recipe with bell peppers. Either stuff the entire bell pepper with your stuffing mixture and proceed, or slice them in half and stuff the pepper halves.

Check out my Spicy Vegetarian Stuffed Bell Peppers recipe as a reference.

Please don’t forget your seasonings. I used a simple blend of chili powder, cumin, garlic powder and salt and pepper. At least season with salt and pepper. A nice Homemade Cajun Seasoning Blend is great here. It’s pretty much my daily go-to.

It’s also interesting with curry seasonings. Try my Homemade Vindaloo Curry Powder with it. Such a great recipe.

If you’d like a spicier version, include a bit more chili powder. 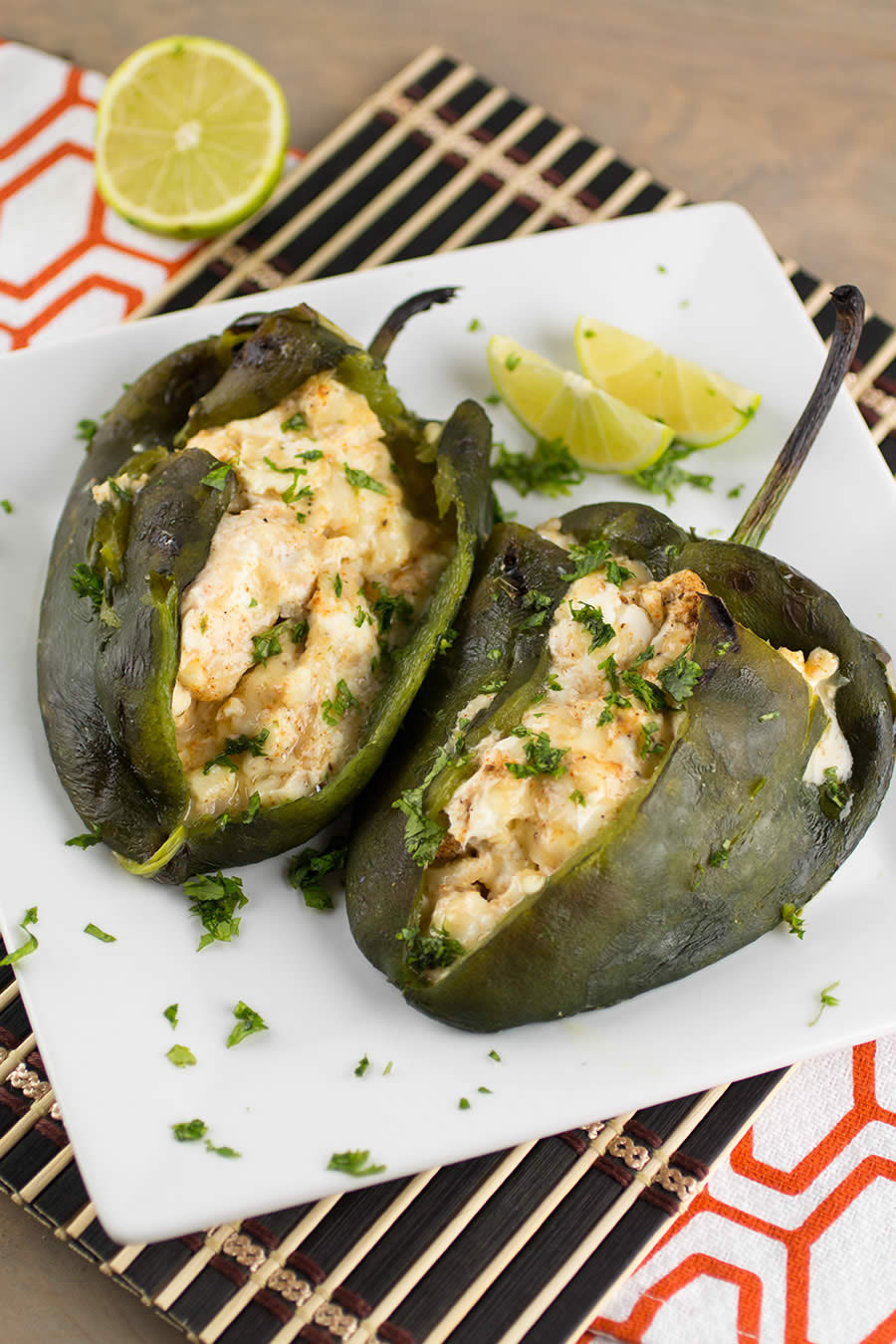 Yummy, ooey-gooey deliciousness. Mike was worried this would be too cream-cheesy, but it was out of this world for me. Bring on the cheese! Who doesn’t love cheese? I have Wisconsin in my blood. I love this recipe. 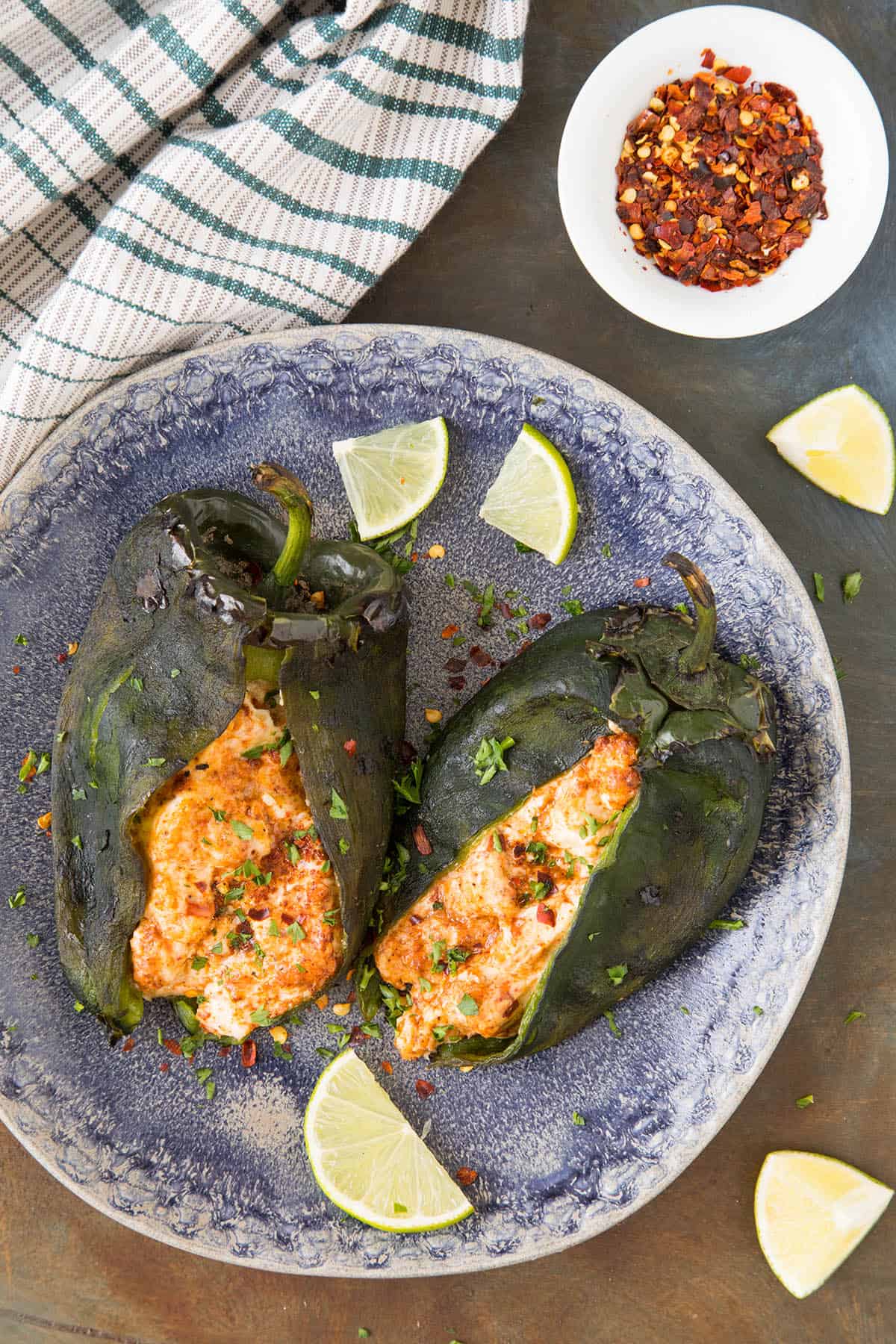 A recipe for earthy poblano peppers that have been roasted and stuffed with cream cheese and white cheddar cheese along with a mixture of seasonings, then grilled or baked until the insides are nice and gooey. One of my favorite stuffed pepper recipes. 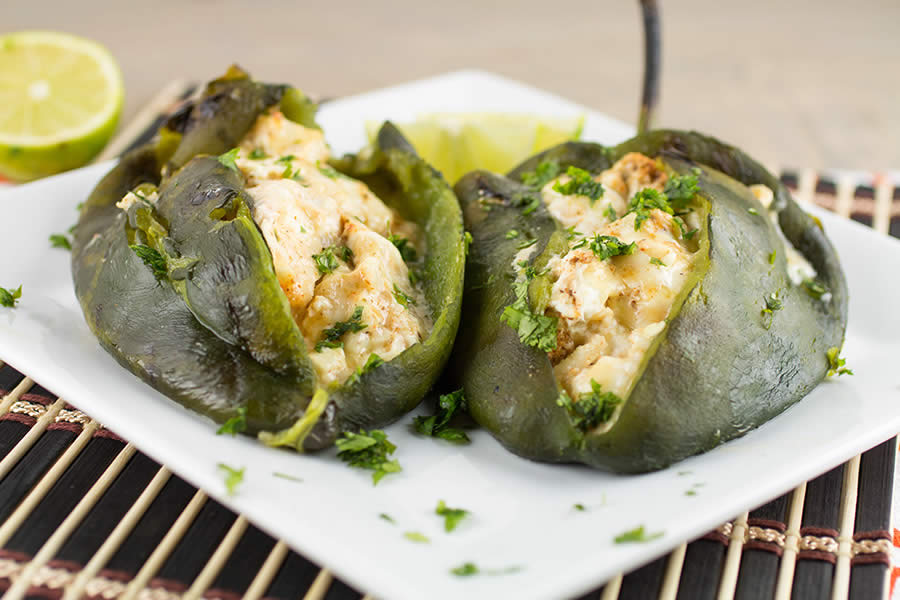 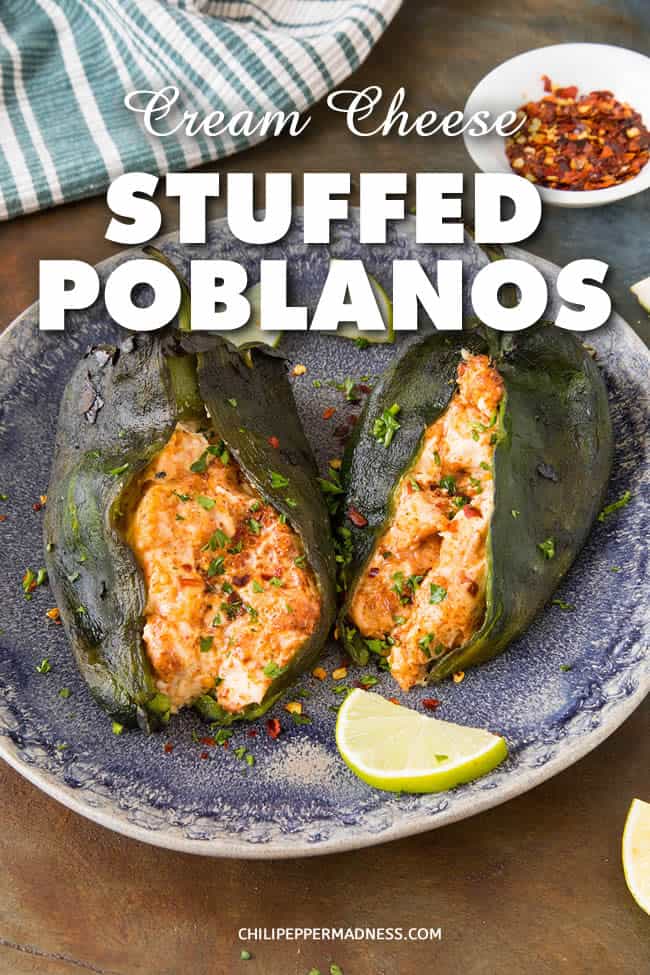