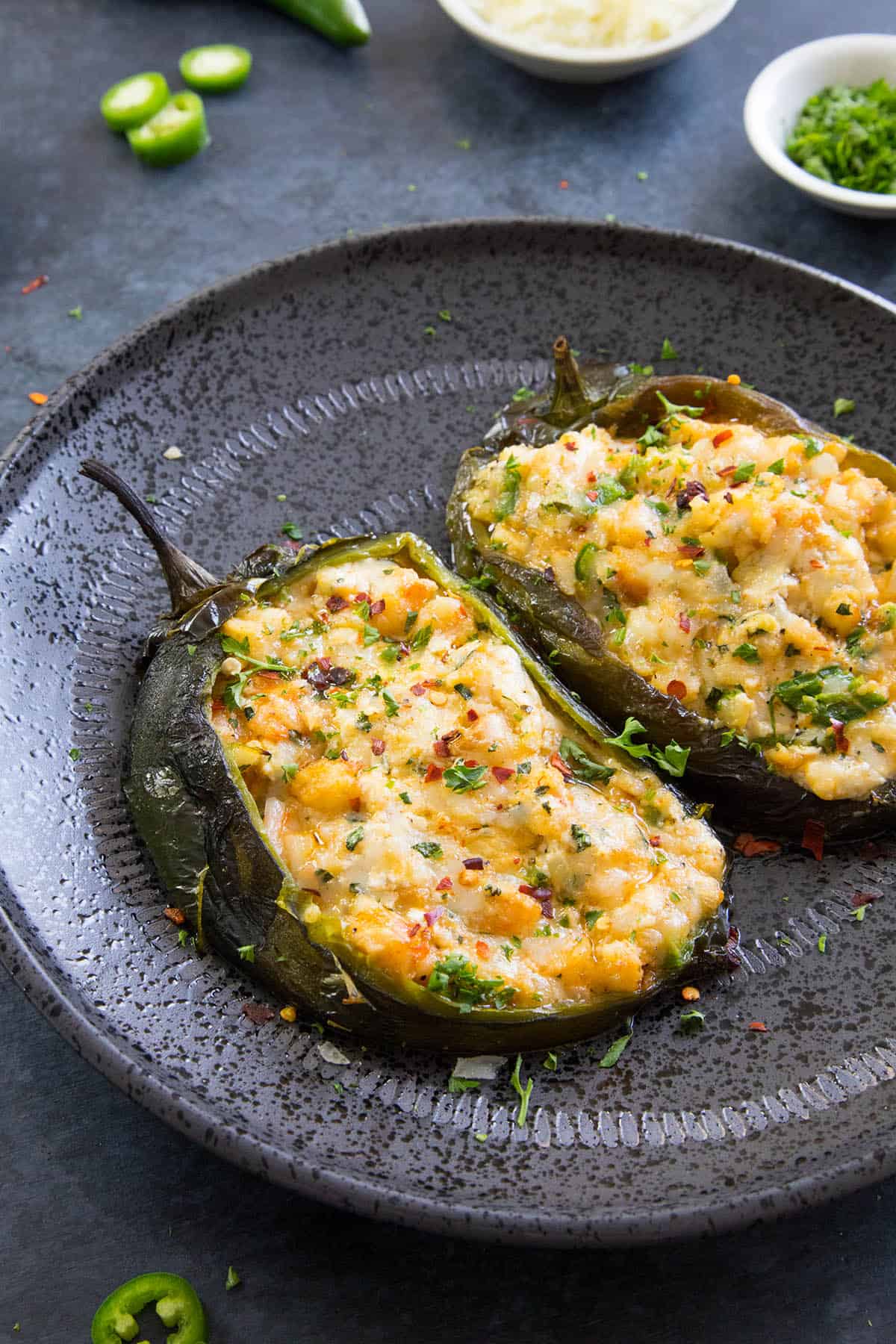 A recipe for gorgeous poblano peppers stuffed with Cajun seasoned shrimp, Manchego and goat cheese, and basil, then baked or grilled.

Once again, I must extoll the wonderful virtues of the stuffed chili pepper. Stuffed peppers are easy to make, satisfy like no other, and allow for a nearly infinite level of creativity. Practically anything you can conceive of can be stuffed into a chili pepper and made better.

You can grill your stuffed peppers or bake them, whichever you prefer. Or how about the crock pot? Today I chose poblano peppers.

I had a couple of these left in the fridge, some decent sized ones, and they were begging me to stuff them. “Please please!” They were calling my name.

And so was the shrimp. Cajun shrimp! 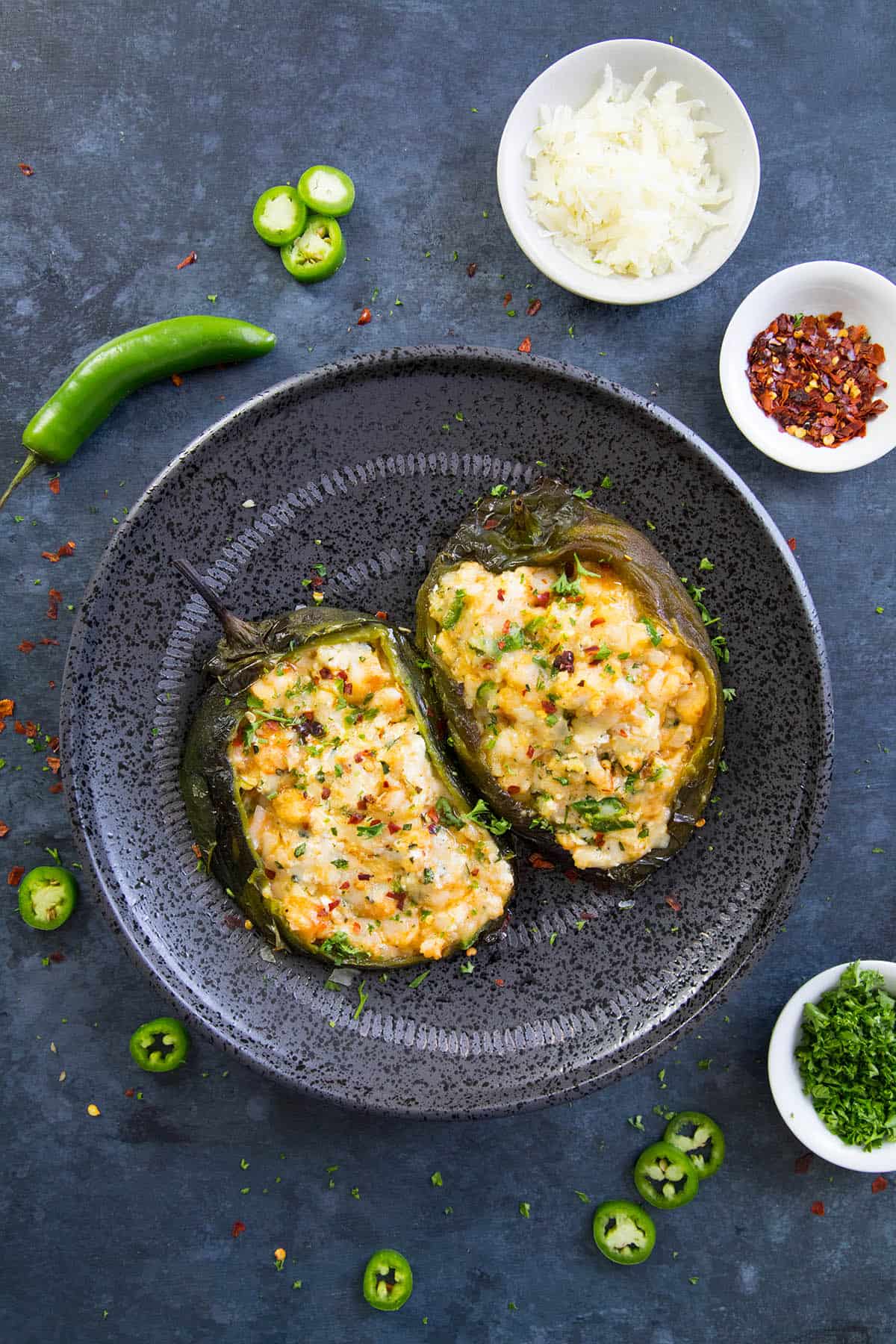 When working with shrimp, Cajun is such a tasty way to go. You don’t often get to mix seafood with cheese in an effective way, but this is one of them.

The combination of Cajun shrimp with the mixture of Manchego and goat cheese, along with the basil and hot sauce — it’s just so good. It defintely belongs on both mine and Patty’s favorite recipes lists.

ONE: First, roast your poblano peppers (more on that below). Cool them slightly and peel off the skins. See: How to Roast Poblano Peppers.

TWO: Next, cook down some onion, jalapeno (or serrano) peppers and garlic in a pan until they are softened up and begin to caramelize. This will add a LOT of flavor. Scoop them into a mixing bowl.

THREE: Season the sear the shrimp in the same pan. I used a good Homemade Cajun Seasoning blend that I love, though you can use your own preferred blend.

FOUR: Chop the cooked shrimp and add them to the mixing bow.

FIVE: Add in your goat cheese, Manchego cheese and fresh basil. If you want to add a bit of heat, splash in a tablespoon or two of your favorite hot sauce here. Mix it all up!

SIX: Slice open the poblano peppers and scoop out the seeds and any of the innards you want to remove. The peppers will be a bit floppy, so be careful not to cut through the back side.

SEVEN: Stuff the peppers with your cheesy-shrimp mixture, then bake them for 20-30 minutes, or until the cheeses are nice and melted through.

EIGHT: Remove, set them onto a serving plate, then garnish with some fresh chopped parsley and spicy chili flakes.

Good stuff! Having a good hot sauce on hand makes for a quick and easy recipe like stuffed peppers.

Roasting the peppers before cooking is not essential, but adds some great flavor to the finished recipe. You can learn how to roast chili peppers here, but here is a simple broiler method.

ONE: First, set your oven to broil. Slice the poblano peppers in half lengthwise and set them onto a lightly oiled baking sheet.

TWO: Broil them for about 10-15 minutes, or until the skins puff up and char and loosen from the pepper flesh. Flip them halfway through the process to get both sides.

Remove them from the oven and let them cool enough to handle.

THREE: Peel off the skins with your fingers. They should remove easily.

I like to roast the poblanos before stuffing, but you can make this recipe without the roasting. If you prefer, simply slice the poblano peppers in half and set them skin sides down on a baking sheet. Stuff them with the cheese-shrimp mixture, then bake them for 30-40 minutes instead of 20-30 minutes.

It helps to add a bit of water to your baking sheet or pan to help soften up the poblano pepper skins. They come out very good this way as well.

You can use your grill to bake these up. Just be sure to use some sort of a pan so the peppers don’t fall apart or fall through the grates.

You can also vary up the cheeses. If you can’t find goat cheese, cream cheese is a good alternative. I love manchego, but any melty cheese can work, such at colby jack or sharp cheddar. 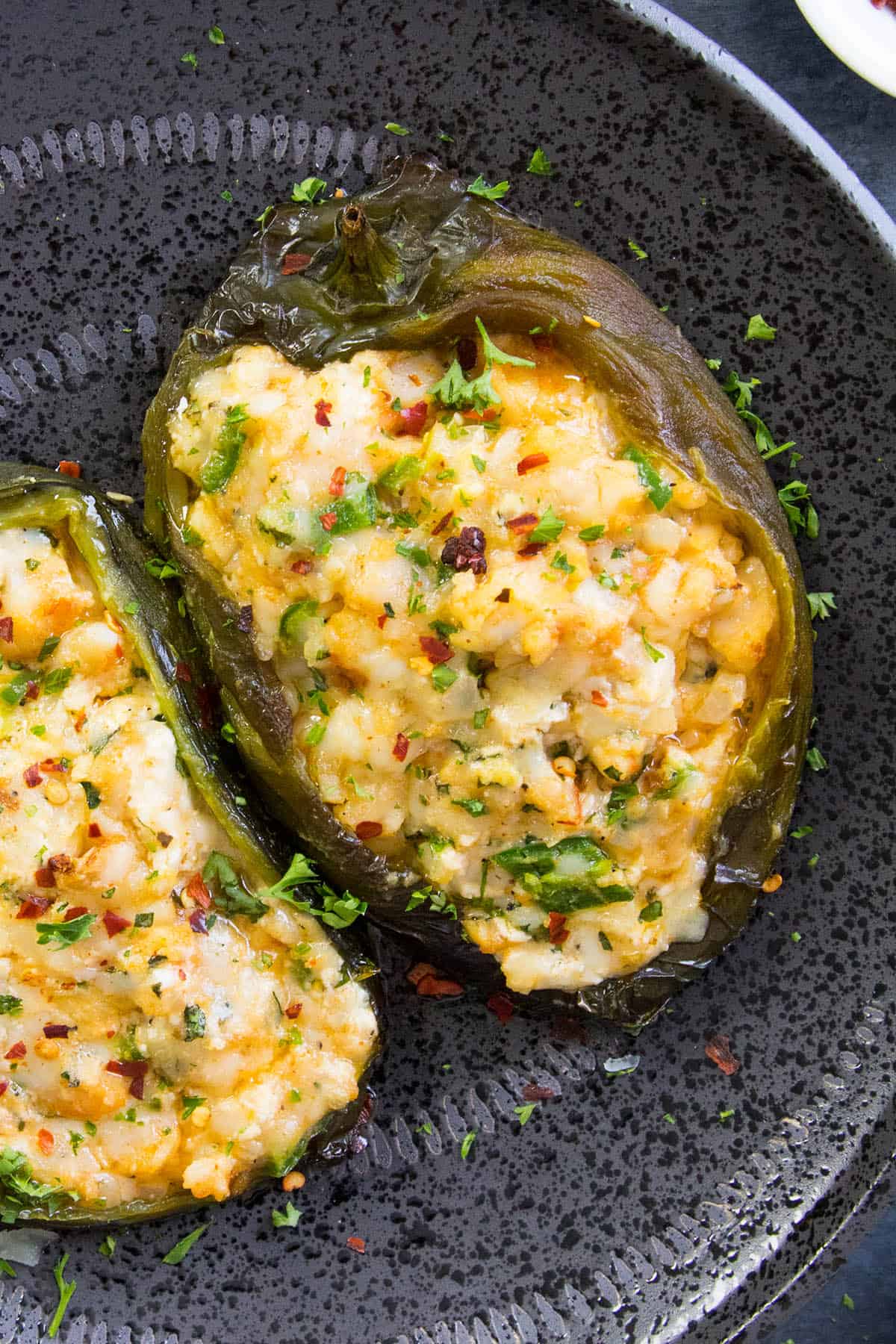 Heat Factor: Mild-Medium, though you can easily incorporation hotter peppers and sauces to spice this up.

These photos are of the recipe made without roasting the peppers. Still delicious! 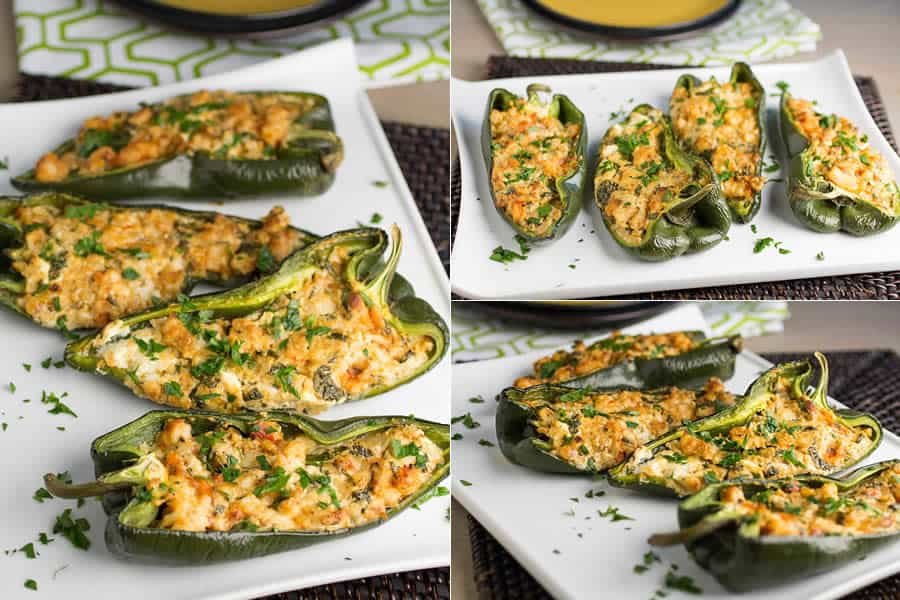 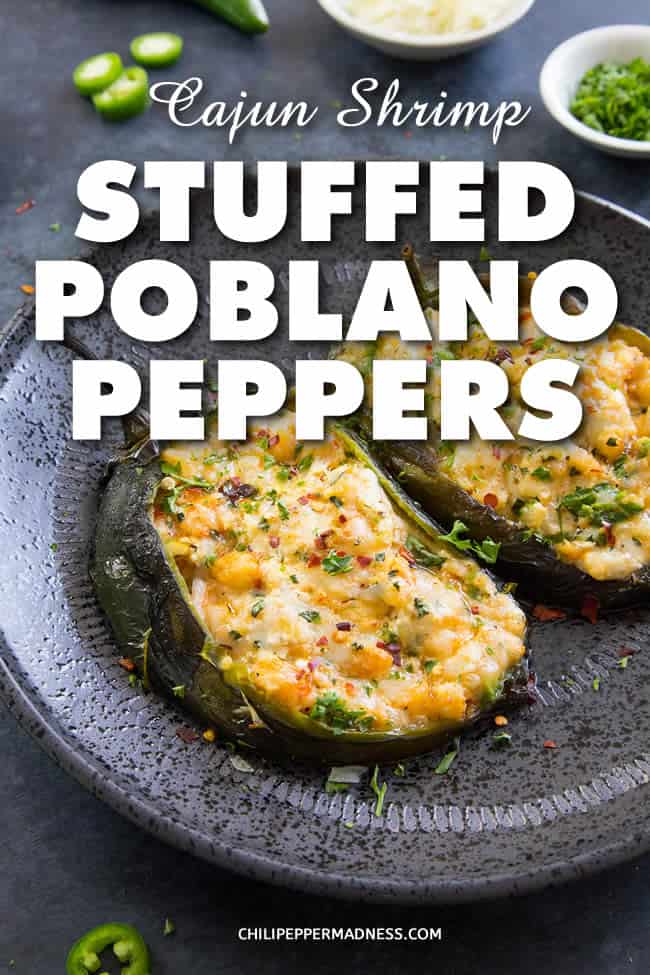