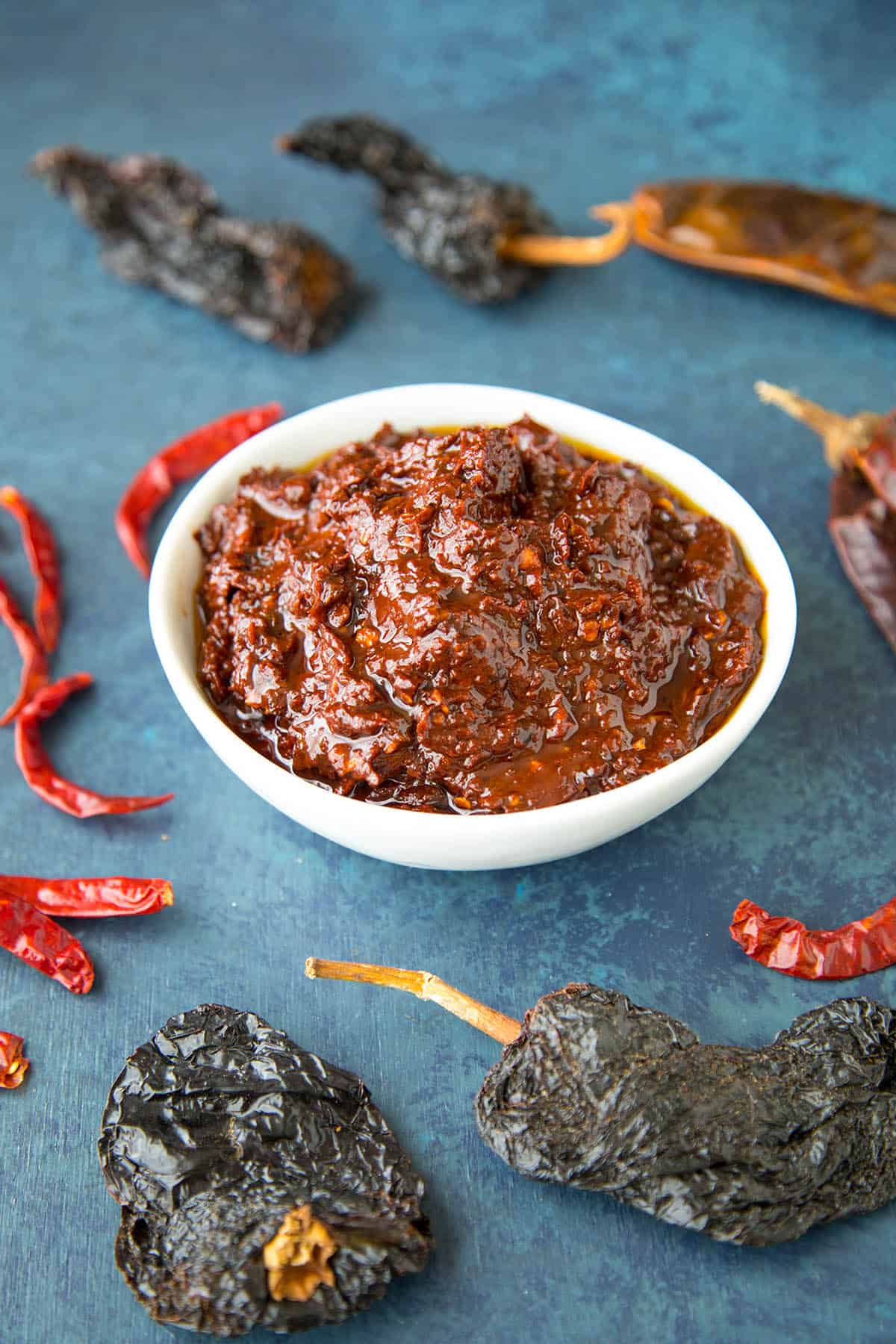 This homemade harissa recipe is the ultimate chili paste with a mixture of chili peppers, oil and seasonings, including cumin, caraway, coriander and more. Learn how to make it.

Ever wonder how to make your own harissa chili paste at home? Here you go. It’s a rather straightforward process, easy in my opinion, but if you don’t cook much, you’ll be doing a few things you’ve never done before, like rehydrating dried chili peppers and lightly toasting fresh seeds and grinding them.

Not a big deal, pretty easy, just new maybe. Or not! 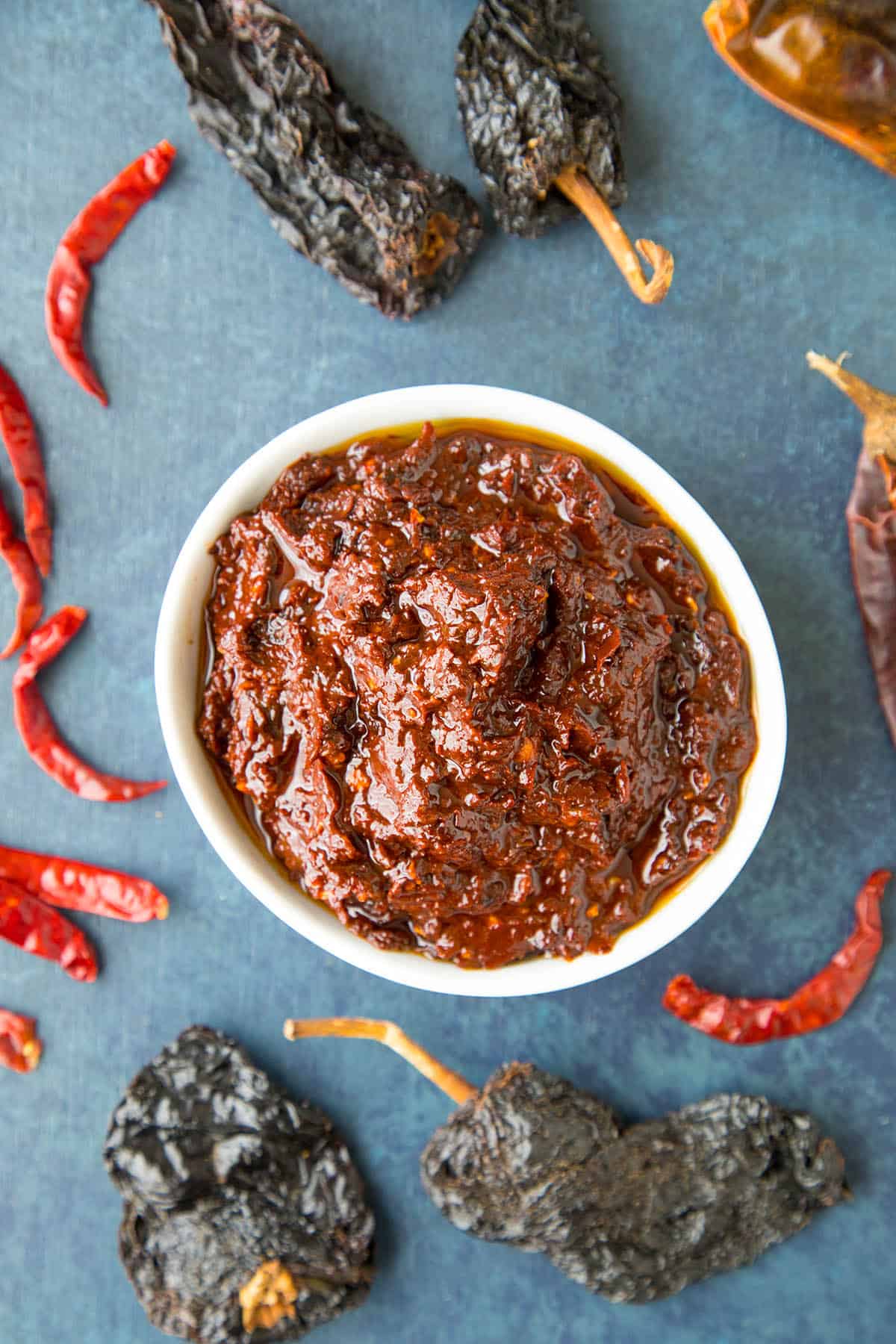 Harissa is a highly popular chili paste used in North African and Middle Eastern cuisine. The recipe varies by the region, so you will find variation after variation of harissa, depending on the local ingredients.

It is typically made from local fresh or dried peppers, along with seasonings like caraway, cumin and coriander seeds, garlic, mint, saffron, paprika and salt. The mixture is blended with oil to form a paste that builds flavor and helps it remain fresher longer.

The Chili Peppers: Commonly used peppers are roasted red peppers, serrano peppers, and Baklouti peppers, though a popular version is to use dried pods, which I use for my recipe.

Let’s talk about making it, shall we?

How to Make Harissa

BOOM! Done. Quite simple, isn’t it?

Rehydrating the peppers only requires some very hot water poured over them, then letting them steep long enough to soften. Once soft, simply remove the stems and innards and process them as needed.

Toasting seeds is easy as well. Toss them together into a dry pan and heat them a couple minutes until they brown slighly.

You’ll smell them, telling you they are ready to grind. Grind them up in a mortar with a pestle, or use an electric grinder, though for a recipe of this size, a mortar will probably work better for you.

What is the Flavor of Harissa?

Harissa has a deeply earthy flavor that is rich and spicy, and it is quite aromatic. The flavors do vary from region to region, based on the peppers and the spices used, but it is always aromatic and concentrated with flavors. A little bit goes a long way, so use sparingly in your recipes.

When working with dried chili peppers, I like to dry toast them in a hot skillet a few minutes before rehydrating them to release their oils. I do this for other chili pastes as well.

You can make harissa without this step, but I find that you’ll achieve a harissa with more depth of flavor from the initial toasting step.

It is also smart to wear gloves when handling hot peppers if your skin is sensitive to the chili oils, which can cause a mild burning sensation.

Can You Make Harissa with Chili Powder Instead?

Yes, you can. Weights can vary from pepper to pepper, but use these measurements for making harissa with chili powder:

You can use other chili powders, such as smoked paprika or red pepper, as well for different tasting chili paste to your preference. If the paste is too loose or watery, add in a bit more powder to thicken it up. If it feels too thick, add in a bit of water or mix in a bit more olive oil.

What Can You Cook with Harissa?

I love swirling harissa into soups or stews, to season fish or rub into chicken. You can also turn it into a wonderful sauce. It adds a nice complexity to your meals, and when you have your own homemade harissa paste on hand ready to go, it will save you a lot of time on that main dish.

Learn More about How to Make Chili Paste from Fresh Chili Peppers – includes links to a variety of recipes.

What is a Substitute for Harissa Paste?

A good substitute for harissa is sriracha. If you’ve found that you’ve run out of harissa for a particular recipe, sriracha will work in a pinch. Sriracha is typically sweeter than harissa, though has a similar flavor profile. You can also try gochujang, which is a Korean chili paste, or sambal oelek, which is a simpler fresh chili paste.

As mentioned, recipes for harissa can and do vary from region to region, depending on the ingredients available to the area as well as personal tastes. This particular recipe is more common, though you can easily alter it to fit your palate.

Consider using roasted peppers of any variety in lieu of tomato paste. Try fresh tomatoes as well, or sun dried tomatoes in oil. Here is one I made recently with a mix of dried and fresh roasted red peppers. It looks a bit different from the original photo, quite a bit more bright red. 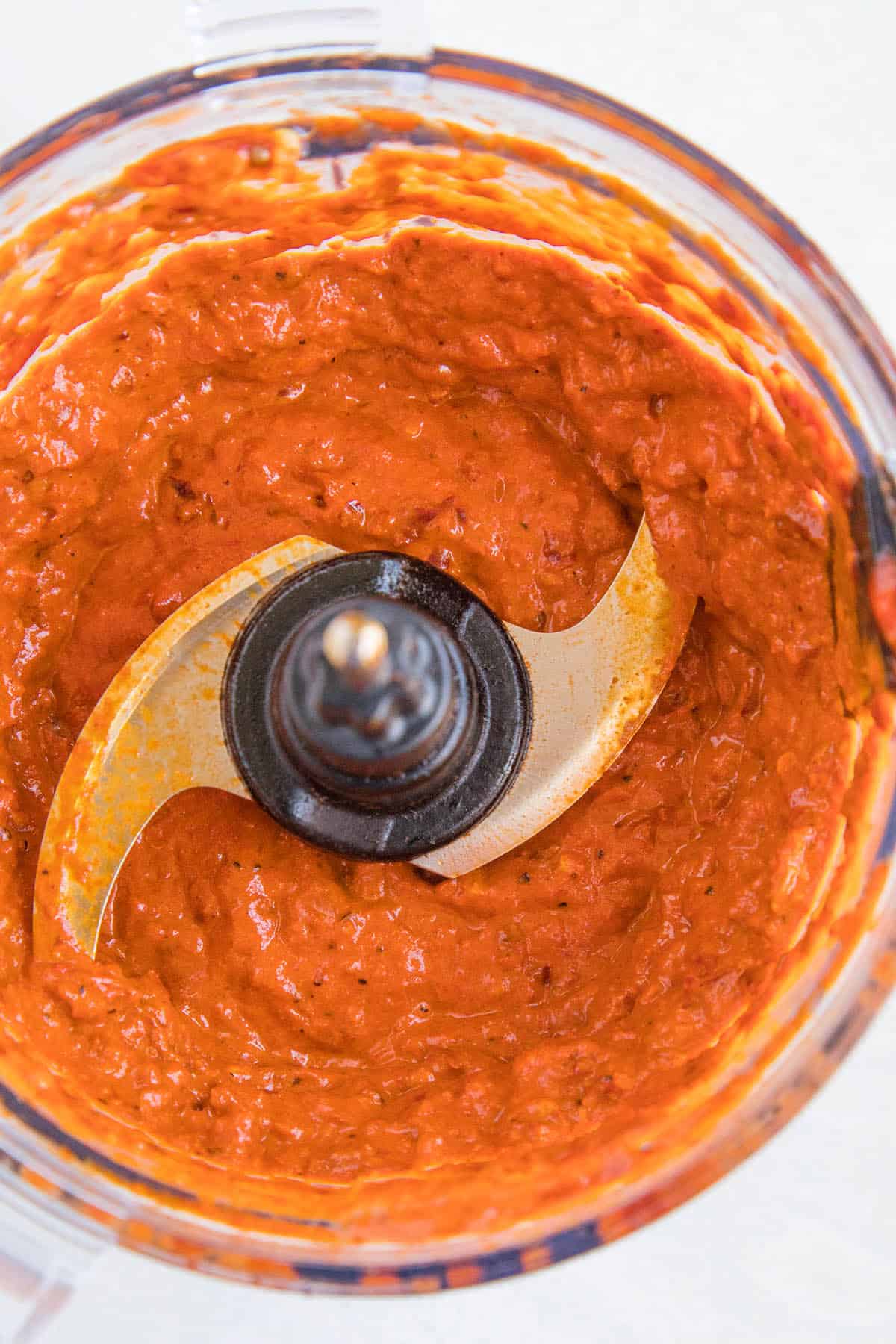 Experiment with different herbs and spices, such as mint, basil, even spicy chili powders or curries. You can also add more oil.

I often will include smoked and dried serrano chili peppers in my harissa as a flavorful variation. See how to smoke chili peppers.

There is no limit to creativity with this recipe.

Is Harissa Paste the Same as Harissa Sauce?

Harissa paste is much thicker than harissa sauce, which is made from a base of harissa with other ingredients to thin it out to more of a sauce-like thickness. Some ingredients to make a harissa sauce from homemade harissa are tomato sauce, stock, or extra olive oil.

What is Harissa Powder?

Does Harissa Have to be Spicy?

Harissa does not have to be spicy. The heat and spice factor depends largely on your choice of chili peppers used to make it. You can make a milder harissa that has no heat yet plenty of spice by using peppers that bear no heat. You can also core out any hot peppers before roasting them to reduce the overall heat. 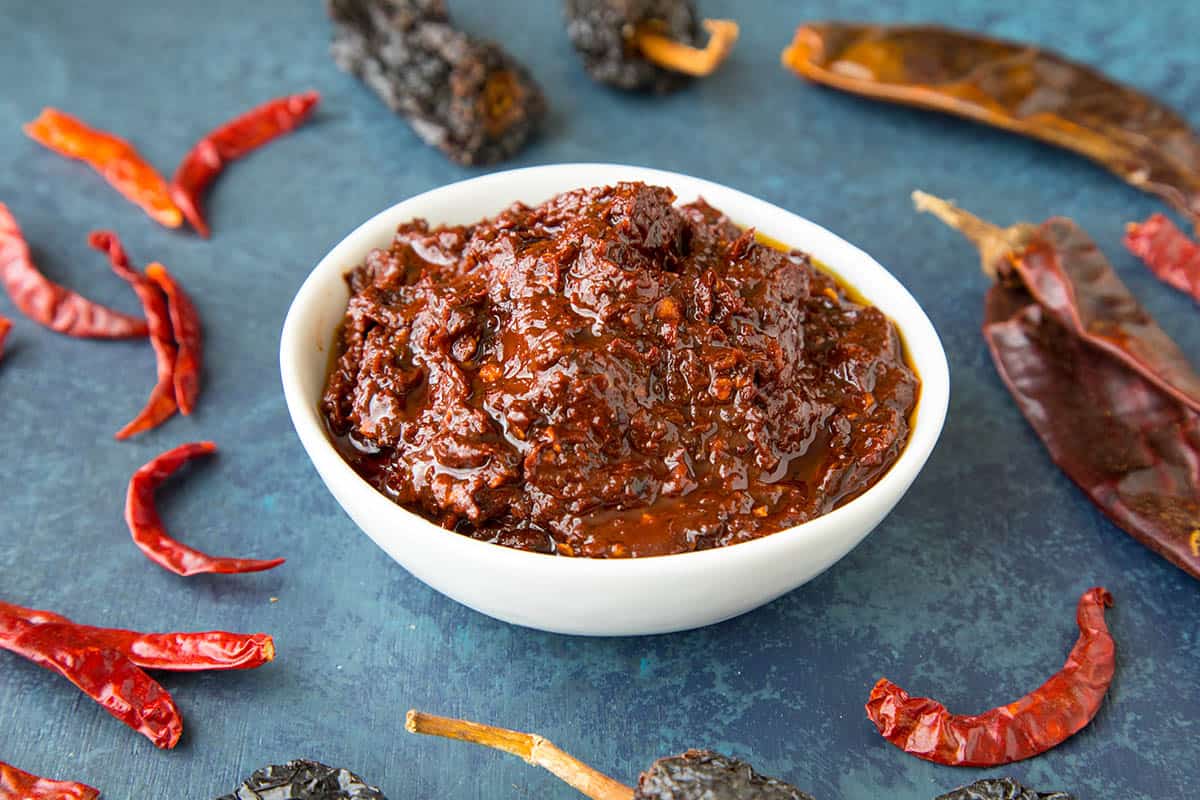 Try Some of These Popular Recipes that Use Harissa

Try These Other Popular Recipes, Too!

Store in the refrigerator. Because of the use of garlic in this recipe, use within a week. NOTE: I prefer to dry toast the dried peppers in a hot skillet a few minutes before rehydrating them to release their oils, though you can make harissa without this step.

This recipe was updated with new photos and a video. Previously published on 5/20/2015. 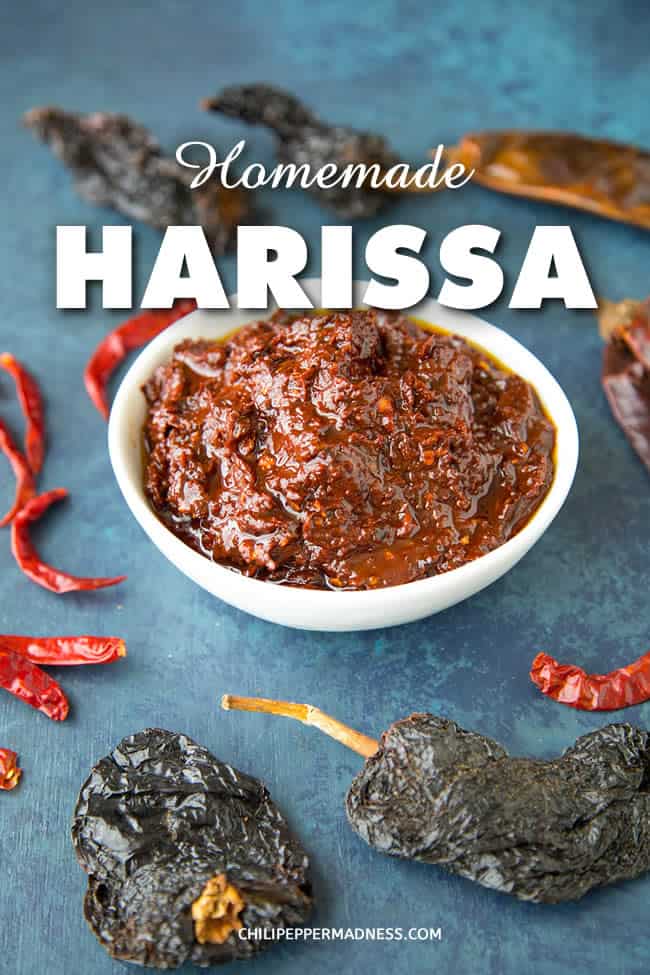