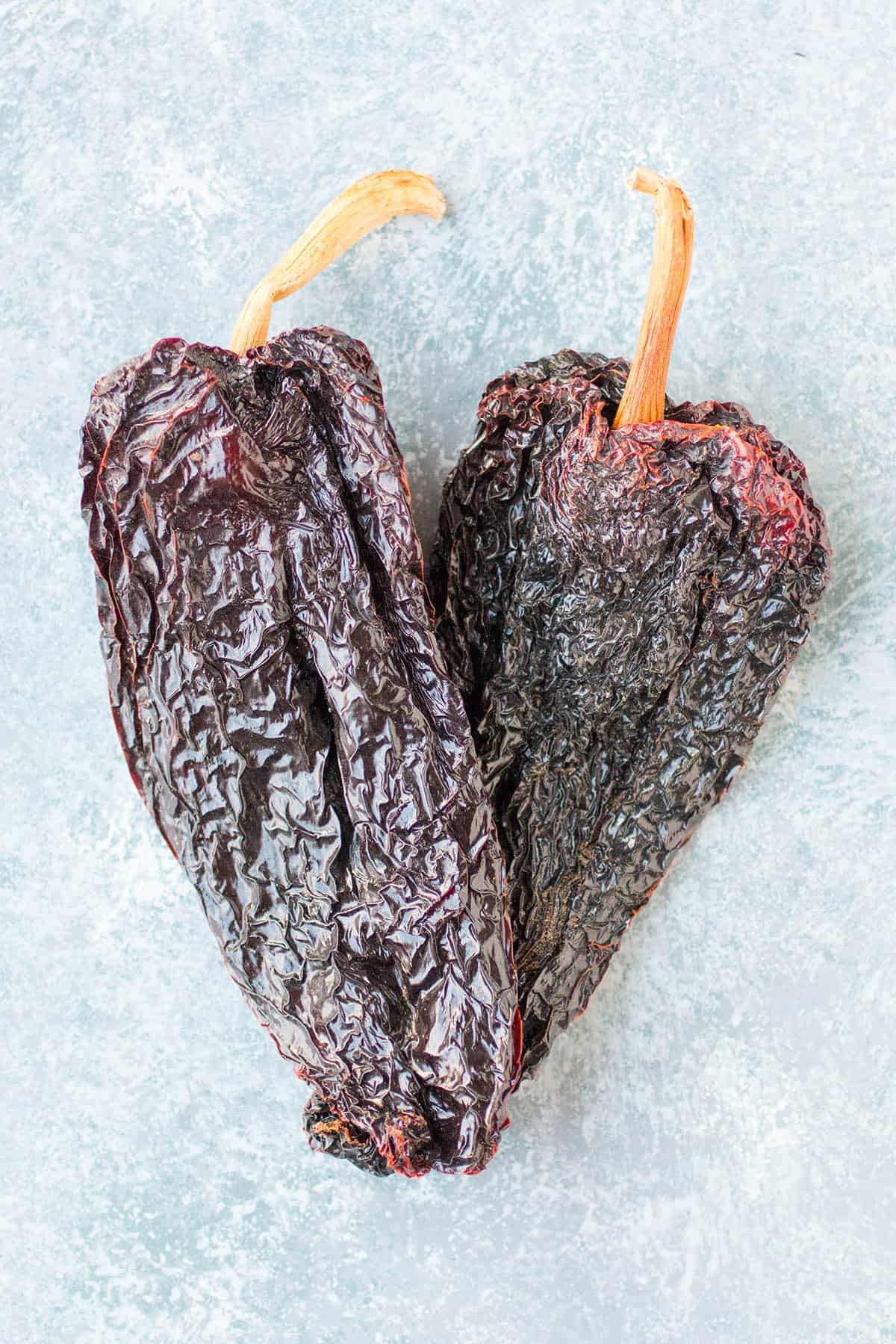 The Ancho Pepper is the dried form of the poblano pepper, and one of the most popular peppers in Mexican cuisine. It is know for its smoky quality, with sweet to moderate heat and a mild paprika flavor. Learn more about it here.

The Ancho Pepper is the dried version of the poblano pepper, and one of the most popular peppers in Mexican cuisine as well as Tex Mex cooking and of the southwest U.S. It is so important, in fact, that the peppers get their own name after being dried. Instead of simply calling them “dried poblanos”, they are called “ancho peppers”.

They originate in the state of Puebla, Mexico. They are made when poblano pepper are allowed to stay on the vine to ripen until they turn red, then harvested and dried.

This process effectively preserves the peppers, giving them much longer kitchen life. Mexican cooks and cooks around the world keep them stored in their cupboards where they can easily be retrieved for adding flavor to any number of recipes, from soup and stews to salsas and sauces.

The peppers are known for their rich smoky quality, with sweet to moderate heat and a mild paprika flavor. 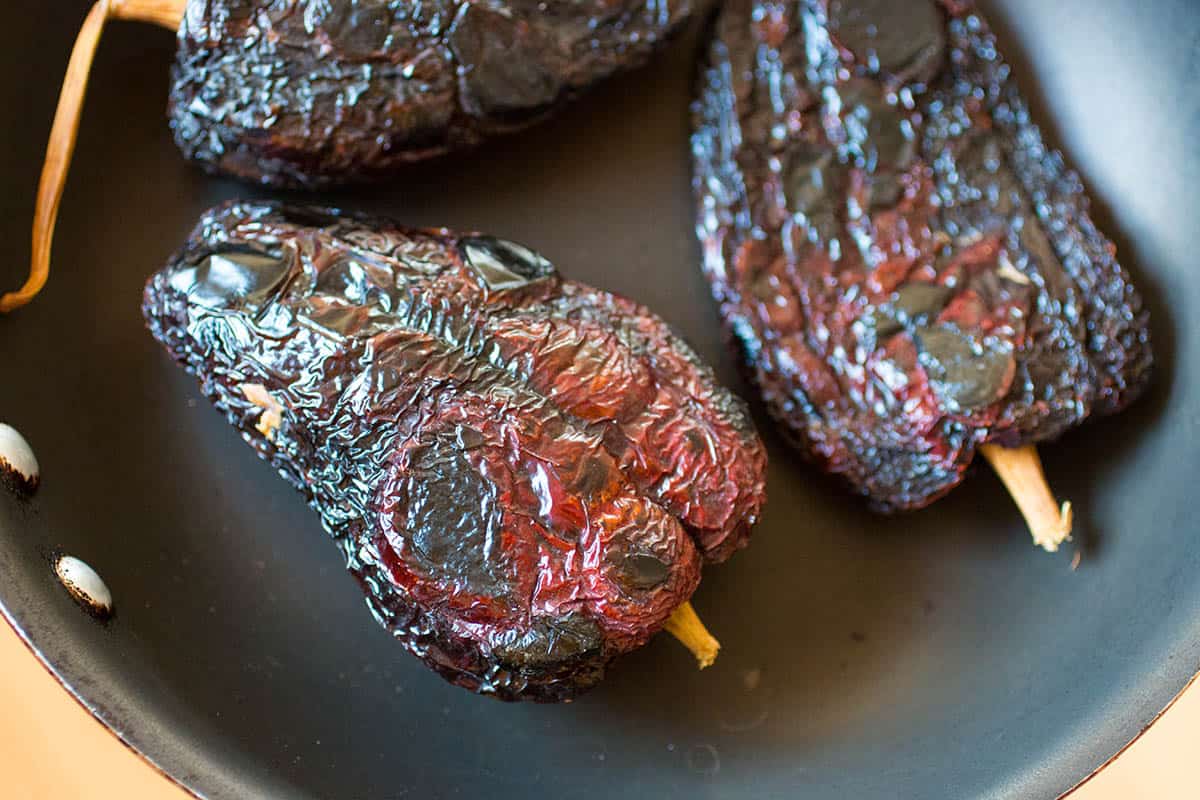 How Hot is an Ancho Pepper?

The ancho pepper is considered to be of mild heat, though there is a bit of a kick to them. They measure between 1,000 – 2,000 Scoville Heat Units (SHU) on the Scoville Scale. Compare that to a bell pepper, which has no heat and measures at 0 SHU and a jalapeno pepper which averaged about 5,000 SHU, you will find that the ancho pepper is 2.5 to 5 times milder than a jalapeno. 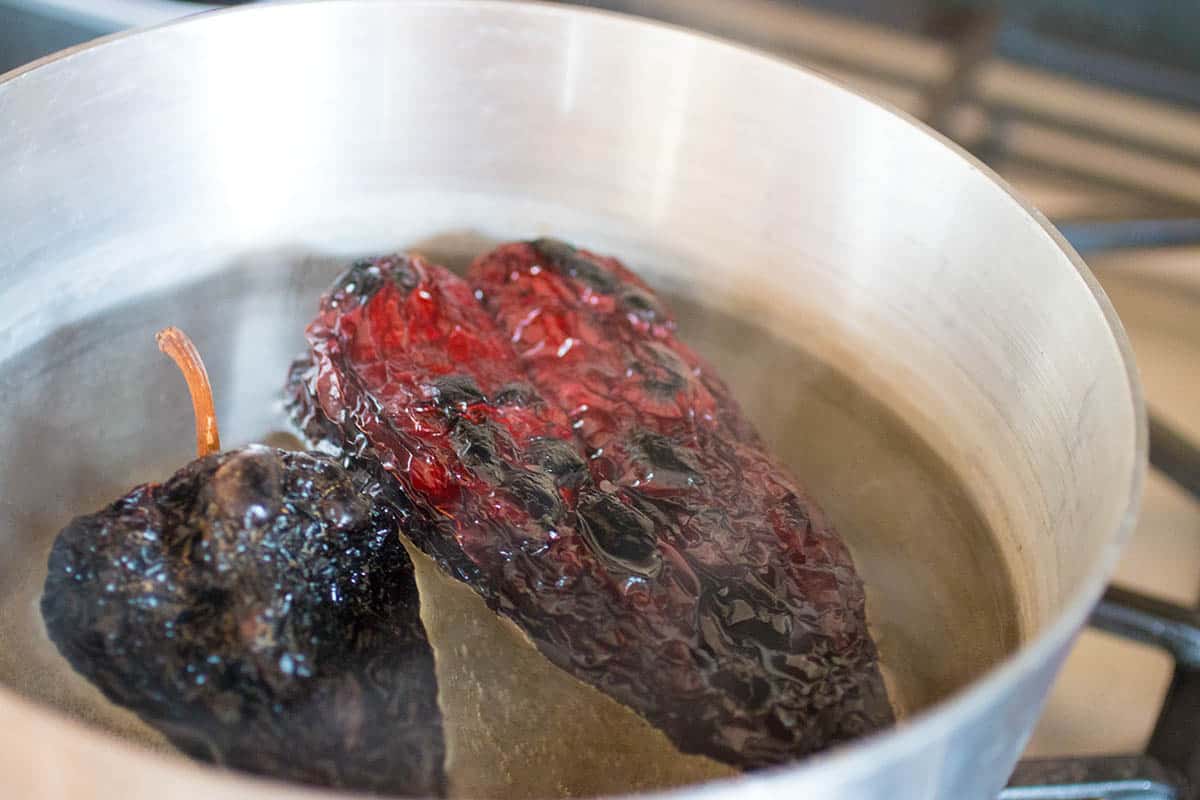 Just like any dried chili pepper, ancho peppers are usually rehydrated before using for cooking. The process involves soaking the ancho peppers in very hot water for 15 to 30 minutes until they are softened. They are normally seeded and stemmed first. Once they are rehydrated, ancho peppers is commonly used for making thick sauces, such as mole sauce or adobo sauce or enchilada sauce. The Ancho is used to add flavor, heat, and color to the sauces, as well as the distinctive red color.

Anchos, along with pasilla and guajillo peppers, are sometimes said to comprise the “holy trinity” of Mexican chile peppers, sometimes along with the dark mulato pepper, though that is a very loose term.

Dried ancho chile peppers can also be ground into chili powders which are used for general seasonings, and important for making sauces and big pots of flavorful chili. 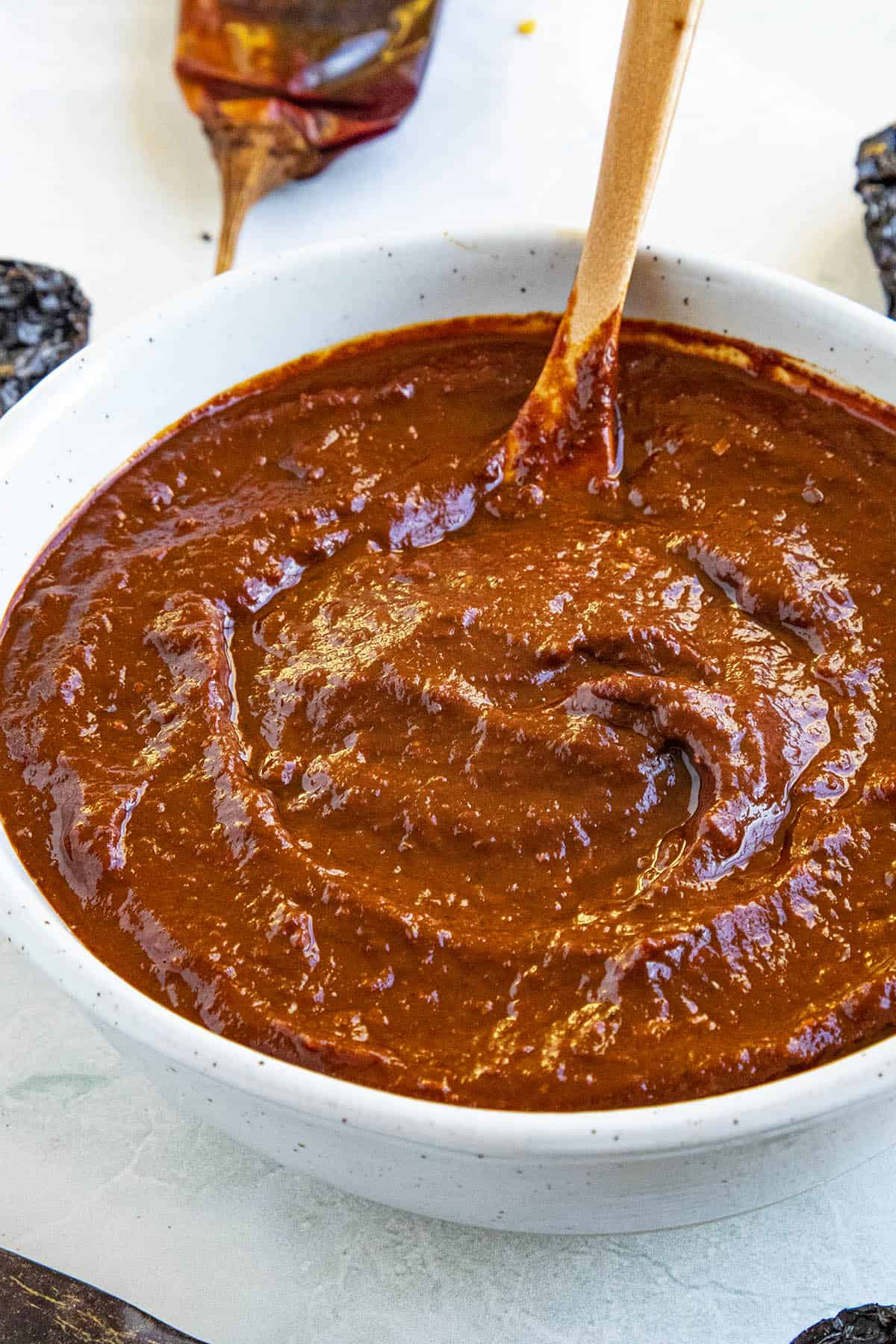 Ancho peppers are much different in many ways from poblano peppers, even though they are made from them. Poblano peppers offer an earthy flavor, though they are quite vegetable when fresh, perfect for stuffing for recipes like chile rellenos, or for making classic dishes like rajas poblanas.

Anchos, being dried chiles, are even earthier and quite complex in flavor. They aren’t meant for stuffing, but rather for either grind into chili powders or rehydrating for making sauces and more. 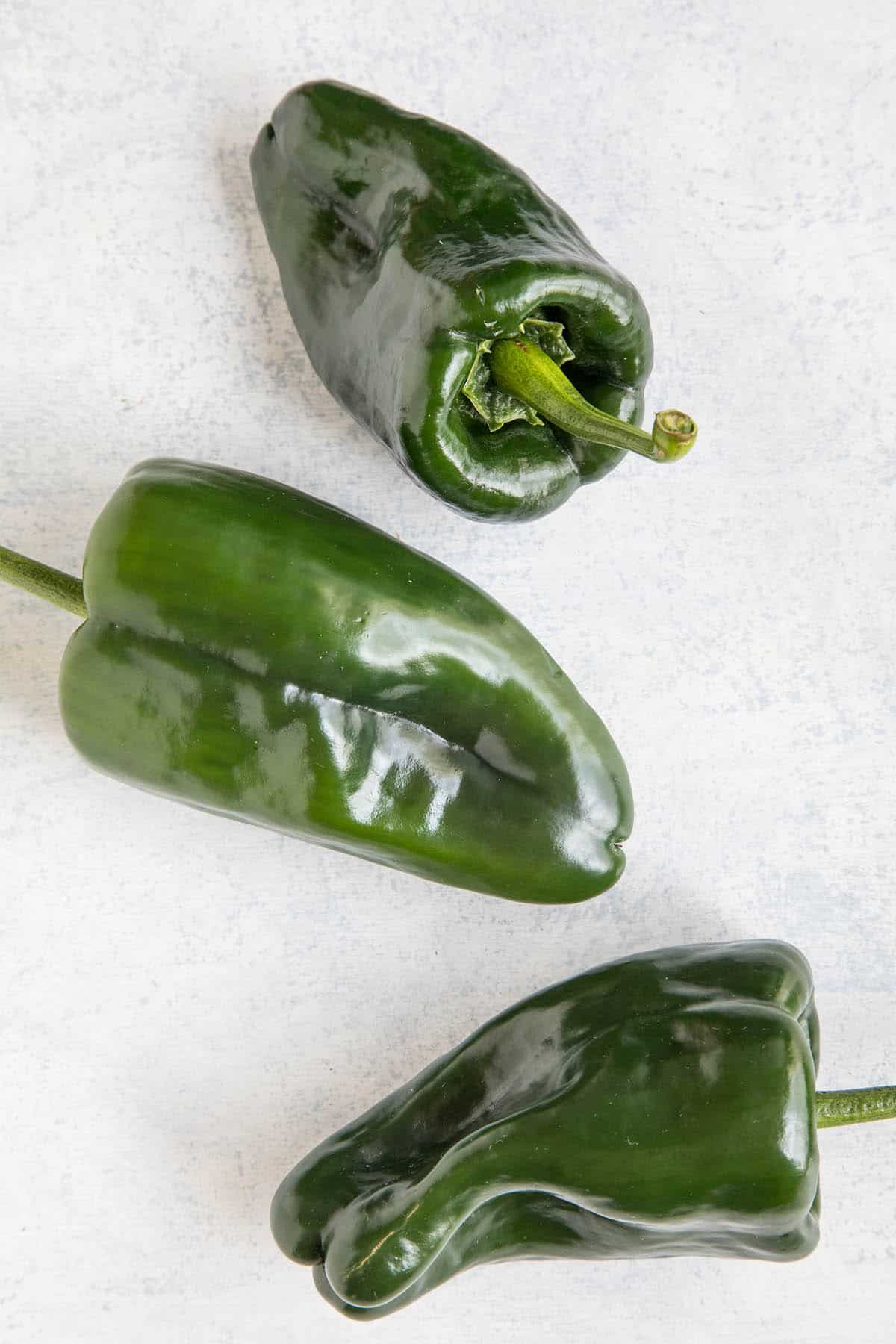 Can I Substitute Guajillo Peppers for Ancho Peppers?

Yes, you can use guajillo peppers in place of dried ancho chiles in any recipe, though the flavors are not identical. Anchos have an earthier, darker flavor, where guajillos are a bit fruity with notes of green tea. They actually work wonderfully when used together.

Where Can I Buy Ancho Peppers?

I always find them in either the fresh produce section or the Mexican section of my local grocery store, though you can find them as a local Mexican grocer, if you have one nearby. If you are unable to find them locally, you can easily Buy Ancho Peppers from Amazon (affiliate link, my friends!).

I hope you enjoy them!

Try Some of My Recipes that Use Ancho Chili Peppers

Got any questions? Ask away! Drop me a line anytime and I’ll see how I can help. Enjoy.