How to Make Chili Oil 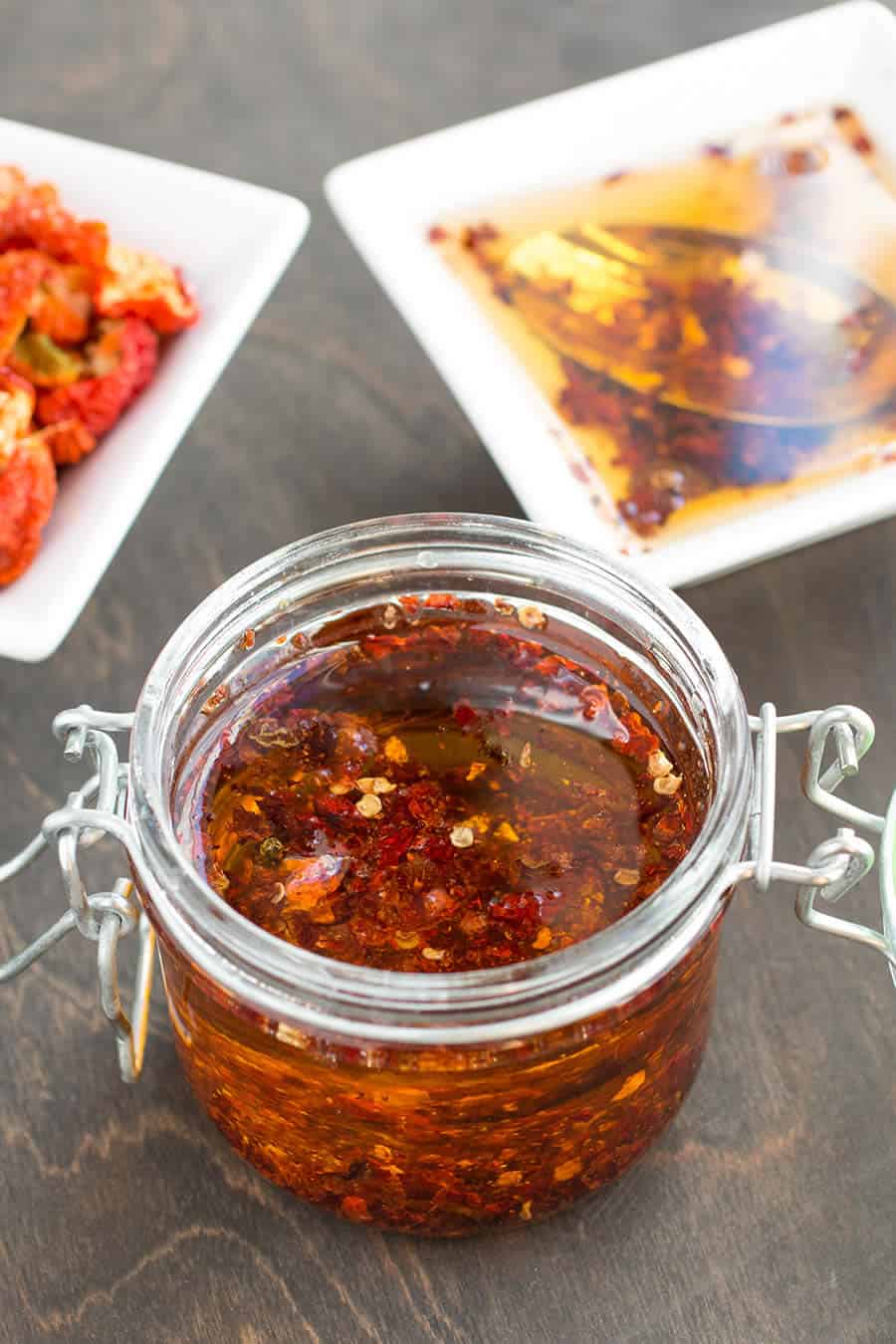 Learn how to make a simple chili oil at home with this quick and easy recipe. Homemade chili oil is great for drizzling over foods for extra spice and flavor,  for mixing into sauces and vinaigrettes, as well as for cooking many meals.

I purchase chili oils for all sorts of recipes. They’re pretty standard in certain parts of the world. They figure prominently in Chinese and Japanese cooking, and in many parts of Asia, although the Italians enjoy their own version as well.

I like to always have a good brand on hand, but sometimes it is more efficient to make your own when you need a small batch, or even to give as a gift. Perfect for any time of year, right?

Besides, making chili oil from scratch in incredibly easy, and it’s also fun to make your own variations with flavors you’ll never find anywhere else. Best to have your own chili oil recipe on hand.

What is Chili Oil?

A typical chili oil is made from a vegetable oil that has been infused with your chili peppers of choice. I’ve included a recipe below for a very simple superhot version made with a blend of dried 7-Pots and Scorpion chili peppers, though you can use any type of pepper you’d prefer.

You can use most types of vegetable oil, though a neutral oil is ideal for highlighting the chili pepper flavor. Canola oil is popular for making chili oil, as is peanut oil. You can infuse any oil, however, with chilies, such as olive oil or even sesame oil.

The general process is simple.

Heat the oil, then add dried peppers and other seasonings and ingredients, then allow to cool, thus infusing the oil with heat and flavor.

Let’s run through the chili oil recipe process, shall we?

How to Make Chili Oil – the Recipe

First, gather up the following ingredients:

Next, add thte oil, dried peppers and salt (if using) to a small pot and stir. Heat to medium-low heat and stir often for about 5 minutes.

Do not allow the oil to smoke. If it smokes, remove it from the heat to reduce the temperature. The goal is not to boil the oil, but to slowly simmer it, allowing the flavors of the peppers to infuse it.

After 5 minutes, remove from heat and cool to room temperature. You can simmer longer to infuse even more flavor. Pour it into a bottle or jar and seal it. You can strain it if you’d like.

BOOM! Done! Super easy, isn’t it? Soon you’ll be making chili oils of your own and drizzling it over anything and everything.

Refrigerate and use within a month.

What Other Ingredients Can Be Used to Flavor Chili Oil?

There are many, many possibilities to explore your creativity. 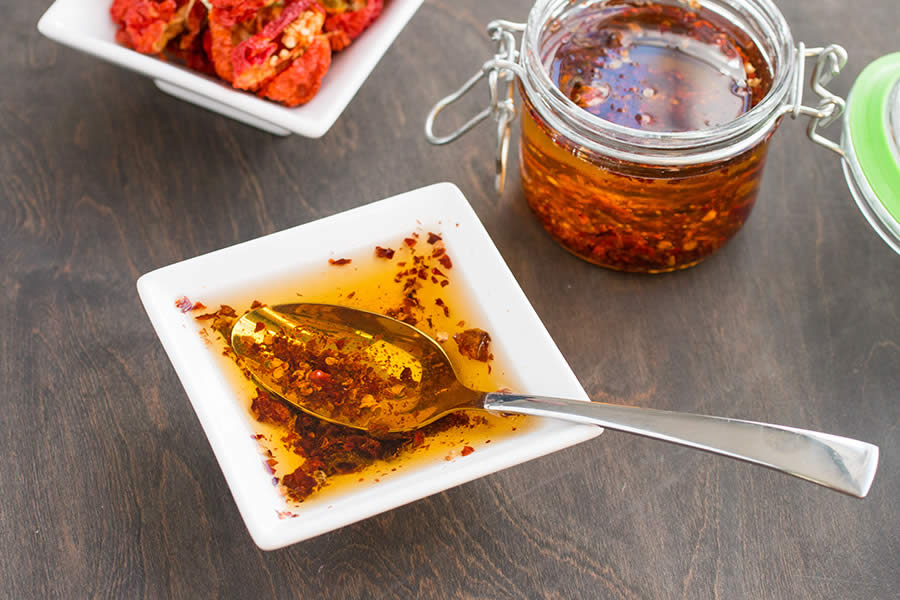 The key to making proper chili oils is to prevent the oil from getting too hot, which can burn your peppers and other ingredients.

If your oil begins to smoke, then it is too hot and you’ll need to reduce your overall temperature. Remove it from the heat source immediately and allow it to cool.

You can serve the resulting chili oil as a condiment or stir it into a variety of dishes, like stir fries, noodles, dressings, drizzles and more. You can keep the peppers in the oil and serve it that way, or strain and serve only the oil.

The dried peppers that eventually sink to the bottom of the oil are called the “sludge,” and can be served on their own in a variety of applications. I’ve seen some chili oils with a thick sludge on the bottom, which can be used in recipes all by itself. So good!

You can also cook with it as you cook with other oils, such as olive oil.

If you prefer your chili oil strained, you can easily pour the finished oil through a thin sieve or even cheese cloth to remove the peppers/sediment, depending on how finely you chop/crush the peppers.

You can also include whole dried chili peppers into the oil, which can be decorative.

Try Some of my Other Infusion Recipes 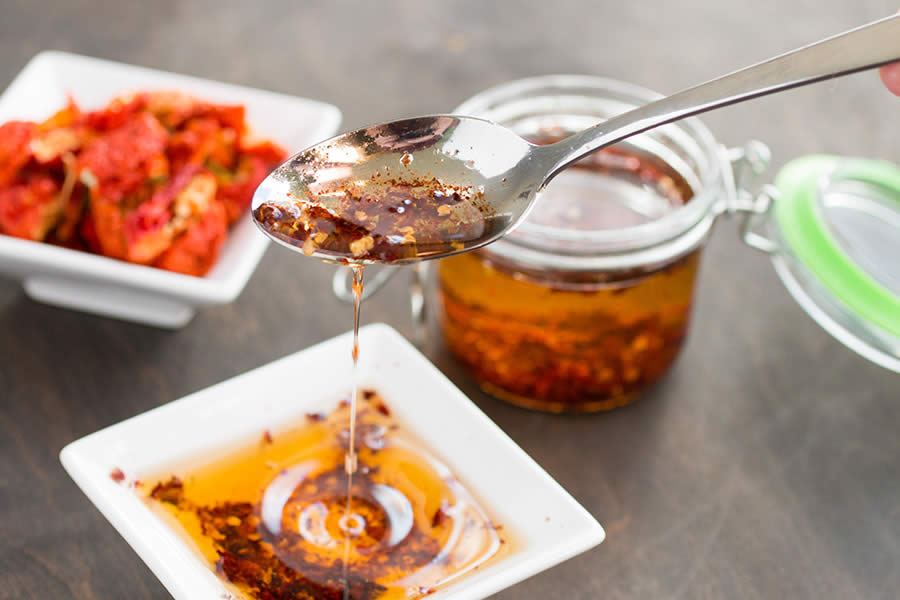 Heat Level: Varies, depending on the chili peppers used. 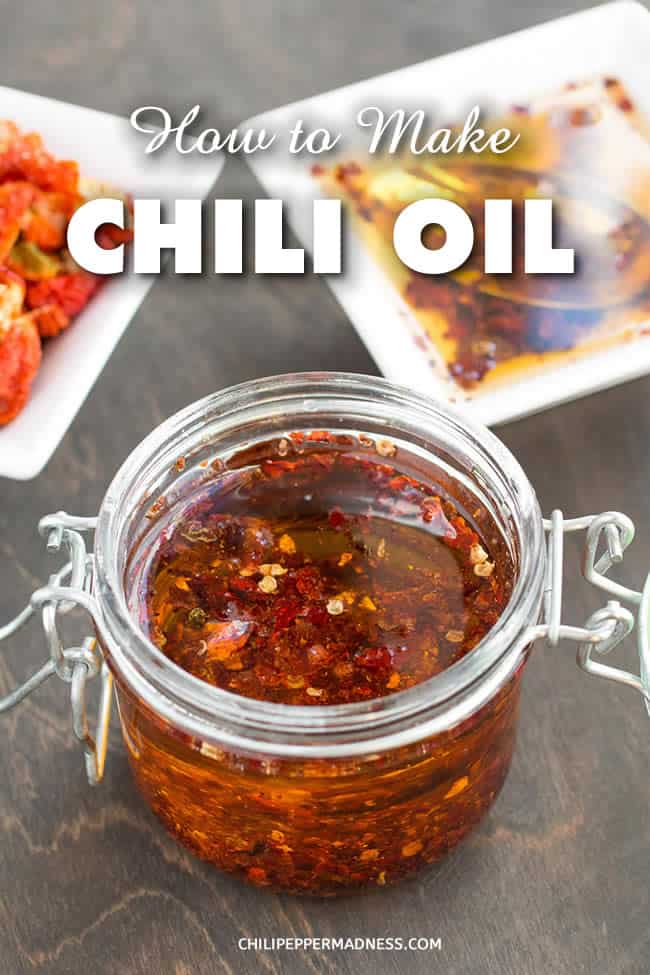