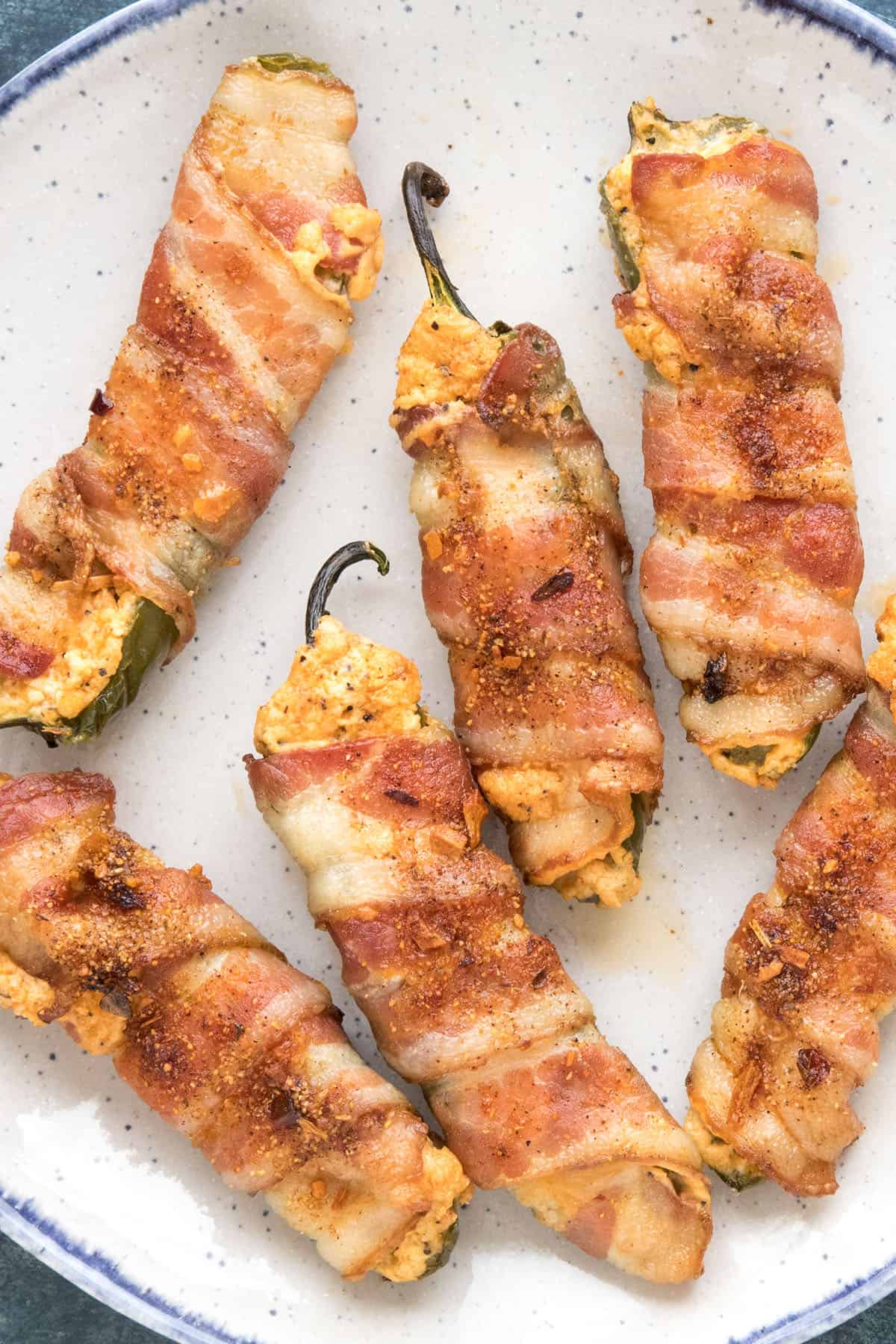 Jalapeno poppers time, my friends. In my kitchen, it’s ALWAYS time for jalapeno poppers, especially when they’re stuffed with cheesy awesomeness and wrapped in bacon.

As you already know by now, I have quite the obsession with all things jalapeno and all things poppers. #MikesJalapenoObsession. It’s been pretty well documented here, considering all of my Jalapeno Poppers Recipes on the site, and not to mention my cookbook dedicated to the subject – Jalapeno Poppers and Other Stuffed Chili Peppers, the Cookbook.

I just can’t help myself!

They really are the perfect party appetizer, holiday gathering starter, game day table centerpiece, you name it – if there is a party of any sort, you need jalapeno poppers there to make everyone happy. Like this recipe in particular. We’re talking easy, cheesy Bacon Wrapped Jalapeno Poppers and they’re every bit of fabulous as they sound.

These poppers are filled with a seasoned mixture of cream cheese and cheddar cheese, all stuffed into cored out jalapeno peppers than wrapped in smoky bacon and baked to crispy perfection. Oh baby. 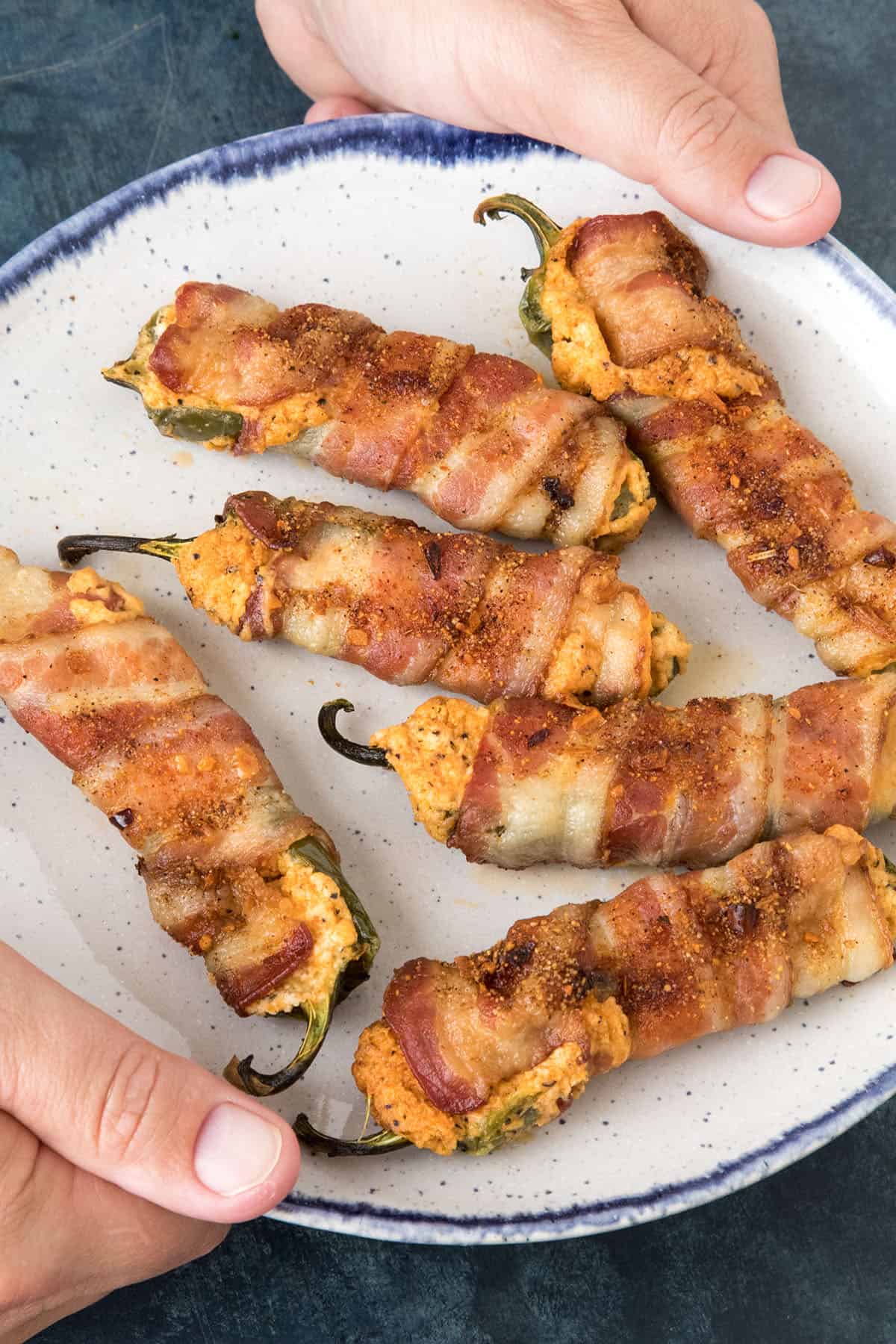 I want to eat them all right now! The party peeps wouldn’t be very happy with me, though.

Let’s talk about how we make them, shall we?

How to Make Bacon Wrapped Jalapeno Poppers – The Recipe

First, slice open your jalapenos in half lengthwise and scoop out the insides, making them hollow enough for your stuffing. 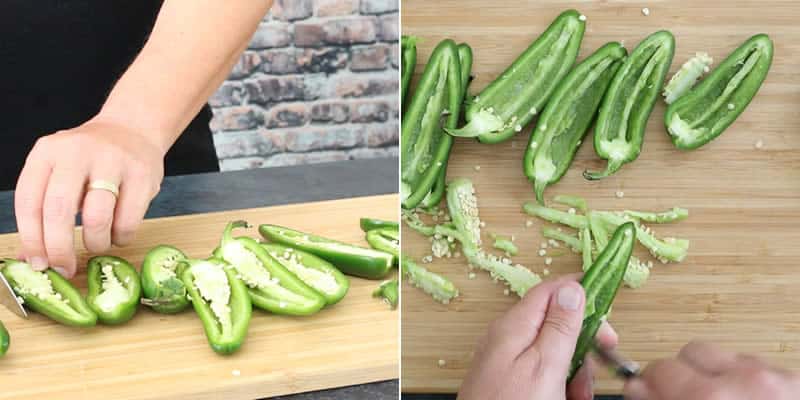 Next, mix your cream cheese (at room temperature for easier mixing), cheddar cheese and your seasoning mixture in a bowl, then fill each jalapeno pepper half with the spicy cream cheese mixture.

A note about jalapeno heat: Most people believe that removing the seeds will reduce the jalapeno heat. However, the seeds actually contain no heat. Most of the jalapeno heat is in the cored out whitish innards, so if you’d like spicier jalapeno poppers, chop it up and mix it in with your cheese mixture. 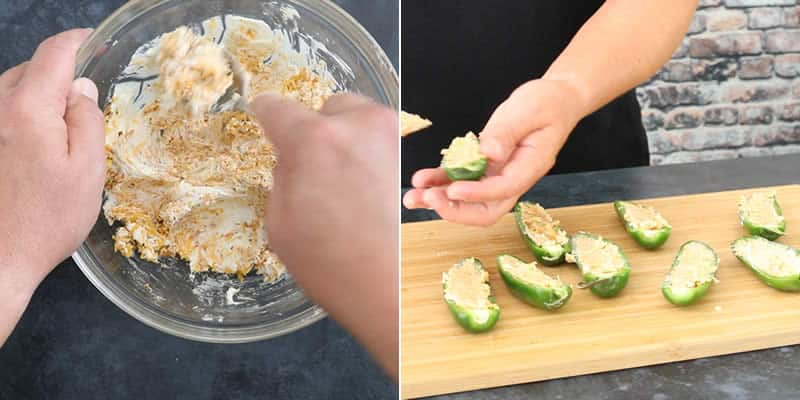 Next, wrap each stuffed jalapeno boat with a slice of bacon. Pierce with toothpicks to hold the bacon in place for baking.

Sprinkle the poppers with extra chili powder and set them on a baking sheet and preheat the oven to 350 degrees F. Bake them for 20-30 minutes, or until the peppers soften and the bacon is starting to crisp.

You can blast them with the broiler a couple of minutes at the end if you need to in order to get them as crispy as you’d like.

Check out my video below for a full demonstration of how to make bacon wrapped jalapeno poppers. 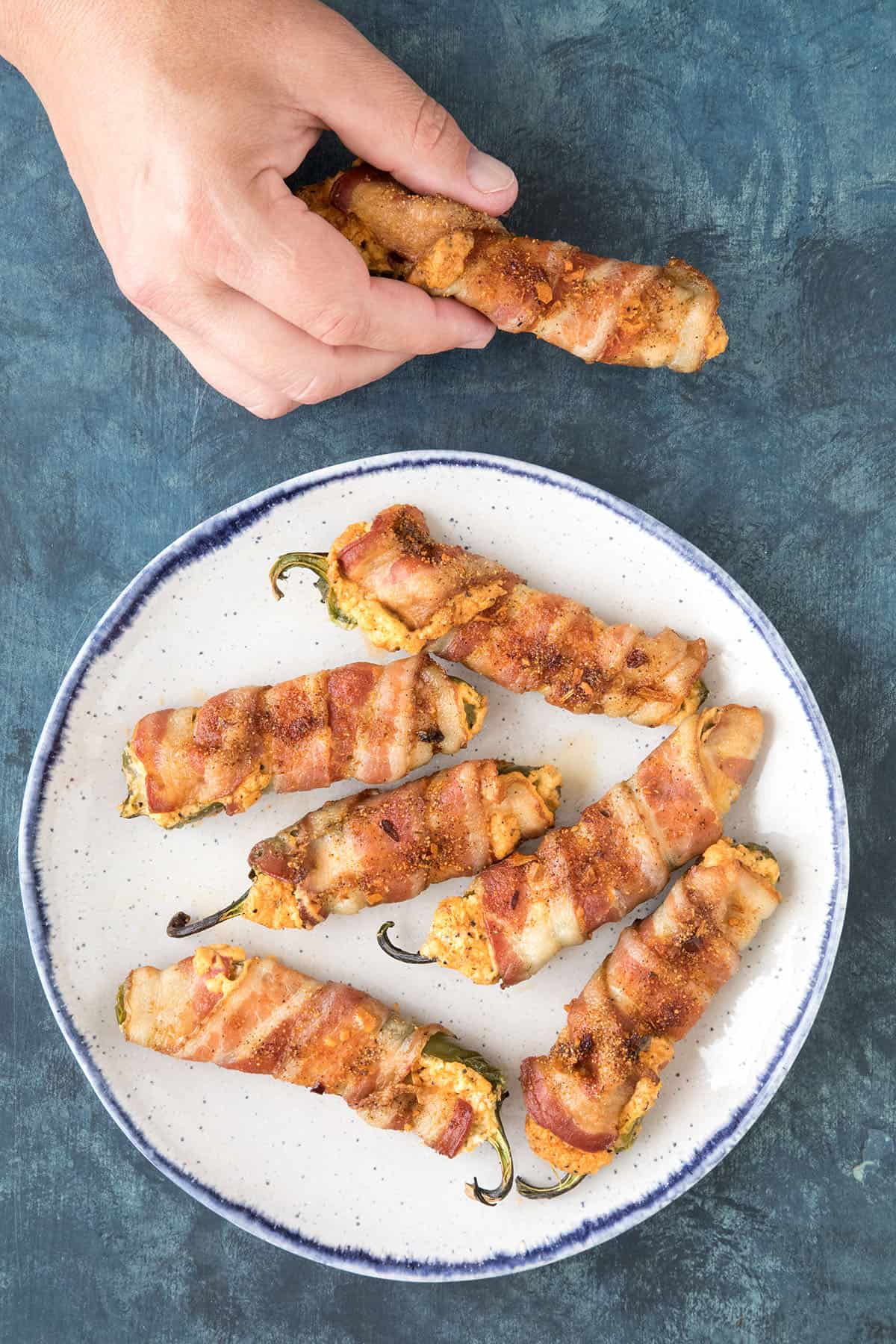 Tips on Wrapping Poppers with Bacon

Sometimes the bacon can shrink up and partially fall off of the poppers, or they can get a bit soggy underneath. The key to achieving properly wrapped bacon is to use a large enough piece of bacon that wraps around properly. Note that the bacon will shrink up during cooking, so ensure a good wrap.

Second, make sure you cook them long enough. If the bacon isn’t very crispy, keep cooking until it is. You can also hit them in the broiler a few minutes to get that crispy bacon, or sear them on the grill to achieve the same effect.

If you fear the bacon will shrink up too much, use toothpicks to hold them in place. I’ve found, though, that the bacon holds together very nicely, but use your best judgement.

As mentioned, most of the jalapeno heat is in the cored out whitish innards, so if you’d like spicier jalapeño poppers, chop it up and mix it in with your cheese mixture.

Also, you can conserve on bacon by slicing them in half and then wrapping the stuffed jalapenos. They’re still super tasty this way, though I prefer a lot of bacon in each bite. The choice is yours.

Thin cut bacon is best for this recipe. Thicker cut bacon may not crisp up enough to your preference.

Here is an extra tip on a question I get sometimes…

How to Slice the Jalapenos

When making jalapeno poppers boat style, it is best to hold the peppers by the stem and slice with knife from the tip to the stem, straight in the middle. This will get you two even pieces of jalapeno. Then, simply scoop out the seeds and ribs (the whitish innards) to make room for your cheese filling. 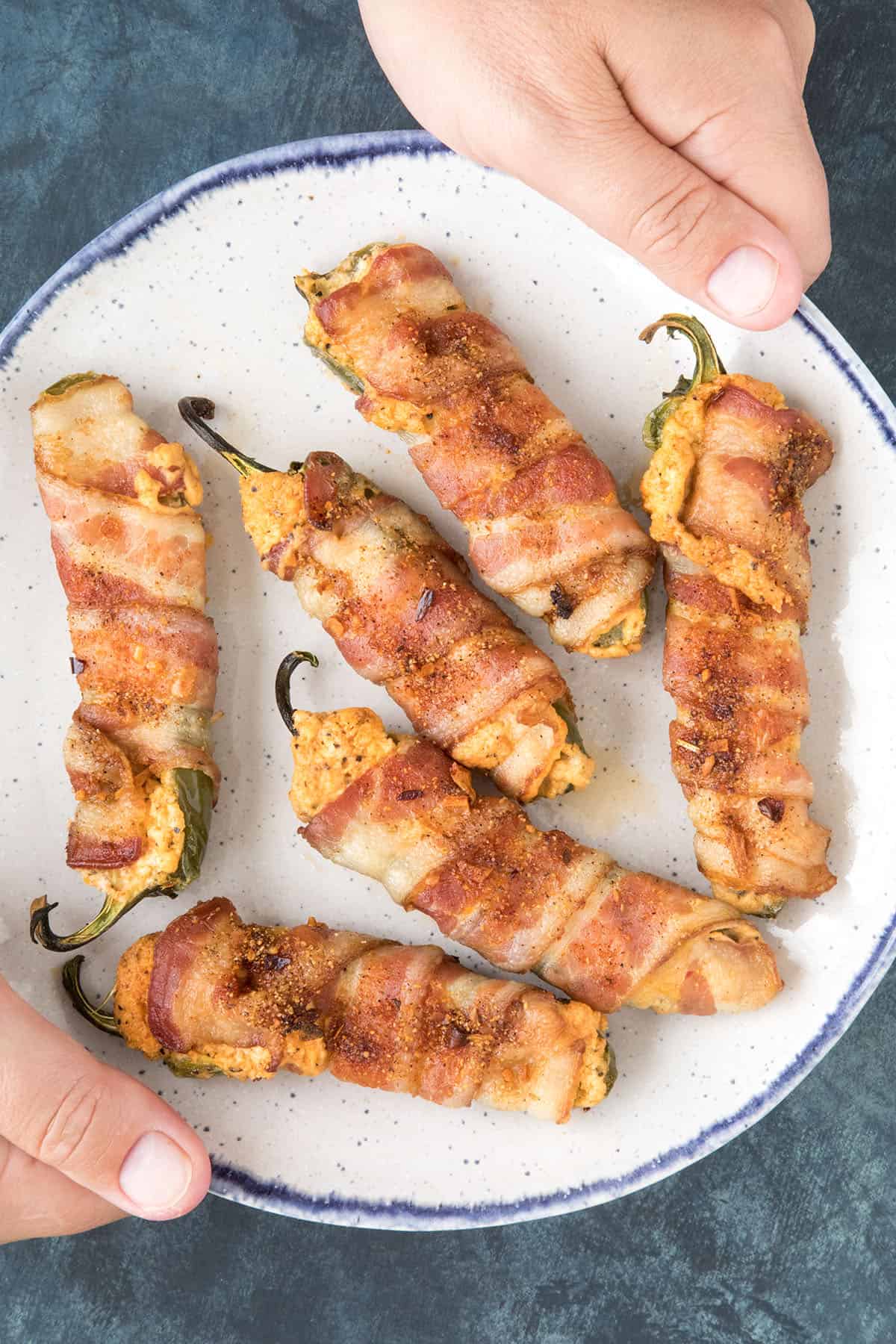 Stuffing Options for Your Party Poppers

The beauty of bacon wrapped jalapeno poppers is – you can stuff them with pretty much anything you want! YES! I chose a mixture of seasoned cream cheese and cheddar cheese, but you can try other ingredients, such as cooked chorizo, shredded chicken, pulled pork, and even chopped shrimp.

Try them with other cheeses, like pepper jack cheese or a good sharp cheddar.

So many ideas! I love it. 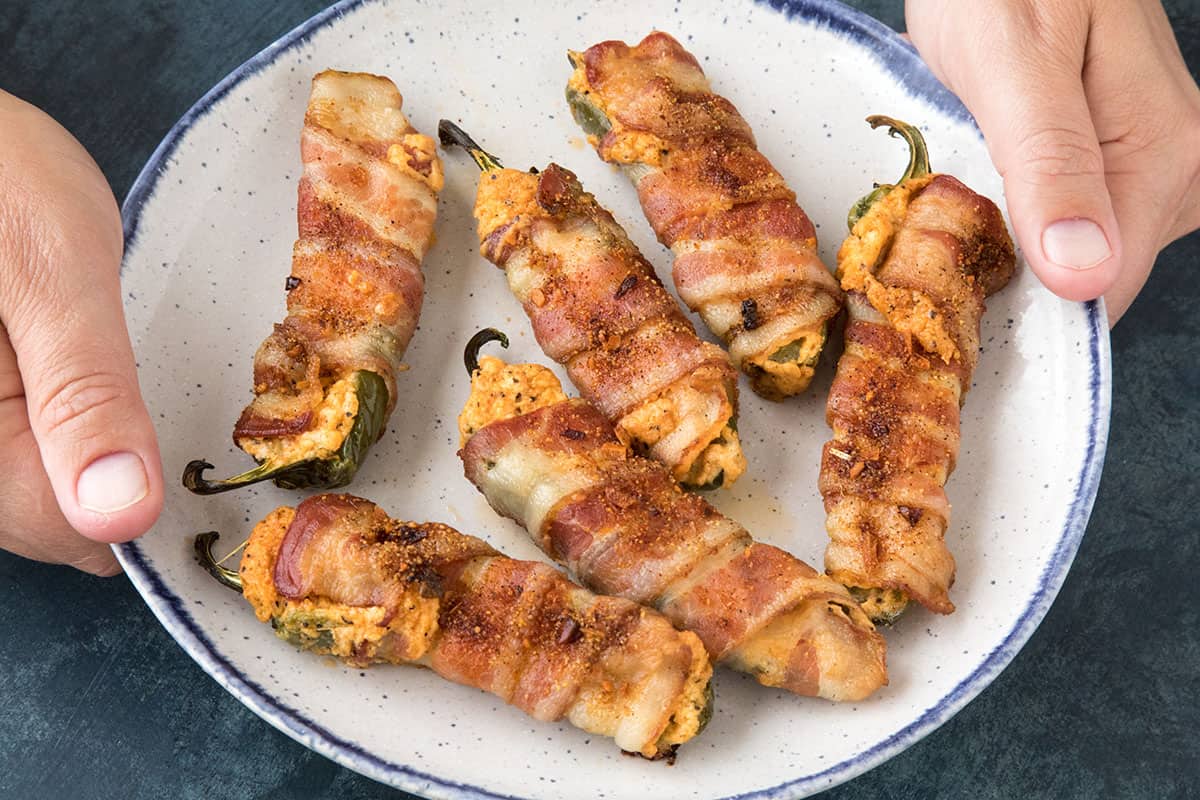