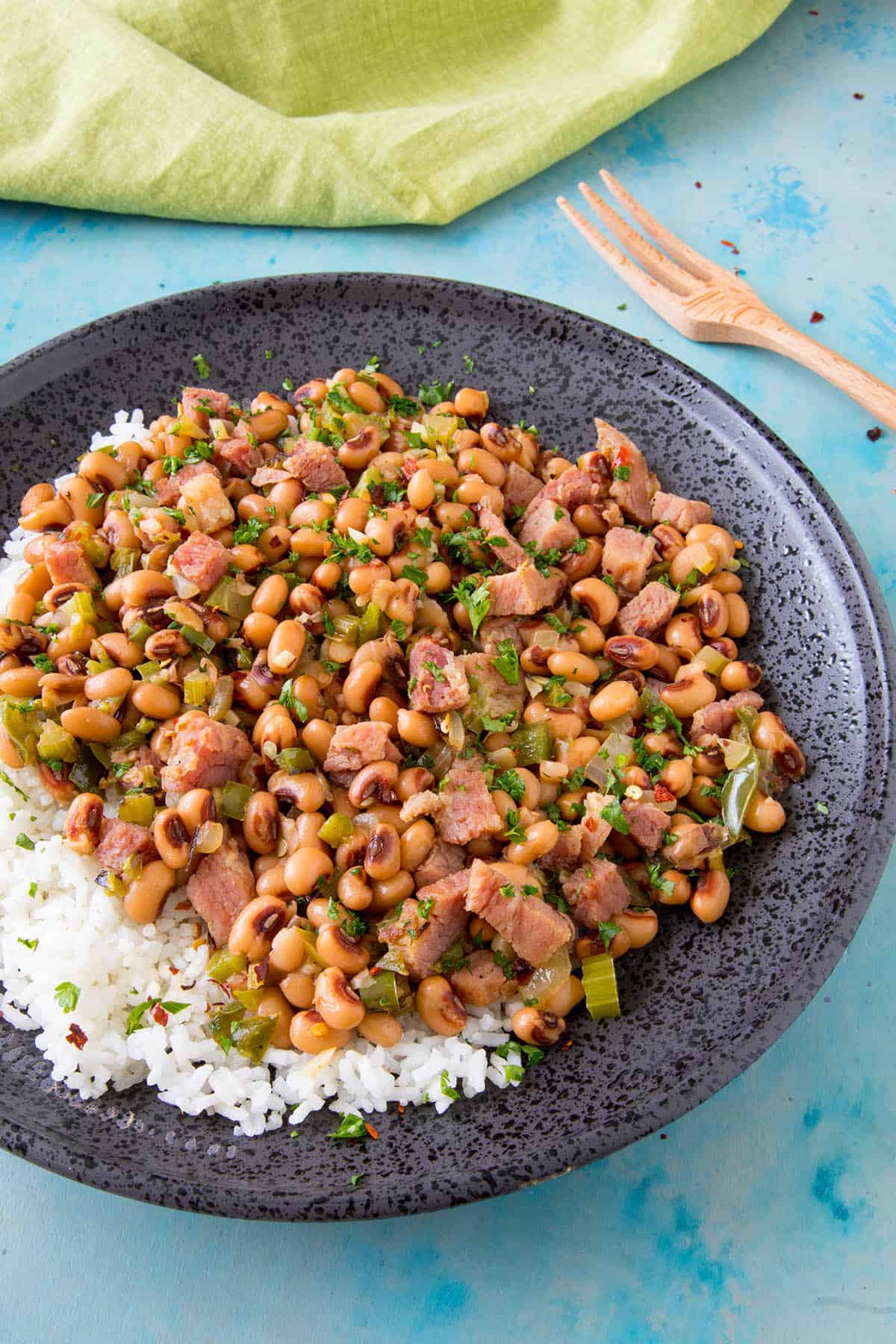 This Hoppin’ John recipe is a classic Southern dish of black-eyed peas cooked low and slow, traditionally with rice, flavored with smoked pork and loads of seasonings. It’s an incredible dish you need to try.

Beans are on the menu today, my friends, but not just any old beans. We’re cooking with black-eyed peas and we’re making a classic Southern dish that is usually served as a side dish, only it’s so good, you might want to serve it as the main course.

The dish is called “Hoppin’ John”, known more locally as Carolina Peas and Rice, and I’m sure you’re going to love it. It is often served to celebrate the New Year, offering up good fortune to all. It’s good luck to serve black eyed peas on new years day, but I love them anytime.

I’ve seen a number of versions of this recipe, and sampled a few in my journeys to the Southern U.S., but Hoppin’ John essentially breaks down to the following ingredients – Black-eyed peas, rice and pork.

Traditionally, the dish is made by slowly cooking the rice and beans together with broth and the pork for flavoring, but you’ll often see newer versions of the dish made by cooking the beans alone and serving them over the rice. It’s really up to you how you want to prepare it, though prepare yourself for the purists to argue that you can’t cook the rice and beans separately.

I’ve made this both ways and I love them both, so however you want to do it! You do YOU! That is ALWAYS the best approach. 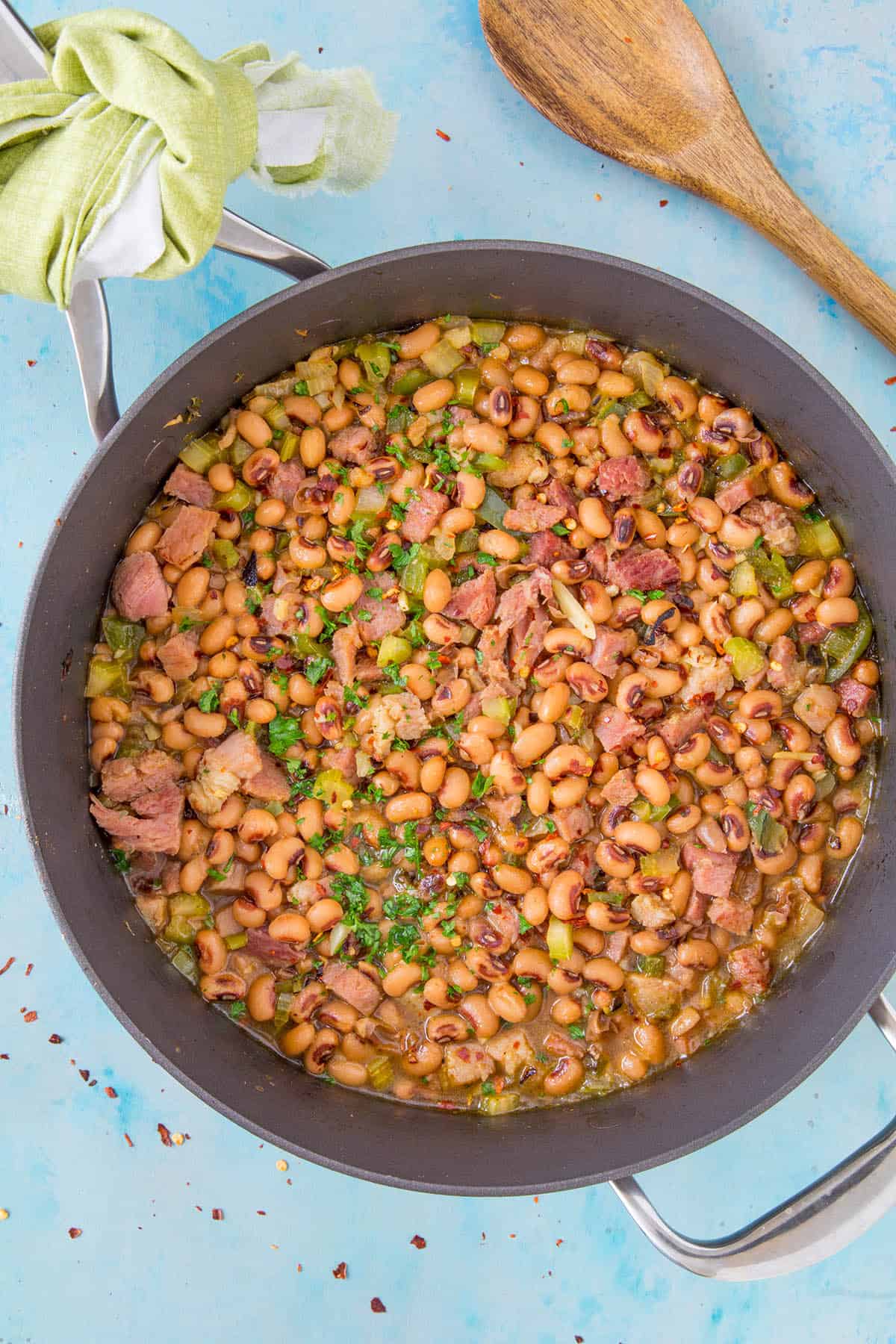 What are Black-Eyed Peas?

Black-eyed peas are also known as goat peas, which is a subspecies of the cowpea. They are not peas, however, but beans, pale brown in color with a distinctive black spot. Other cowpeas include field peas, crowder peas, and cream peas.

They soften up nicely and become creamy when cooked, and they’re very flavorful. Definitely one of my favorite beans to cook with.

I have seen and enjoyed Hoppin’ John made with different types of pork, from bacon to pork belly, smoked ham, ham hocks, country sausage and even version with other meats, like smoked turkey and chicken.

Pork is traditional, and you’ll see variations from chef to chef, from region to region, so plan accordingly. I used smoked ham in my recipe, with ham that I smoked at home in my smoker, but consider adding sliced bacon, pork belly, and/or andouille sausage.

So delicious either way! 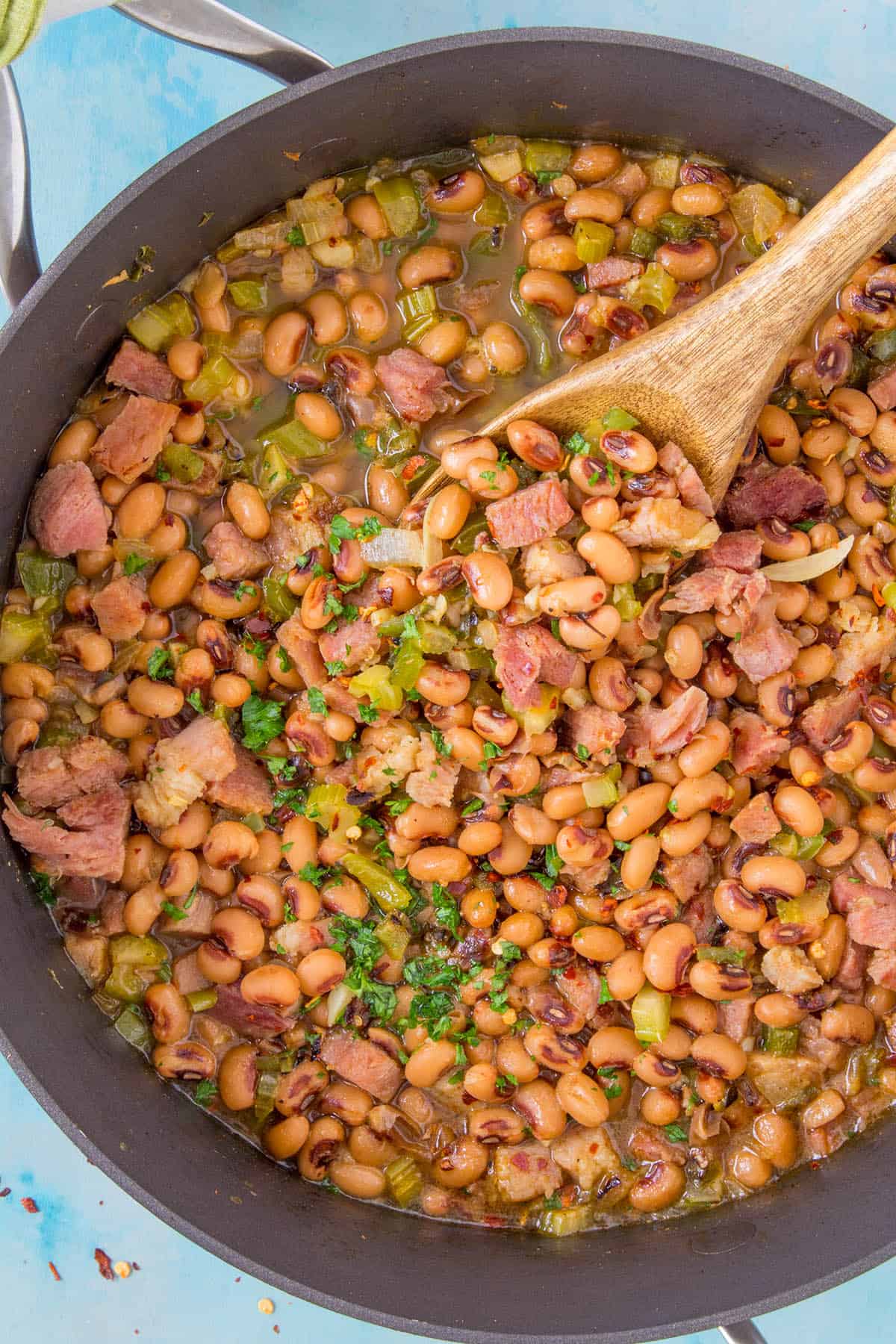 Why is it Called Hoppin’ John?

There is no clear reason how the name “Hoppin’ John” came about, aside from anecdotes. One story is that an old man named Hoppin’ John was well known for selling peas and rice in Charleston, so buyers began to refer to his dish that way.

Historians mostly believe the name is a variation of “pois pigeons”, which is French for “dried peas”. Makes sense to me!

Let’s talk about how we make this dish, shall we?

How to Make Hoppin’ John – The Recipe Method

First, heat a large pot to medium heat and add in a bit of olive oil.

Cook down the onions, peppers and celery until they are nicely softened.

Add in a bit of garlic and smoked ham (or whatever pork you’re using), and heat them through.

Add in your Cajun seasonings (check out my Cajun Seasoning Blend) along with your pre-soaked black eyed peas and chicken broth. Bring to a boil, then reduce heat.

Simmer the beans for 1 hour, stirring occasionally, or until the beans are nicely softened, but not mushy. We don’t want no mushy beans!

Serve it over rice.

As mentioned, there are many variations of this dish, but one big point of contention is this – do you cook the rice with the beans? Or cook it separately?

I serve the beans over rice, sometimes as the meal, though you can cook the rice into the pot the last half hour or so.

But Hoppin’ John is great both ways! 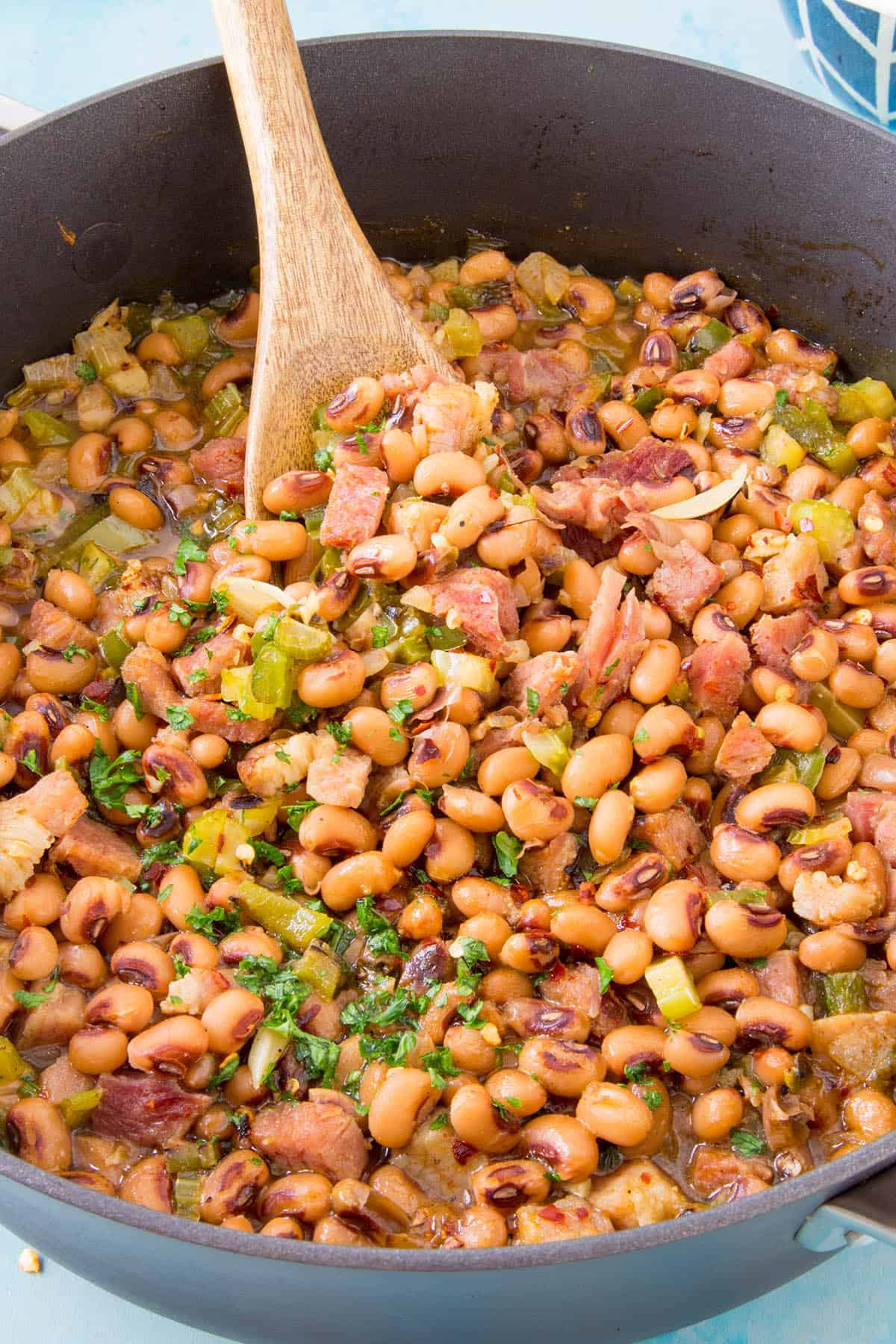 Should I Soak the Beans Before Cooking?

I always thought this was a no-brainer answer, but apparently it is not. I have always soaked my beans to soften them up before cooking. However, some people swear by cooking straight from the dried beans.

Soaking can reduce cooking time and softening of the beans. However, if you drain the beans, you may be losing some of the nutrients from the beans that have leached into the water.

Soaking does help to soften the tough bean skins. I like to add about 3 tablespoons of salt to the water for more of a brine when soaking, which helps soften the beans and adds a bit more flavor and creamy bean interiors.

Cooking time for soaked beans is about 1 hour, to soften them up.

How to Soak the Beans

First, sort and rinse the beans. Add the rinsed beans to a pot with 6 cups of water. Leave it overnight, 6-8 hours for a long soak.

For a quick soak method, add the rinsed beans to a pot with 6 cups of water, then bring to a quick boil. Boil for 2 minutes, then remove from heat.

Cover and soak for 1 hour. Be careful not to oversoak the beans, or they can split.

That’s it, my friends! I hope you enjoy your Hoppin’ John!

Try Some of These Other Popular Southern Recipes 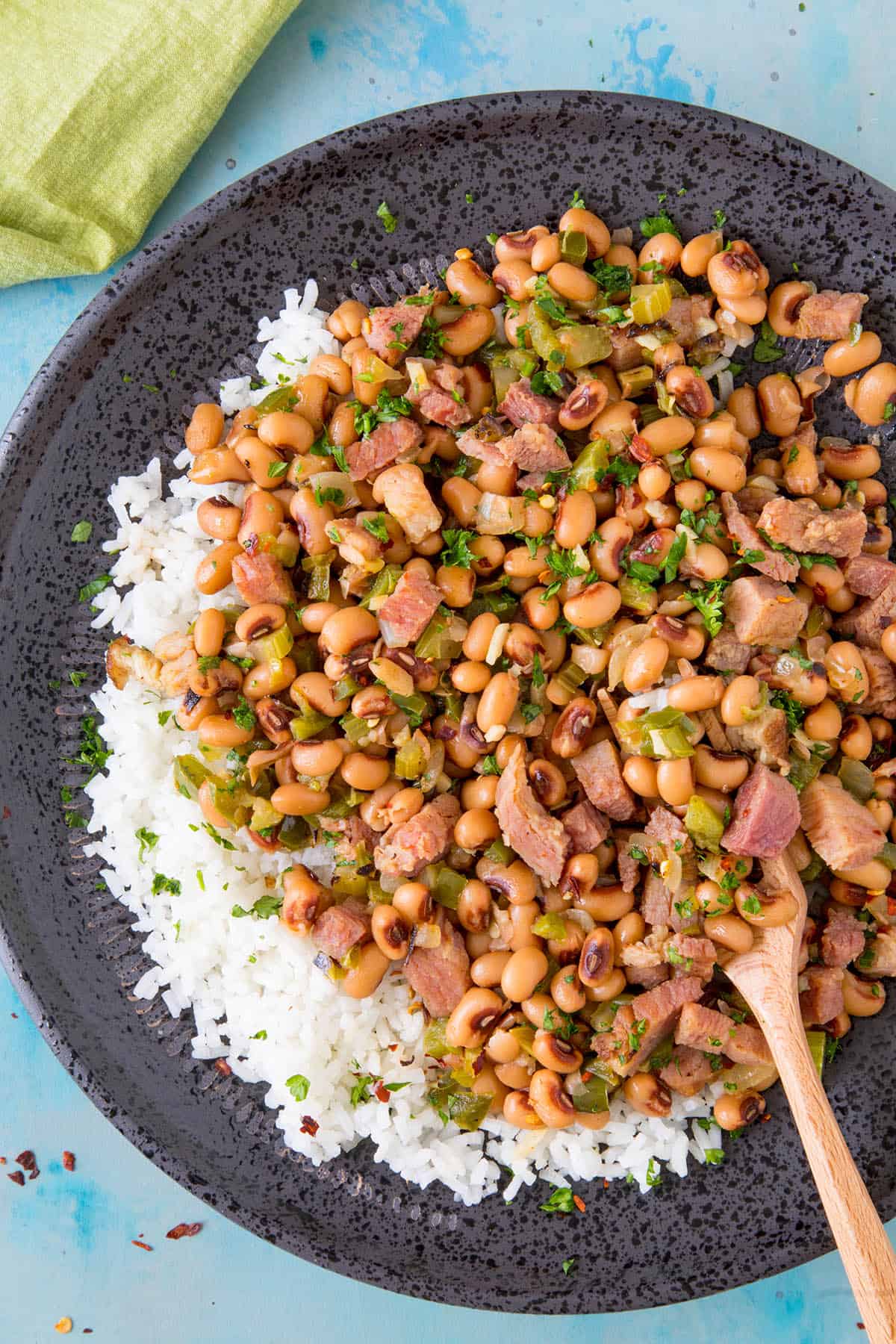 Serves 12 as a side dish. Heat Factor: Mild Many factors may affect the cooking time of the black-eyed peas, including the age of the beans, where they were grown, even the water you are using. They will usually soften in about an hour, but time could run from 30-120 minutes, so be sure to test as you go along. Calories calculated without the rice. 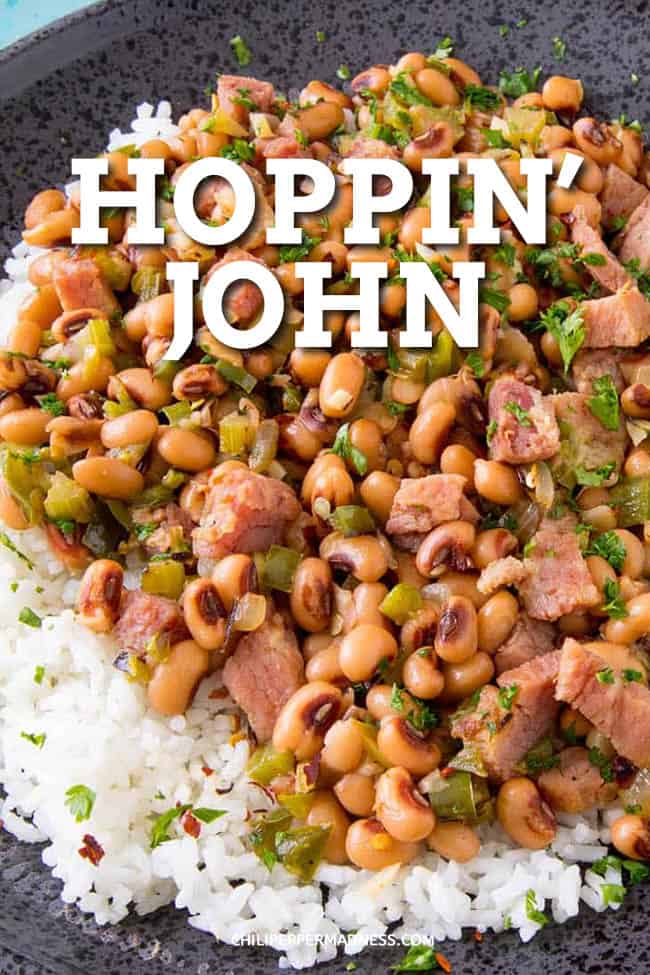