Habanero Pepper – All About Them 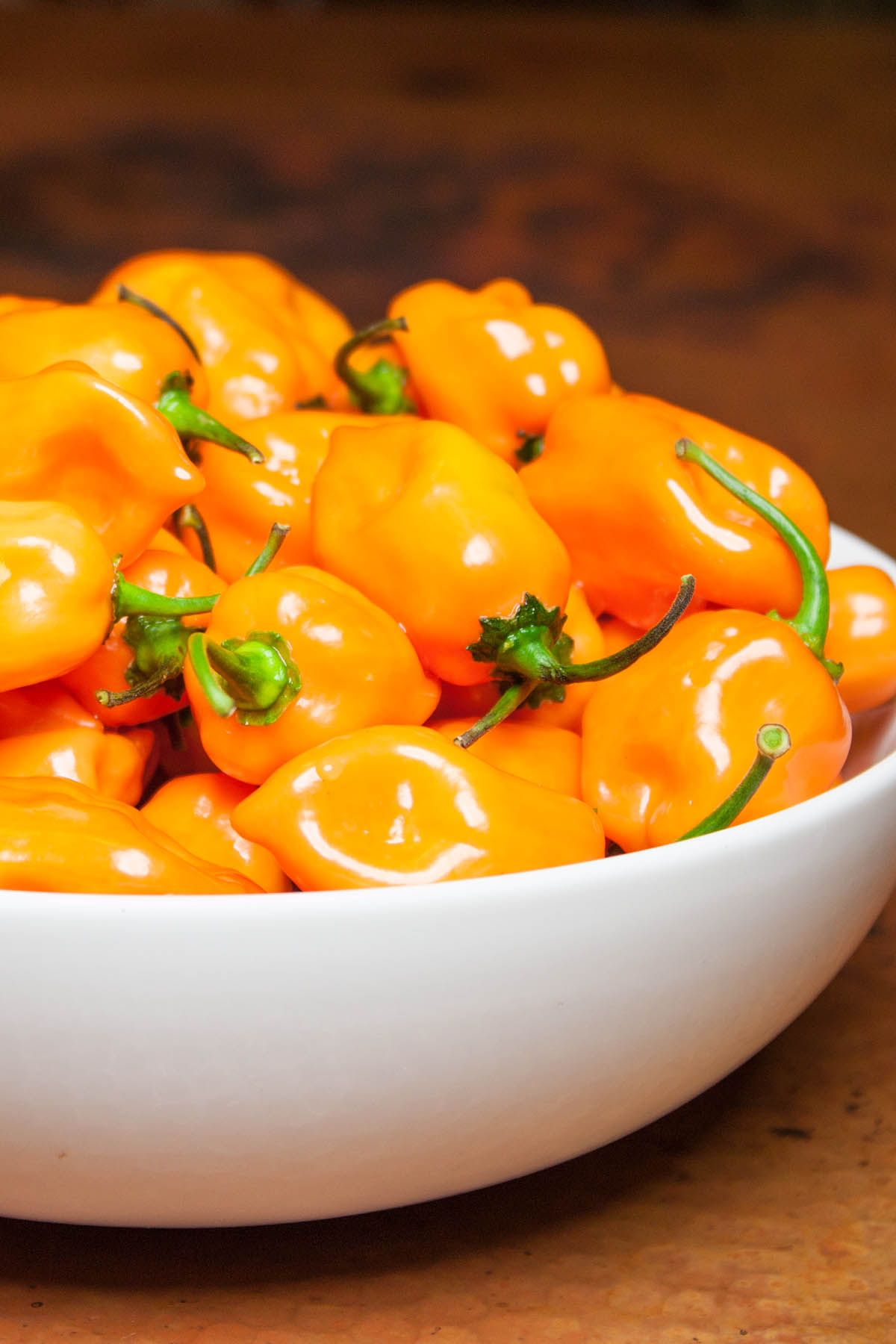 The habanero pepper is named after the Cuban city of La Habana and measures between 100,000 – 350,000 Scoville Heat Units. Learn more about the habanero pepper from Chili Pepper Madness, including the history, growing and cooking with them.

About the Habanero Pepper – History

The habanero is named after the Cuban city of La Habana, known in the U.S. as Havana, because it used to feature in heavy trading there. It is related to the Scotch bonnet pepper; they have somewhat different pod types but are varieties of the same species and have similar heat levels.

It grows mainly on the Yucatan Peninsula in Mexico, where it is now thought to have originated, though it also grows in other hot climates including in Belize, in Costa Rica, in parts of the United States, and in Panama where it is known as the aji chombo.

Once the Spanish had discovered it, they spread it far and wide around the world, so much so that taxonomists in the 18th century thought it originated in China and therefore named it “Capsicum chinense” or the “Chinese pepper.” If anything, this pepper’s popularity is even more on the rise today.

With its terrific heat, its hint-of-citrus and fruity flavor and its flowery aroma, it has once again become a well-loved ingredient in many preparations including hot sauces and other spicy foods.

In Mexico, it is sometimes soaked in tequila or mezcal bottles for days or even weeks in order to make drinks even more fiery. 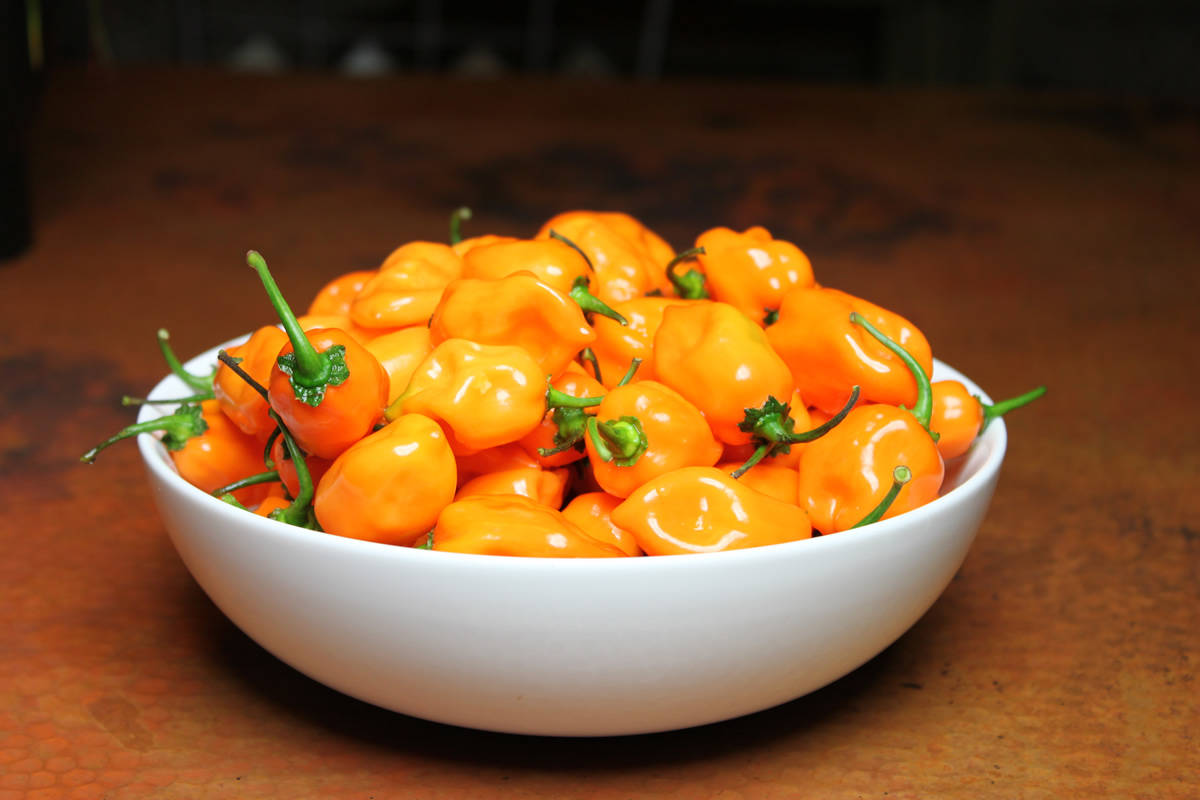 On the Origins of the Habanero

Early versions of the habanero pepper were much different than the domesticated version you see today. The habanero originally started as a small wild chile pequin. After thousands of years of breeding and growing, the wild pepper has evolved into the popular hot pepper we know.

This amazing pepper’s origins go back 8,500 years to the South American rain forests of Brazil, where the Mayans brought them up through Central American to Mexico. They are wildly popular in Mexico, now deeply ingrained in their culture.

Before maturity the pepper is green, but as it ages its coloring ranges from yellow-orange to orange to bright red, depending upon when its harvesting occurs, and it can even appear pink or dark brown.

Its size ranges from 1 to 2 1/2 inches in length and from 1 to 2 inches in diameter, and its shape, like that of the Scotch bonnet pepper, can be compared to that of a Scottish Tam o’ Shanter hat.

Both types of pepper also typically have flesh that is thin and waxy.

How Hot Are Habanero Peppers?

Habaneros are one of the hottest chili peppers around in terms of popularity AND of Scoville units! While many range from a still-eye-watering 200,000 to 300,000 Scovilles, some have ranged from a scorching 450,000 to a blistering 600,000 Scovilles, thus knocking the socks off of a common jalapeño pepper that usually ranks from 2,500 to 8,000 Scovilles.

Also compare it to the extremely fiery ghost pepper, one of the super hots, which is just about 1 Million Scovilles. It’s not that far below.

To test the heat of your pepper, you can try taking a sliver and tasting it, and even chewing it up if you feel the initial taste is safe enough. Always remember, however, to handle these peppers with care; some experts even say that wearing gloves alone is not enough but that the gloves and cutting board should be cleaned with bleach and/or detergent after cutting the peppers to avoid spreading their capsaicin.

To decrease the heat before adding it to your dishes, you can remove the inner white placental tissue.

How Much Hotter is a Habanero than a Jalapeno?

There are many different types of habaneros that have been created through selective breeding. They come in several different shapes and colors, from vibrant red to orange, to chocolate brown and even white.

They are cultivated and crossed for these particular characteristics, particularly for variations in heat. Here are some of those variations:

Are Habaneros and Scotch Bonnet Peppers the Same?

While habaneros and Scotch Bonnet peppers are similar in heat levels, flavor and appearance, the two peppers are not the same, but are two different peppers.

Can I Eat a Green Habanero Pepper?

Yes, green habaneros are edible, though their flavor is not fully developed. The flavor of green habaneros is more vegetal and may lend itself to certain types of sauces you may want to make, but they won’t have that fruitiness and citrus flavor that develops with mature habaneros.

Why Are Habaneros So Popular?

They’re also very easy to grow and the plants are extremely productive, making them widely available at very reasonable costs.

Habaneros can Burn Your Skin

The chemical that makes peppers hot, capsaicin, is an oil and will stick to your skin. It is best to practice food safety by wearing gloves when working with these peppers, especially if your skin is sensitive. Avoid rubbing your eyes or other sensitive areas of your body after handing habaneros or any other hot peppers. If you experience any burning sensations, either on your skin or after eating them, see this page for How to Stop the Chili Pepper Burn.

I greatly enjoy cooking with habanero peppers and have many, many recipes using them. Here are a few recipes to help get you started on your spicy food journey.

Where Can I Buy Habanero Seeds?

Buy Habanero Seeds here at Amazon (affiliate link, my friends). You can also check out my chili pepper seeds resources page. Growing habanero peppers is very easy, and the plants are very productive. Grow a single plant and you’ll have many, many peppers to cook with.

Got any questions? Contact me any time. I’m happy to help you find the information you need.

This post was updated on 9/4/19 to include new information and photo. It was originally published on 10/7/13.