Pepperoncini Peppers – All About Them – Scoville & More 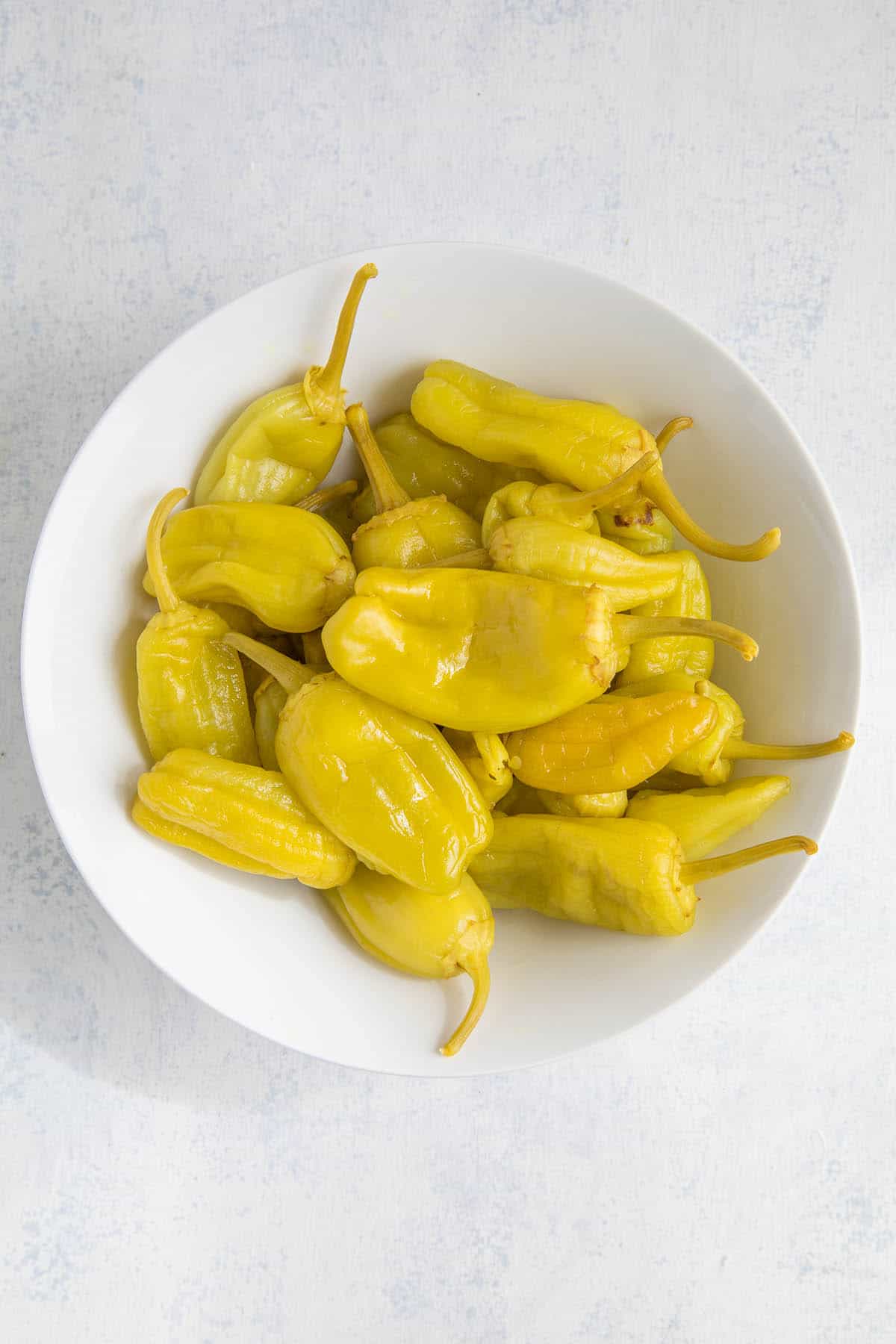 Pepperoncini peppers originate in Italy and Greece, though their popularity has spread throughout the world. They are very popular in the United States, where they are also known as Tuscan Peppers, sweet Italian peppers, or golden Greek peppers.

The peppers are sweet and mild in flavor, not very hot, although they can vary and be found up to a medium heat level.

You’ve most likely encountered a pickled pepperoncini in an Italian antipaso platter, Italian salad, or served up on a pizza or sub sandwich somewhere.

They are most often found pickled. You can purchase the peppers in jars, pickled, where they last quite some time, offering up their sweetened, tangy flavor. 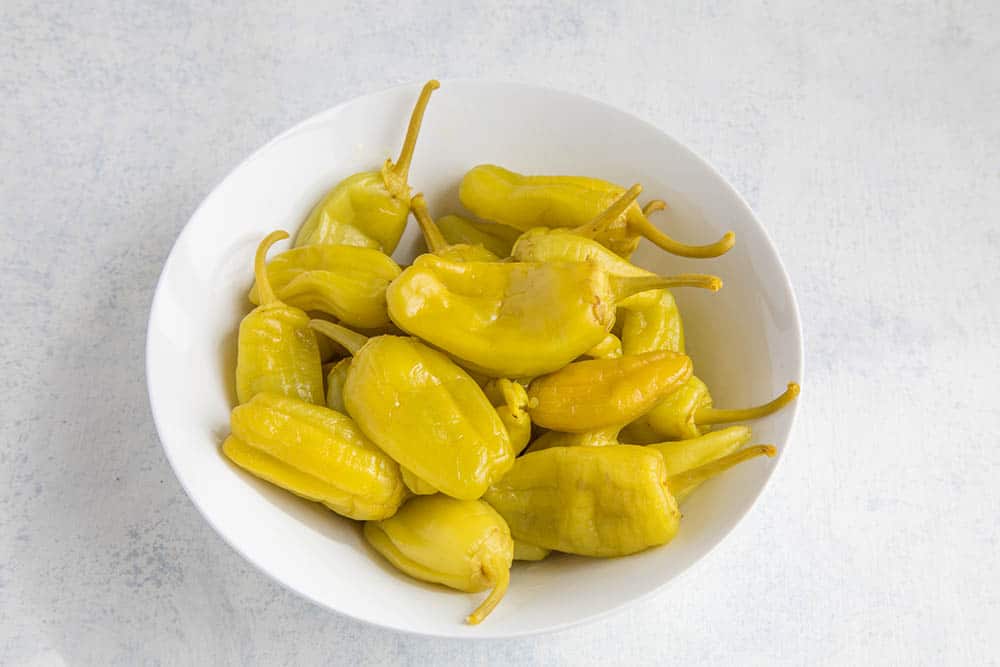 A Description of Pepperoncini Peppers

Pepperoncinis are thin walled peppers, 2 to 3 inches in length, have wrinkled skin and are usually sold pickled. The skin is a light yellow-green but will turn red as they mature, so you’ll find both green and red pepperoncinis in stores, although green is most common.

Pickled are also most common, although you can use fresh peppers in recipes, such as pizza sauce.

There are two primary types of pepperoncini peppers – Greek and Italian. The Greek variety are shorter,  somewhat sweeter and less bitter than the Italian variety, which grow a bit longer. They do, however, offer up a similar mild heat.

These peppers are often confused for pickled Banana Peppers, but they are not the same. 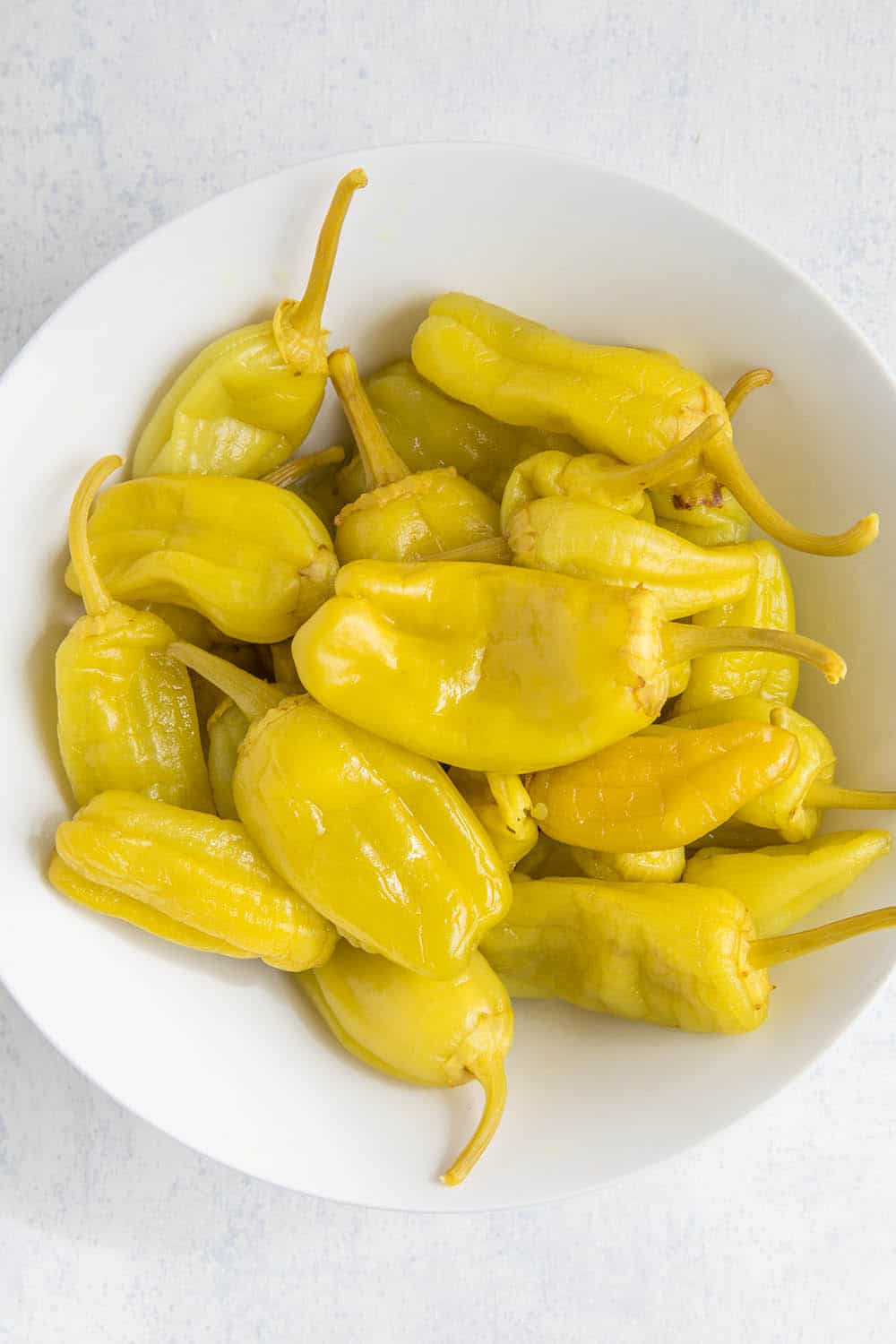 Where Do Pepperoncinis Come From?

The Pepperoncini originates from Italy and Greece, though it is commonly known as an Italian chili pepper. As it is a common pepper in those regions and beyond, it is known by many names. We call it the pepperoncini in the United States, though name variations are “peperoncini” (one less p in the spelling) or “peperone” by the Italians, which is a more generic name for a general pepper.

It also known as Friggitello in Italy. In the U.S., we often refer to them as the Tuscan Pepper, sweet Italian pepper, or golden Greek pepper. As you can see, it is quite a popular pepper.

How Do You Pronounce Pepperoncini?

How Hot are Pepperoncini Peppers?

To put it another way, jalapeno peppers are about 50 times hotter than pepperoncini peppers.

Check out information about the Scoville Scale here. 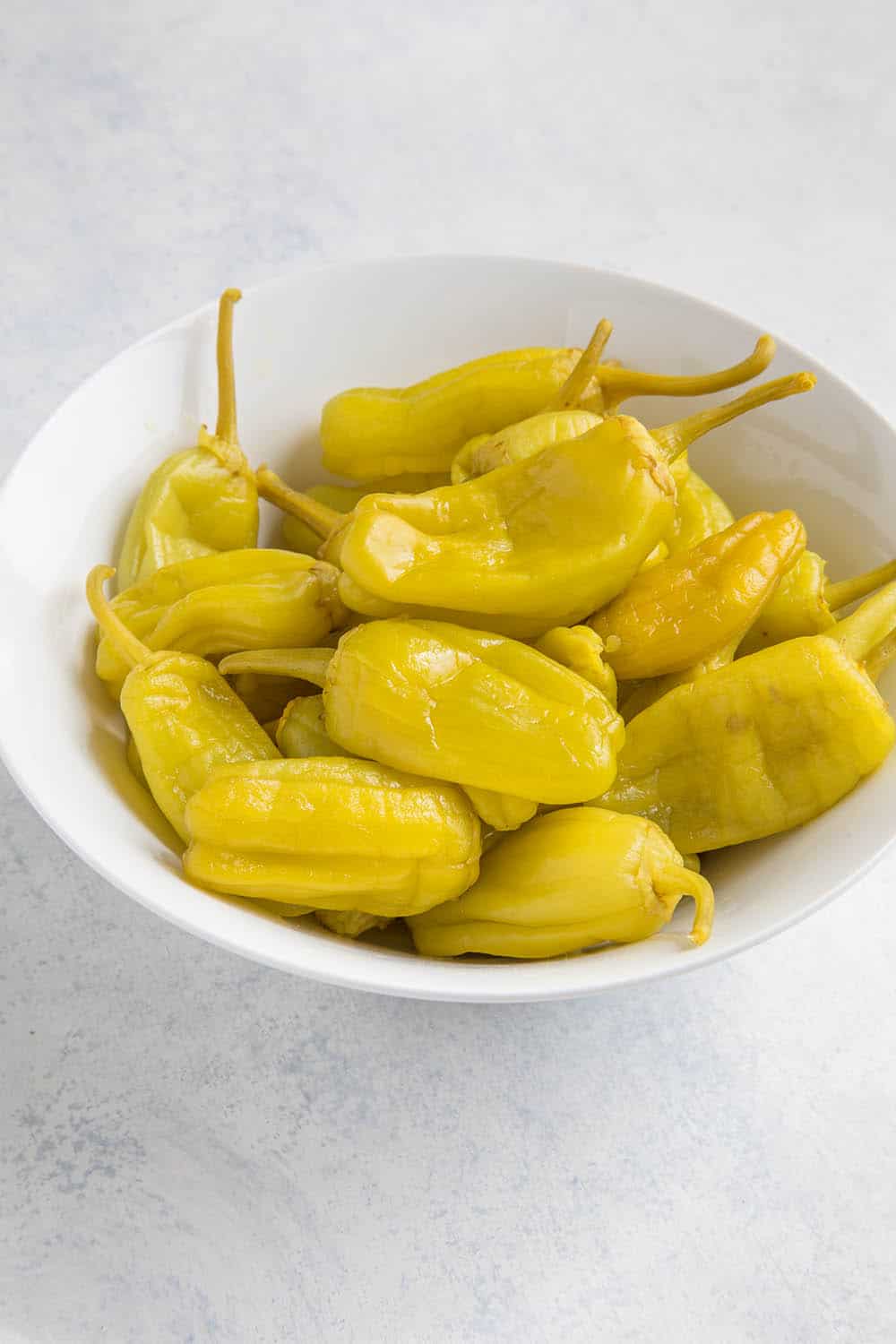 Pepperoncini peppers can be used in a variety of meals – anywhere from soups and sauces and salsas to simple garnishes, sandwiches, salads, and more. You can eat the peppers raw, though the pickled variety is by far the most popular and used.

It is a wonderful pickling pepper with amazing tastes, used to add some zing to my favorite meals. They are easily enjoyed straight from the jar, offering up their tangy delight with a touch of heat, making for a great low-calorie snack.

Where Can I Buy Them

You can usually find pepperoncinis at your local grocer. They are quite commonly sold. I typically find them with the other pickles and condiments. I don’t often see fresh pepperoncinis sold near me, so your best best for fresh pods is to either grow them or look at a local farmers market.

You can even strike up a relationship with a farmer and ask him or her to grow some for you.

Or you can purchase a jar through Amazon (affiliate link). There are many different brands offered, and some may vary with quality. I’ve tried several brands and enjoyed them all.

I have grown pepperoncinis in my own home garden and find they are easy to grow. The plants are productive and you can either cook with fresh or pickle them yourself.

If you can’t find or grow these chili peppers, consider the Banana Pepper, which has similar size, flavor and heat, or the Hungarian Wax Pepper.

The Banana Pepper has a mild, sweet taste that is very popular on many types of foods. It is commonly eaten on pizza, in Greek salads, on sandwiches, or stuffed with meat and/or cheese. They also add a bit of sweetness to salsa and an interesting flavor, while other peppers add the heat.

The Hungarian Wax Pepper is hotter, but the sweet, hot flavor of these peppers is very popular in mole sauces, and other traditional Latin dishes, soups and salads. They may be found pickled or sold fresh at stores or markets.

Another option is the pickled sports peppers, but they are quite a bit hotter.

Try some of these recipes that incorporate the tangy pepperoncini. 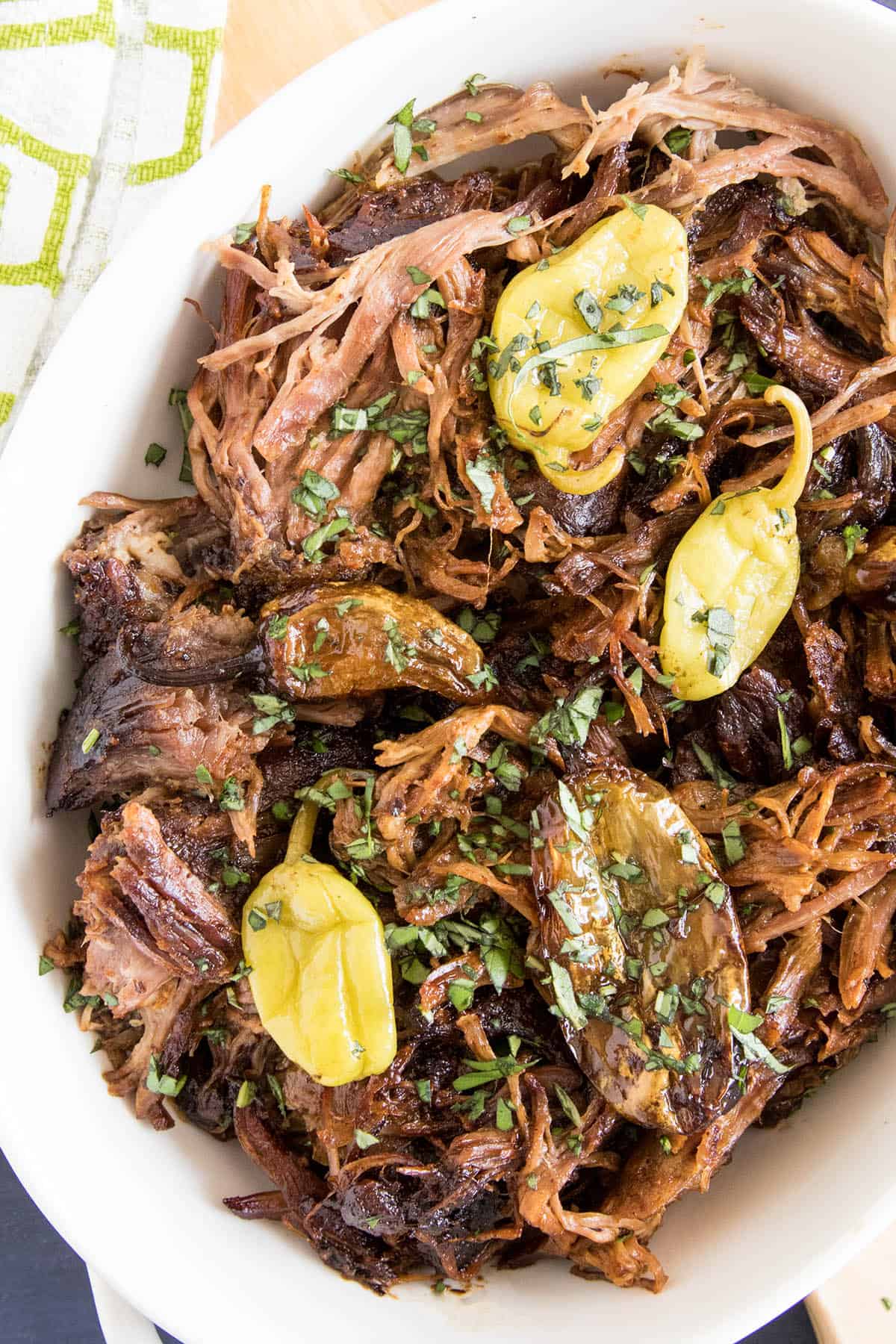