Banana Peppers – All About Them 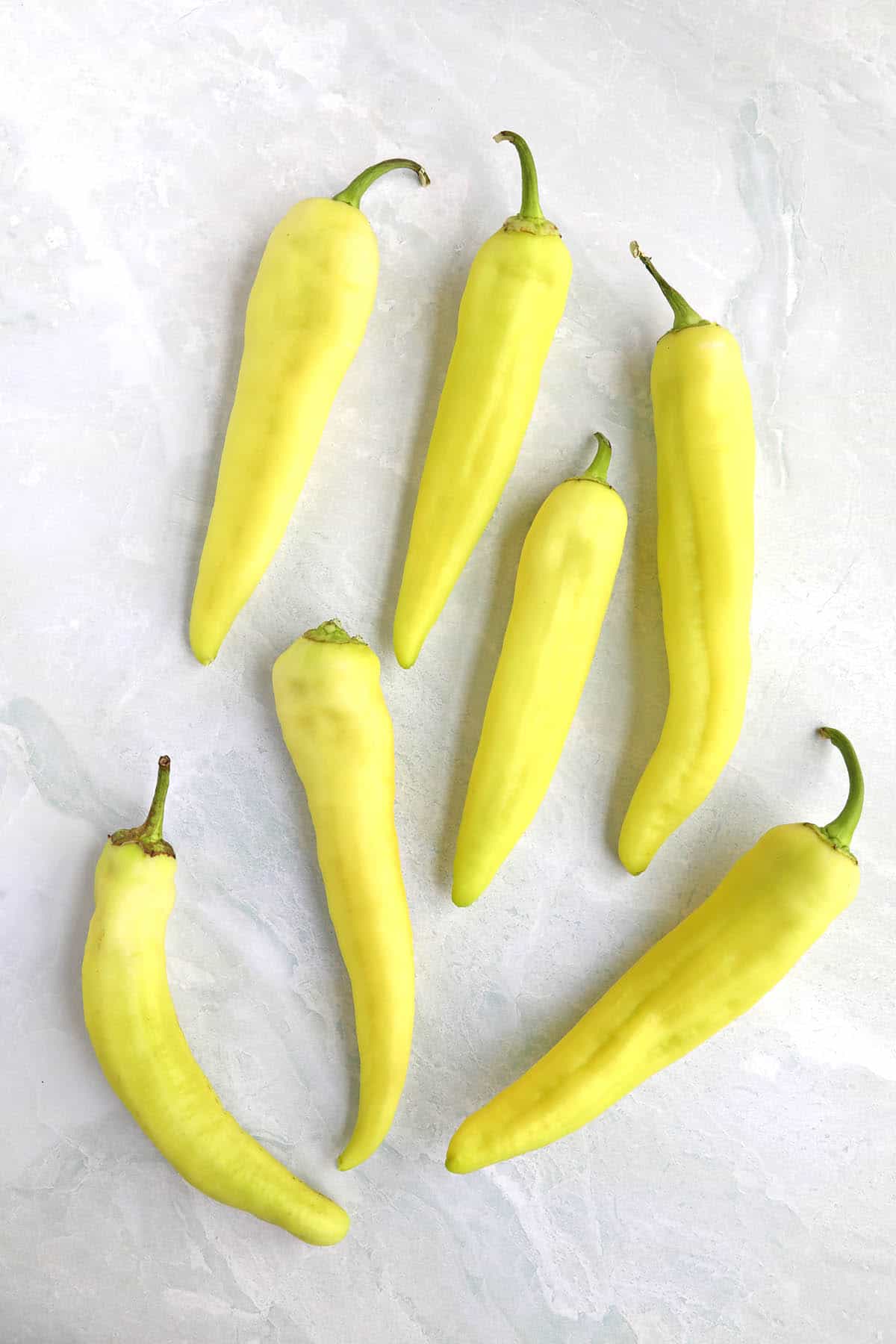 The banana pepper is a mild, medium-sized chili pepper with a tangy, slightly sweet taste. It is typically bright yellow, but matures to green, red, or orange.

What is a Banana Pepper?

The banana pepper is a mild, medium-sized chili pepper with a tangy, slightly sweet taste. It is not considered a hot pepper, offering either no heat or a slight tingle. Compared to the mildest jalapeno pepper, it is 5 times milder, if offering any heat at all.

Also known as the yellow wax pepper or banana chili, the Banana Pepper has a mild, sweet taste that is very popular on many types of foods. It is commonly eaten on pizza, in Greek salads, on sandwiches, or stuffed with meat and/or cheese.

They also add a bit of sweetness to salsa and an interesting flavor, while other peppers add the heat.

They may be pickled or used fresh. Pickled banana peppers are very popular, often confused for pepperoncini peppers. As the name suggests, it is typically a bright yellow or yellow-green, but they may mature to orange or red if left to ripen.

Banana peppers are so named because of their resemblance to actual bananas. Their yellowish color and shape strongly resemble bananas when they are ripe on the plant, so the name is a reference to this similarity.

How Hot is a Banana Pepper?

Banana peppers are not consider hot peppers, giving either no heat at all or a very mild kick at 500 Scoville Heat Units.

Compared to a jalapeno pepper, which measures from 2,500 to 8,000 Scoville Heat Units (SHU), the hottest banana pepper is actually 5 times milder than the mildest jalapeno peppers. That is quite mild.

Other peppers you might be familiar with in this range include the Anaheim Pepper, which measures from 500 to 1,000 Scoville Heat Units, the Cubanelle Pepper, which ranges from 0 to 1,000 SHU, or the pepperoncini, ranging from 100 to 500 SHU.

I’ve grown banana peppers in my garden on and off over the years and consider them fairly easy to grow. The plants enjoy full sun and they grow with fairly thick walled flesh.

That’s a positive when you cook with them like I do, making them ideal for everyday chopping and slicing, but also for stuffing or pickling peppers. You can cut them into pepper rings and pickle them quite easily.

Treat them like other Capsicum annuum varieties, as they require no special treatments or considerations. Plants will typically reach 1 to 2 feet tall and can be grown in many climates, though like most pepper plants, prefer warmer climates.

I’ve grown them in zone 5 without any issue. 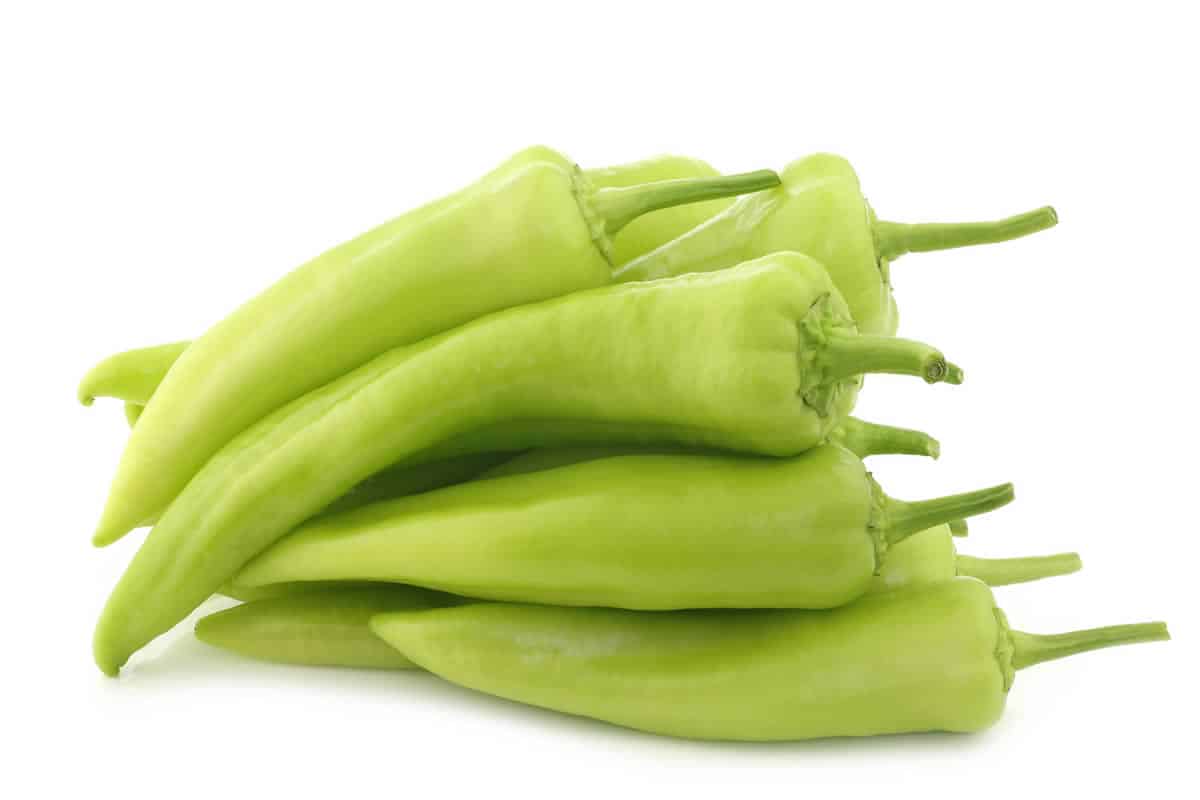 When to Pick Banana Peppers

Pick your banana peppers when they are a vibrant yellow-green in color and the flesh is firm to the touch. Ensure there are no soft spots in or on the pepper skins, and no signs of rotting. You can leave them on the plant to ripen and they will darken to an orange or reddish color, but they are typically picked when yellow or yellow-green.

Peppers picked fresh from the garden will last 2-3 weeks if stored properly. Place them into a plastic bag and keep them in your refrigerator vegetable drawer. The optimal temperature for storing peppers is between 40-45°F. See my page on How to Store Peppers for further information.

What Can I Substitute for Banana Peppers?

Fresh pepperoncinis are more difficult to find, however, so you may need to grow them. A more commonly found pepper to use as a substitute would be a small sweet yellow bell pepper or a mild Italian sweet pepper.

While these peppers look very much alike, they different in certain crucial ways. First, banana peppers measure at 1-500 Scoville Heat Units, where Pepperoncinis measure at 100-500 SHU. A small difference, but notable in the scientific world.

Also, banana peppers are usually smooth, where pepperoncinis can have more wrinkly skin, a physical difference.

In flavor, both peppers are sweet, but pepperoncinis have a reported slight bitterness compared to banana peppers.

Where Can I Find Banana Pepper Seeds?

You can order seeds online, but seeds are easily found in larger retail stores before growing season. You can either purchase them at Amazon (affiliate link) or check out my Chili Pepper Seeds Resources page.

If you have any questions, feel free to email me or leave a comment below. Thank you. — Mike H.

This post was updated on 8/20/19 to include new photos and information. It was originally published on 9/20/13.