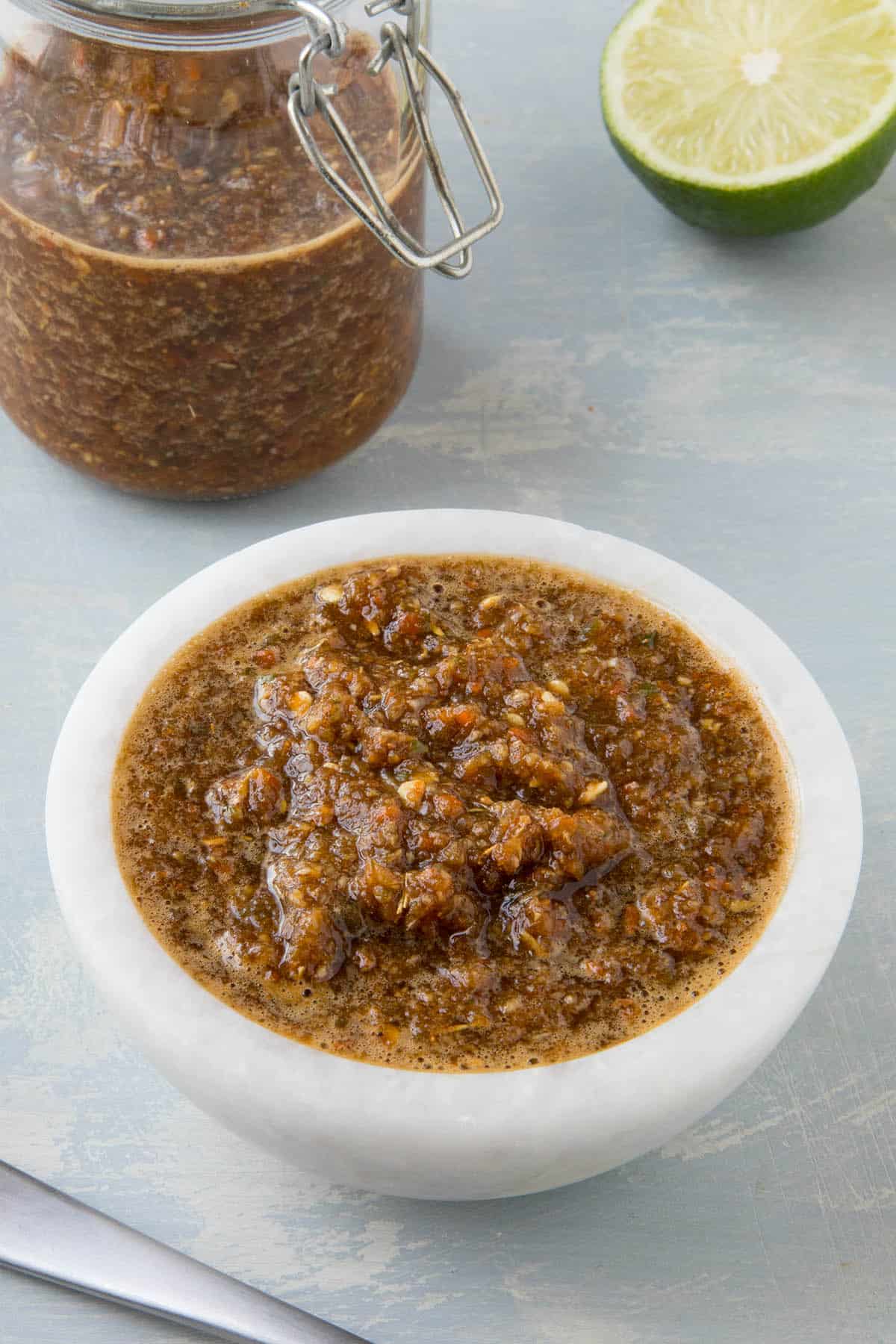 This Jamaican jerk sauce recipe is made with fiery Scotch Bonnets peppers, aromatics and a number of seasonings that make it a must for spicy sauce lovers. Goes great with chicken or seafood.

We’re working our way into some Caribbean cuisine today, my spicy food loving friends. When it comes to spices and big flavors, the Caribbean has you covered, particularly Jamaica.

This part of the world doesn’t shy away from cooking with spicy chili peppers, like the wonderfully fiery Scotch Bonnet pepper that rivals the habanero pepper in both heat and flavor.

With such a lush location and prime growing conditions, the freshest of the fresh ingredients are the norm, the hot peppers are abundant, and the spices are in bloom. I  greatly enjoy visiting the Caribbean just for the food.

Case in point – Jamaican Jerk Sauce. This is a recipe you’ll like to print and keep in your back pocket for those moments when you want that flavor punch of the Caribbean. It’s a warming and rather fiery sauce, though it’s also easy to customize to your own preferred levels. I’ll discuss how you can do that below.

Jerk cooking is native to Jamaica. It is a cooking method where meat is either marinated or dry-rubbed with a mixture of seasonings and ingredients referred to as Jamaican Jerk Spice. Jamaican jerk sauce is integral to authentic Jamaican jerk food.

Chicken or pork are the most common foods cooked this way, though it’s great with seafood as well, just without any low and slow cooking.

Jerk sauce is so important to Jamaican cuisine that the Jamaican government wants to copyright the term “Jamaican Jerk”. They say that “just as Mexico is known for its Tequila, and France for Champagne, Jamaican Jerk is protected internationally from misrepresentation.”

I have my own personalized Jamaican jerk recipe that I’m sharing with you that includes a nice level of that heat and spice, as well as a number of other fresh ingredients and other components that make it one of my favorites. It’s definitely the best.

For now, let’s discuss how we make it, shall we? 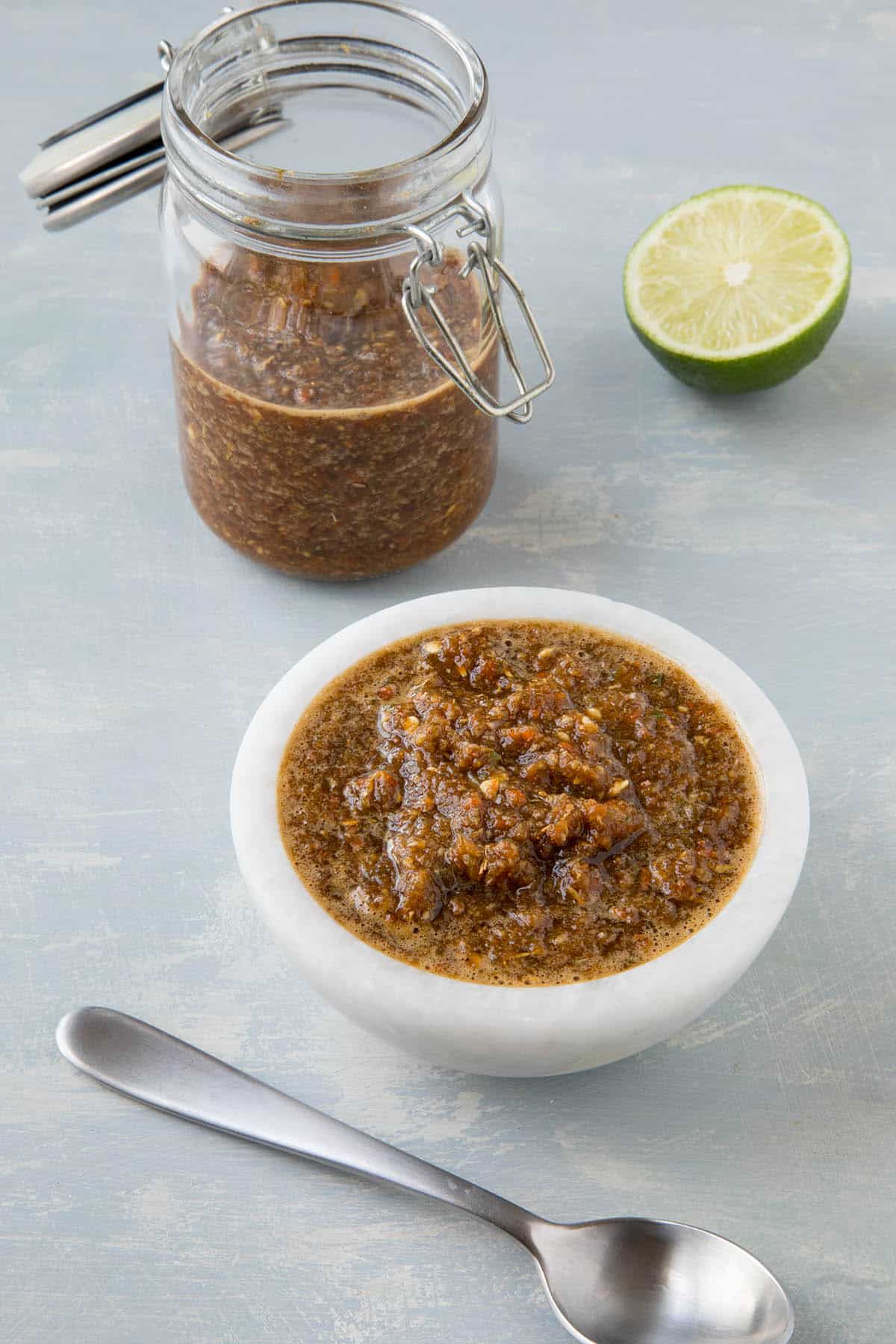 Jamaican jerk sauce consists of a number of ingredients that can vary from cook to cook. These are my preferred ingredients and ratios, with some ranges to consider depending on your personal tastes. 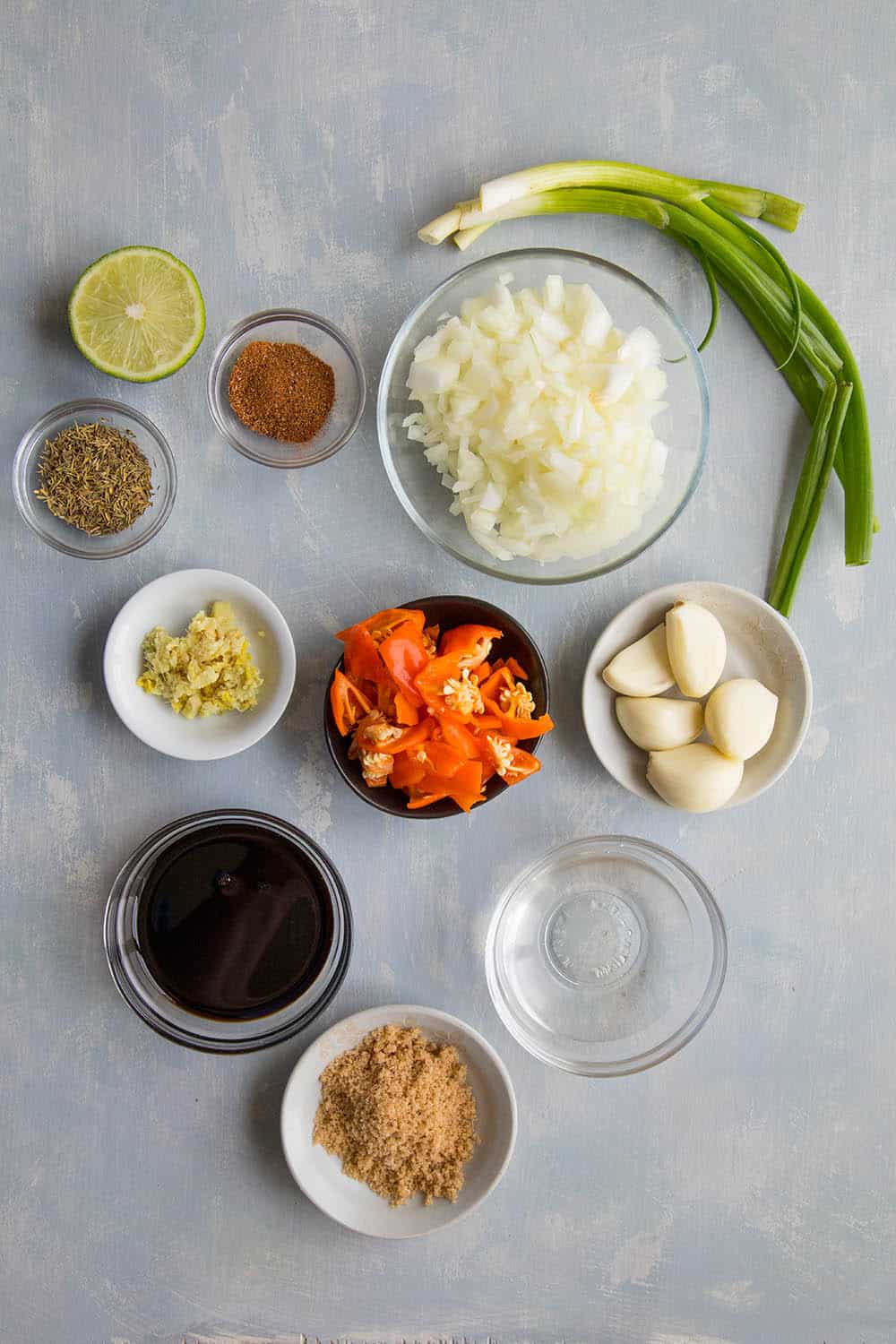 How to make Jamaican Jerk Sauce – the Recipe Method 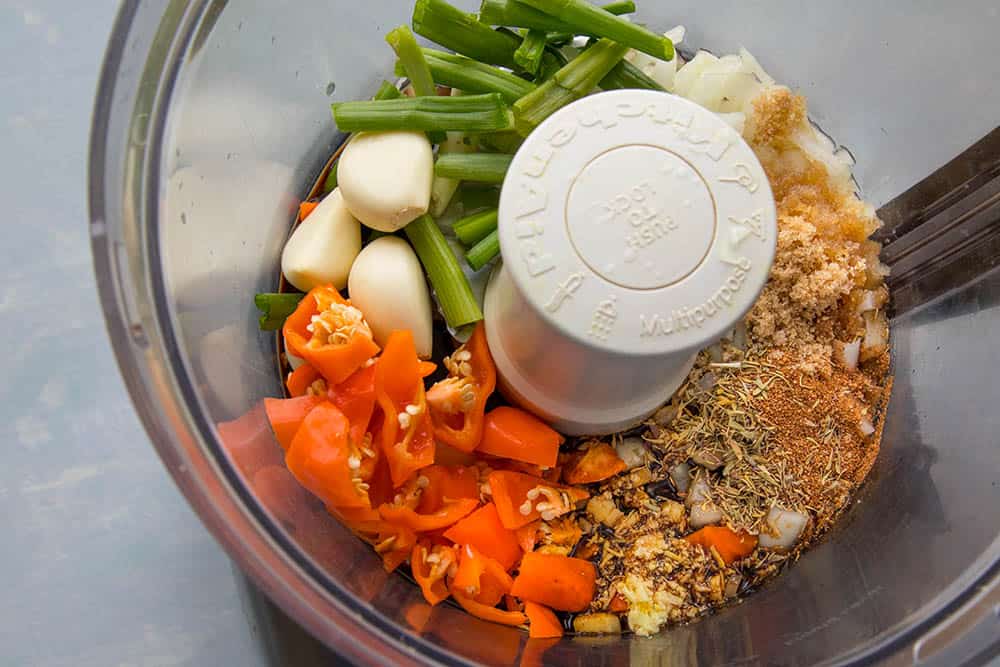 Process until smooth, or until you achieve the consistency you desire. 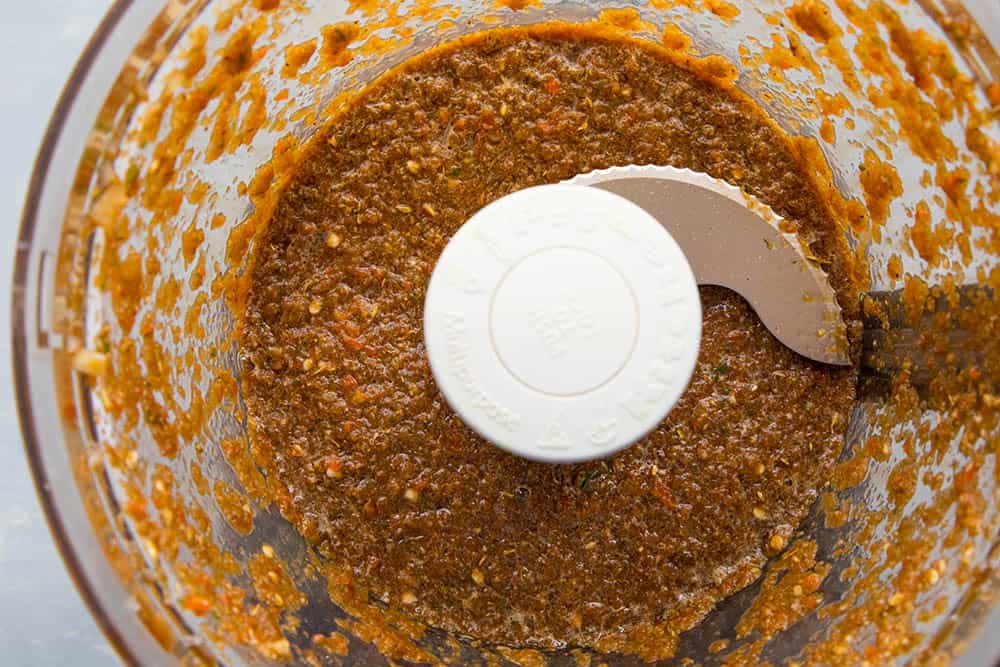 Use immediately. Store the leftovers in the refrigerator in an airtight container.

The Taste of Jamaican Jerk Sauce

This sauce is rather piquant and will certainly bring the spice. Aside from the obvious heat, the broad mixture of spices are fresh, so you’ll get plenty of bite and fresh flavor.

It is quite herbal and notably Caribbean with the use of nutmeg, allspice and scotch bonnets. You can cook the sauce to blend the flavors more, though they will be more mellow when merged.

About the Peppers and Adjusting the Heat

This is a fairly hot sauce recipe. I rate it as medium-high because of the inclusion of the Scotch Bonnet peppers. Scotch Bonnet peppers offer quite a bit of heat. They range from 100,000 to 350,000 Scoville Heat Units (SHU) which is anywhere from 12 to 140 times hotter than a jalapeno pepper. 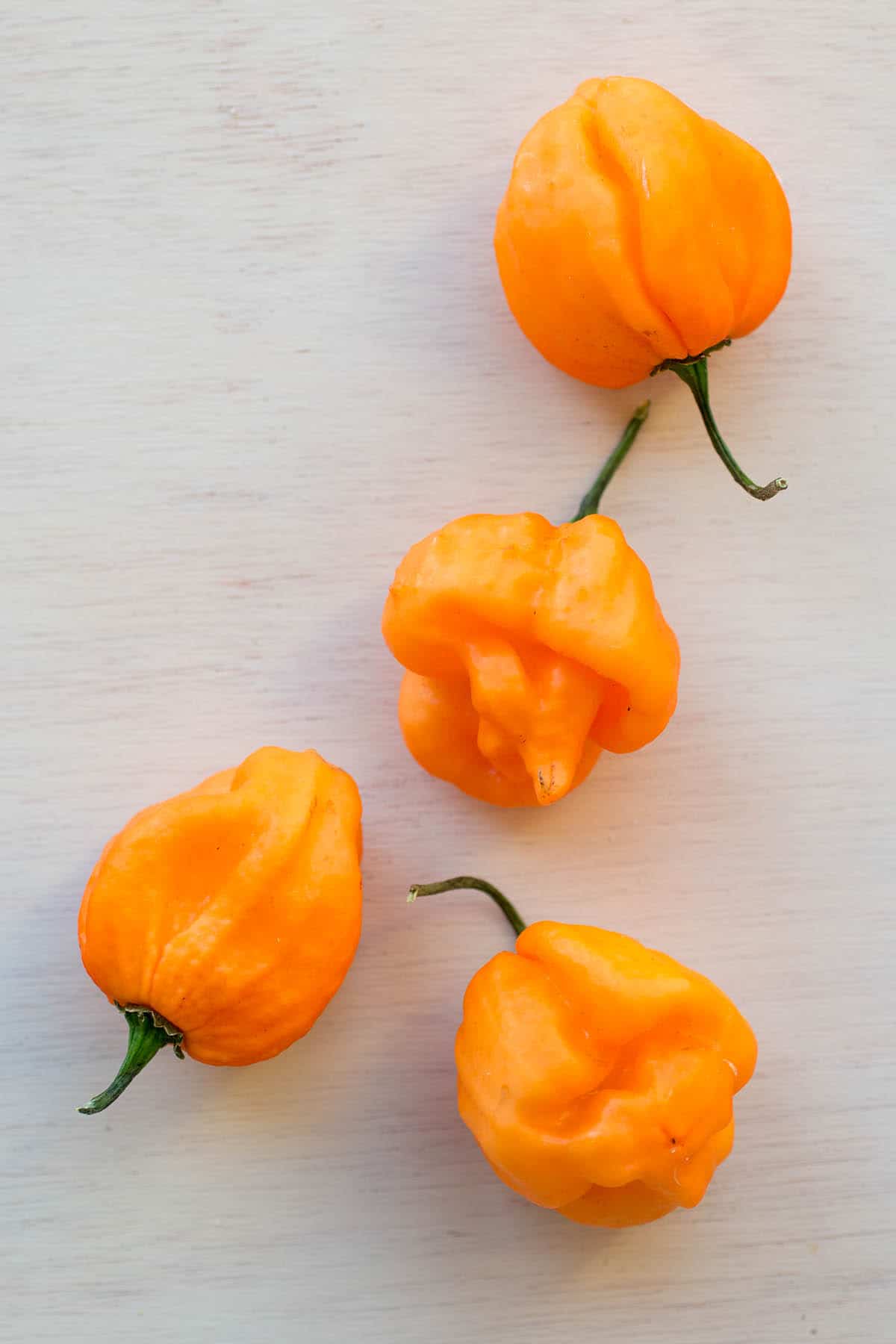 If you’d like a milder version of this recipe, either reduce the amount of Scotch Bonnets used, or replace with with milder peppers. I think this is great with just about any aji chili peppers. Or, try it with the more commonly found milder banana peppers or any colorful sweet pepper.

Of course if you’re looking for something even hotter and spicier, you can incorporate hotter peppers, like ghost peppers or the crazy wildly hot Carolina Reaper. Yes!

Or just add in some spicy chili flakes or powder to achieve the spice level you desire.

When working with hot chili peppers, it is important to wear gloves when handling them both in raw and dried forms. The oils can get on your skin and cause burning sensations.

Need help? How to Stop the Chili Pepper Burn On Your Skin.

Also, the fumes from the chili peppers and/or the fine powders may get into the air if you are not working in a well ventilated room, so you may want to wear a mask and goggles. 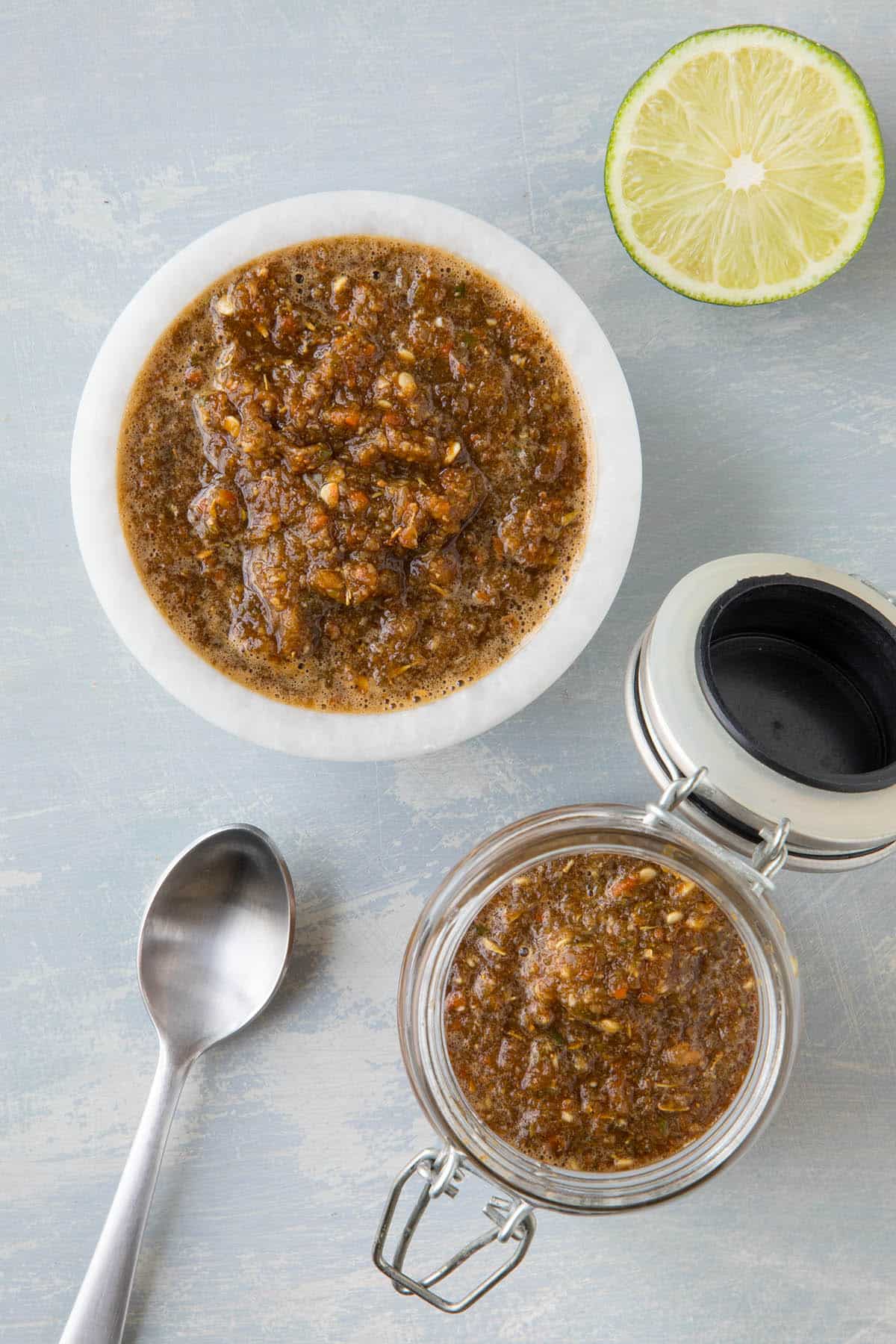 That’s it, my friends! I hope you enjoy your jerk sauce! Keep it spicy for me! Let me know how it turns out for you.

Try Some of My Other Popular Recipes 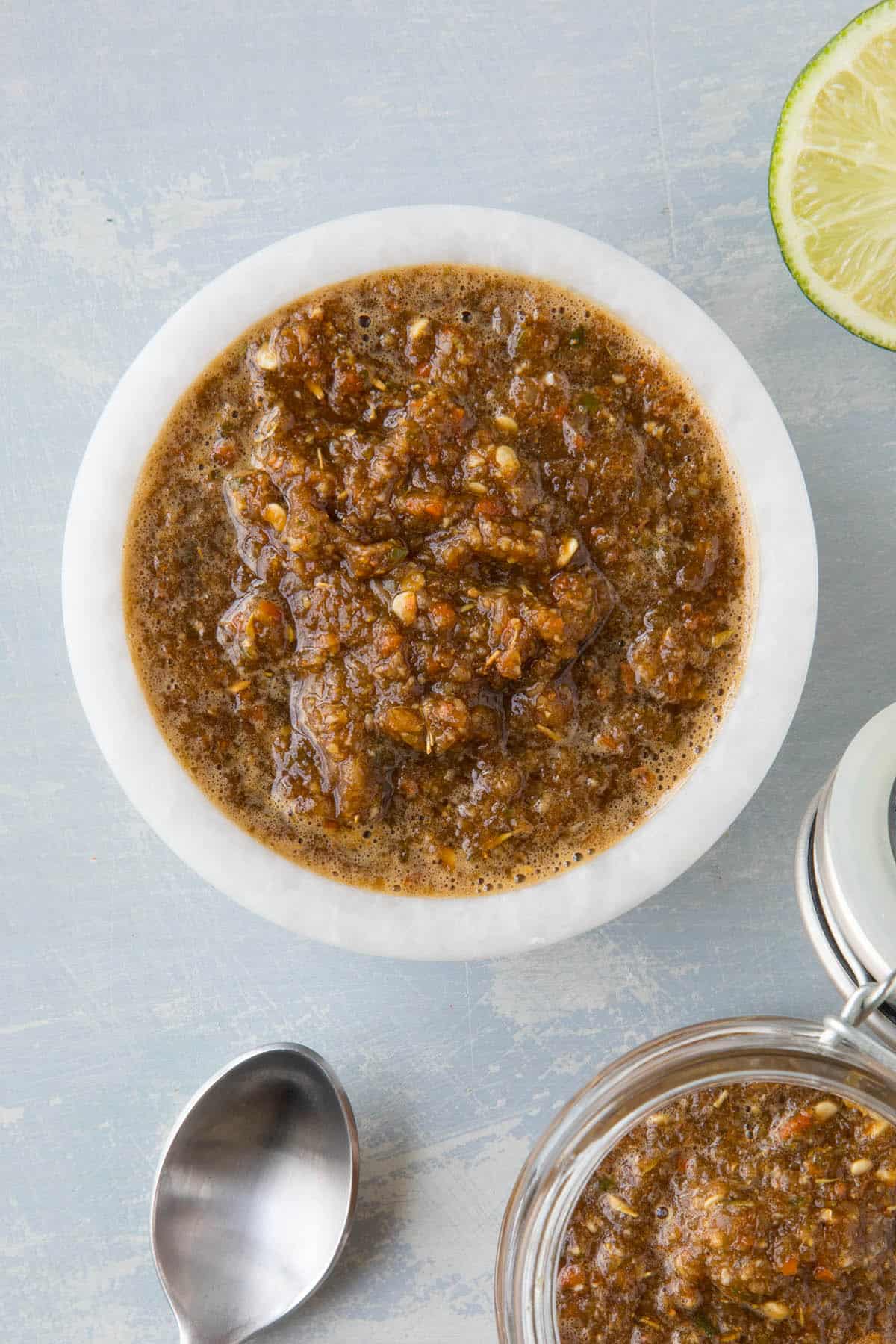 Heat Level: Medium-Hot. You will get a good level of heat from Scotch Bonnets, which are very comparable to habanero peppers in both heat and flavor. You can bring up the heat by incorporating more Scotch Bonnet peppers, or by using hotter peppers or chili flakes. Bring down the heat level by reducing the Scotch Bonnets, or by replacing them with milder peppers.