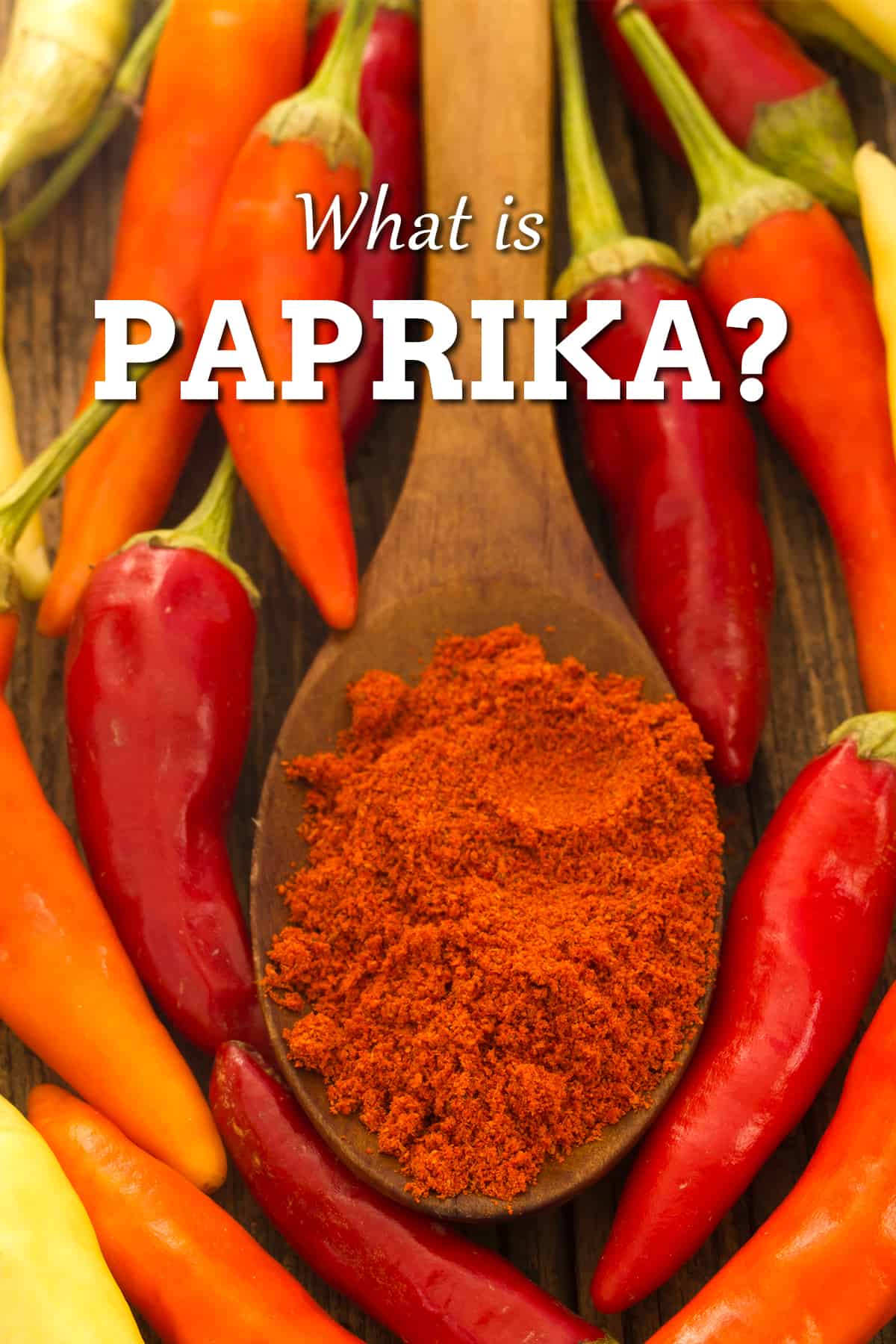 Paprika is a hugely popular chili powder made from dried ground peppers. It is typically made with sweet peppers, though it is usually sold as sweet, hot, or smoked paprika. Learn all about it.

Cooks around the world have been spicing up their foods with chili powders for generations. There are as many, if not more, chili powder varieties as their are chili peppers. Imagine, you can combine different dried powders into combinations Nature can’t provide.

One of the most popular chili powders in the world is a bright red spice called “Paprika”. The spice offers up a vibrancy in color and a bit of subtle flavor without a lot of heat. It is popular for sprinkling over deviled eggs, adding color and flavor to dry rubs, or for generally adding some pizzazz to your daily meals.

Most people are used to cooking with the mild version from blends sold in your typical grocery stores, but did you know there are many different types of paprika?

Learn more about this fabulous spice.

Paprika is a chili powder made from dried red peppers, which gives it its characteristic vibrant red color. It is often made from larger, sweeter peppers of the plant Capsicum annuum, which includes bell peppers and many other peppers, though some hot varieties are made from hotter peppers and can include some seeds and pith. The chosen peppers are dried, sometimes smoked, then ground into a fine powder that can be used as a general seasoning in a variety of recipes. The different varieties of paprika are categories as sweet paprika, spicy or hot paprika, and smoked paprika.

More on the different paprika types below.

The Different Types of Paprika

There are several categories of the spice that overlap, depending on how they are described. These categories include Sweet, Hot, Smoked, Spanish, and Hungarian.

Sweet Paprika. Sweet paprika can go by different names, including domestic, plain, regular. Most of what you’ll find in the U.S. is this more common variety. It is sometimes mixed with other peppers, like cayenne, to add a touch of heat, though it is commonly made with milder, sweeter chili peppers. Despite being called “sweet”, it is somewhat mild, though slightly sweet, in flavor and used often as a garnish. This variety can be produced anywhere in the world, though often refers to the Hungarian variety, where it is more commonly produced.

Hot Paprika. Hot paprika, aka spicy, is the same as the sweet variety, only made with either spicier peppers or peppers that include some of the inner pith, where much of the heat resides. You’ll get a milder flavor with the hot variety, though a noticeable level of heat. This variety can refer to either the Spanish or Hungarian varieties.

Smoked Paprika. Smoked paprika more often refers to some varieties of the Spanish version, as smoking the peppers is a popular preparation method there. The flavor brings a light smokiness from the drying process, which includes wood smoke until dried. After smoking and drying, the peppers are ground into a fine powder. Smoked paprika can be either sweet or hot.

Spanish Paprika. Spanish paprika ranges from sweet and mild to medium to hot, depending on the type of peppers used as whether or not the spice includes some of the hotter pepper innards. In Spain, the peppers are harvested and dried over wood fires or in traditional smoke houses, imparting the blend with its characteristic smokiness. It is used in traditional Spanish dishes, like paella, but can be used in any recipe where you are looking to achieve a touch of smoky flavor.

Hungarian Paprika. Paprika is the national spice of Hungary. There, the seasoning is used like salt and pepper, as a common table spice. It is important for traditional Hungarian dishes, such as goulash. There are eight grades of paprika in Hungary, varying and categorized by the level of pungency and heat, though most of these varieties are sweet. Peppers are harvested, toasted, then blended to create these varieties.

The 8 different levels of Hungarian paprika are:

Here are some answers to the most commonly asked questions about paprika.

The spice is more commonly mild, though it can vary from mild to hot. Mild paprika is made from the outer pepper flesh, with most of the seeds and innards removed. The hot variety is made with some of the seeds as well as the placental innards, which is where the heat of the peppers resides.

The flavor varies from country to country, depending on the types of peppers used to make it as well as the preparation method. Most varieties are slightly mild and sweet, though some variations are a bit hot and some are somewhat smokey, as the peppers are smoked during drying.

Where Does Paprika Come From?

Paprika has been cultivated by the people of Mexico for centuries, where it grows in the wild. The peppers spread through the world with travelers, being introduced to Spain and Hungary in the 16th century, where they became and remain hugely popular. The name derives from the Hungarian word, “paprika”, which means pepper.

The spice is produced in many different places around the world, including Argentina, Mexico, Hungary, Turkey, Serbia, Spain, the Netherlands, China, and the United States.  Hungary is a major producer of the spice.

How Do You Dry Paprika Peppers?

Through history, people have grown and dried chili peppers in the open air, letting the blazing sun bake the moisture out of them. This works great in dry climates, but if there is too much moisture in the air, the peppers can rot. Today, you can use your oven at low temperatures, or use a dehydrator, which is the most foolproof method. Simple wash and dry the peppers, slice them then dehydrate them at 135 degrees F until they become brittle. Then, grind them into a fine powder.

With paprika, often the peppers are first toasted, then dried, or smoked and dried. See below.

Learn How to Dehydrate Chili Peppers and Make Chili Powders and Blends here. I am the author of “The Spicy Dehydrator Cookbook“.

How Do You Smoke Paprika Peppers?

You can smoke chili peppers in a traditional smoke house, where they are heated slowly by smoking grills with smoldering oak until they are completely dried, or you can use your home smoker. With a home smoker, the ideal temperature is 200 degrees F, so the peppers do not burn. I like to smoke my peppers for 2-3 hours then finish them off in a dehydrator to completely dry them out.

Once dried, I then grind them into a fine powder to use as a seasoning.

What is Paprika Made From?

Paprika is made from dried ground peppers. The types of peppers can vary. Most commonly used peppers are milder peppers, such as the red bell pepper or the pimento, though some hotter varieties can be used.

What is Paprika Used For?

Paprika is used as a spice for adding flavor to many different foods. It is hugely popular in Hungarian cuisine, Spanish cuisine, as well as American cooking. It can be used to sprinkle over appetizers for a touch of color, but it is often used in spice rubs and seasoning blends for both color and flavor.

Is Hot Paprika the same as Cayenne?

No, they are not. Cayenne is made from dried ground cayenne peppers, which offer up a good level of heat and spiciness. Hot paprika is made from other peppers that include some of the spicy innards of the pods, giving it a touch of heat, though the blend may contain some cayenne powder.

Is smoked Paprika hot or sweet?

Most smoked varieties are sweeter in flavor, though some varieties can offer up a touch of heat if they are made with some of the spicy innards. You will find both hot and sweet Spanish paprika varieties, which are usually smoked.

LEARN MORE ABOUT THESE OTHER INTERESTING SPICE BLENDS

Got any questions? Contact me anytime. I’m happy to help.