Chili Paste from Around the World 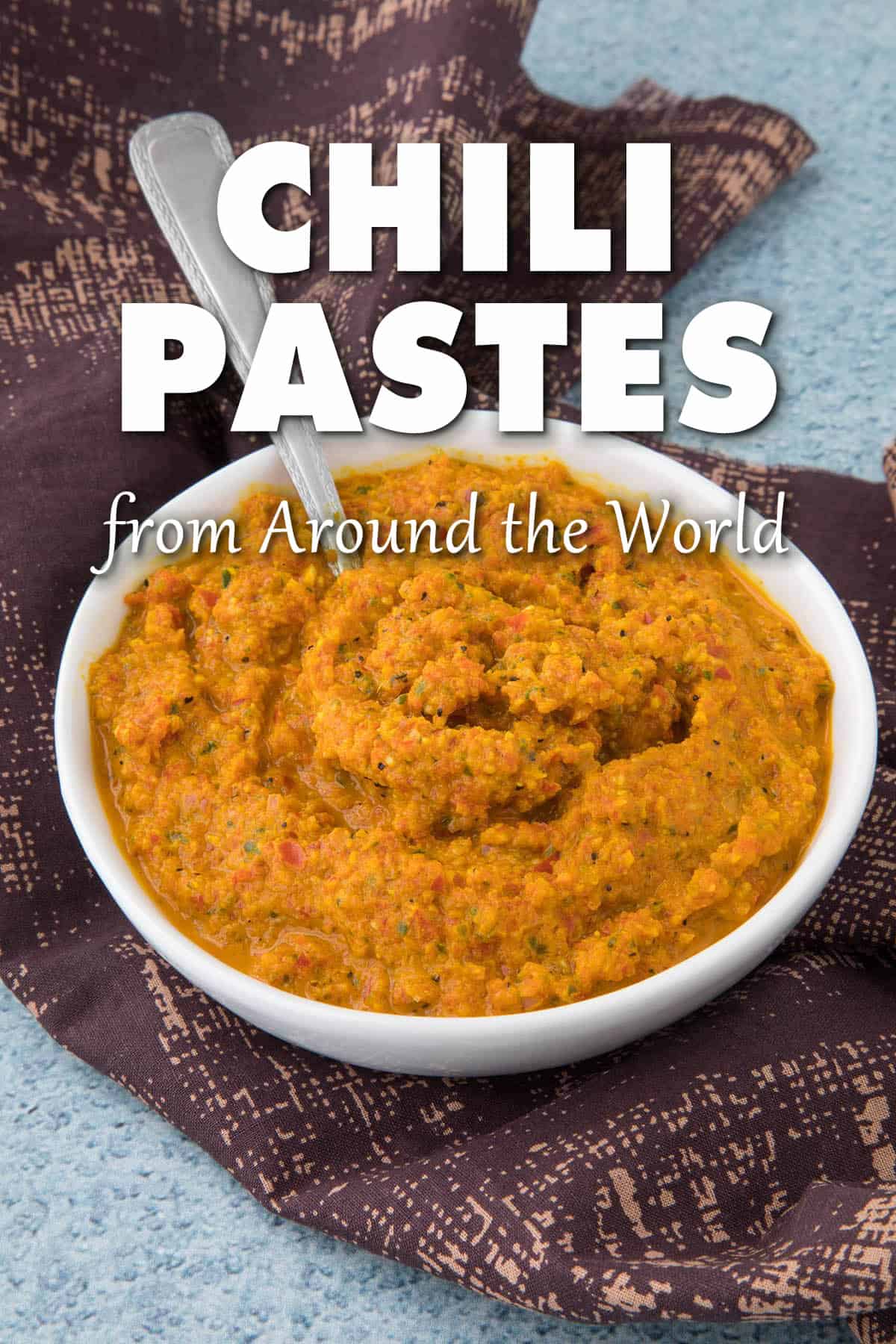 Chili paste is an essential ingredient for many different cuisines around the world. Here is a list of different chili pastes you may want to look for.

Chili paste is essentially a paste made from chili peppers. It is a highly versatile ingredient, used to add flavor, pungency and character to many cuisines. The type of paste varies from culture to culture based on cooking traditions, but also on the peppers available to that region.

It comes in many different forms, from thick, processed pastes that stick to a spoon to thin, watery pastes that pour from the jar, to chili pastes with more of a sauce like consistency to pulpy pastes with lots of texture.

Some are nothing but ground chili peppers, while others have added ingredients. Regardless of the texture, it is an ideal way to build flavor into many different foods.

Here is a list of chili pastes from around the world you may want to seek out for your cooking adventures. This is not an exhaustive list, but a representative list of different types. Feel free to comment to include other types of chili pastes. There are many!

Ajika. Ajika, aka adjika, is a spicy Georgian dip made with hot red peppers, garlic, herbs, spices and walnuts. More of a dip or spread, like ajvar, it is very much like a chili paste.

Ajvar. Ajvar, pronounced “Eye Var”, is a sauce or condiment made primarily with red peppers and oil, though an extremely popular variation includes eggplant (called Malidzano), which I’ve chosen to make here. You’ll find it common in the cuisine of the Balkans. In Serbia, Ajvar is called “Vegetable Caviar”. It’s definitely more of a condiment, but very much like a chili paste.

Ancho Paste. Huge in Mexican cuisine, ancho paste is made by rehydrating dried ancho peppers and grinding them into a chili paste. It is used in many different Mexican recipes. The same can be done with other dried Mexican peppers, such as the pasilla, guajillo, chile de arbol and more, and are often mixed together for different flavors.

Calabrian Chili Paste. A spicy chili paste from the famous Italian region, Calabrian chili paste is made by crushing Calabrian peperoncino (dried peppers) with extra virgin olive oil. It is used to flavor many Italian dishes.

Curry Paste. Curry is wonderfully spicy and filled with so many satisfying flavors. It’s a spicy food lover’s dream dish. Curry pastes are usually made with a number of different ingredients and seasonings, but at its core is chili peppers. It is essential to many Thai and Indian dishes. Try my Red Curry Paste Recipe.

Gochujang. Gochujang is a Korean fermented red chili paste made from chili powder, glutinous rice, fermented soybean powder, barley malt powder, and salt. It is thick and pungent in flavor, adding a zingy depth to your dishes. It is both spicy and sweet.

Harissa. Harissa is a highly popular chili paste used in North African and Middle Eastern cuisine. The recipe varies by the region, so you will find variation after variation of harissa, depending on the local ingredients.

La Jiao Jiang. La Jiao Jiang is a Chinese chili paste made from a mix of hot peppers, vinegar and salt.

Peri Peri. Peri Peri sauce is a traditional African sauce made from spicy African Bird’s Eye chili peppers. It is also known as piri piri, or pili pili. It’s perfect for any spicy food lover. It is often very thick and made without cooking, so I am including in the chili paste list.

Piros Arany. Piros Arany is a Hungarian chili paste made from paprika and salt. It is usually sold in tubes, Red Gold being the most well known brand.

Sambal Oelek. While Sriracha is distinctly Thai, Sambal Oelek is Indonesian, and it is essentially a raw chili paste that is ground. It uses very few ingredients, traditionally red chili peppers, vinegar and salt. It can be used as a base to make sambals and other sauces, and works best when used more as a condiment or flavoring ingredient than as a direct sauce or hot sauce.

Shatta. Shatta is a chili paste from Egypt. While there are many variations from cook to cook, it usually consists of peppers, tomatoes, garlic, nuts, herbs and seasonings.

Sofrito. Sofrito is a sauce used as a base for building flavor into numerous dishes ranging from soups to stews to pots of rice. It is common in Italian, Portuguese, Spanish, Latin American and Caribbean cuisines, where it goes by different names, such as “sofregit”, “estrugido” or “refogado”.

Sriracha. Sriracha is more of a sauce, but is very much like a paste in consistency. Famous “Sriracha” sauce is named after the town of “Sri Racha” in Thailand where it originated, but this is not what we consume here in the United States. The stuff you get from the store is produced in California with red jalapeno peppers and has deviated quite a bit from the original Thai recipe.

Thai Chili Paste. There are different types and recipes for Thai chili paste, essentially made from fresh or dried Thai chili peppers, ground with oil and other possible ingredients, like garlic, shallot, fish sauce, tamarind, palm sugar and more.

Zhug. Zhug is made from oil and herbs with lots of chili peppers and hugely flavorful seasonings. It originated in Yemen, though it is widely popular in Middle Eastern Cooking. There are other variations on this recipe, such as “brown zhug”, which includes tomatoes, as well as “red zhug”, which includes hot red chili peppers. Zhug also goes by the name of “Shug”, “Shoug”, “Schug”, “Skhug”.

HOW TO MAKE CHILI PASTE

Here are some common questions I receive about chili pastes.

What is the difference between chili paste and chili sauce?

Does chili paste need to be refrigerated?

Chili paste should be refrigerated to keep it longer. Even if the chili paste has a low pH, it runs the risk of spoiling if kept outside of the refrigerator. It is best if kept in a closed container in the fridge.

Got any more for the list? Let me know and I’ll work on adding them.