Cayenne Peppers – All About Them 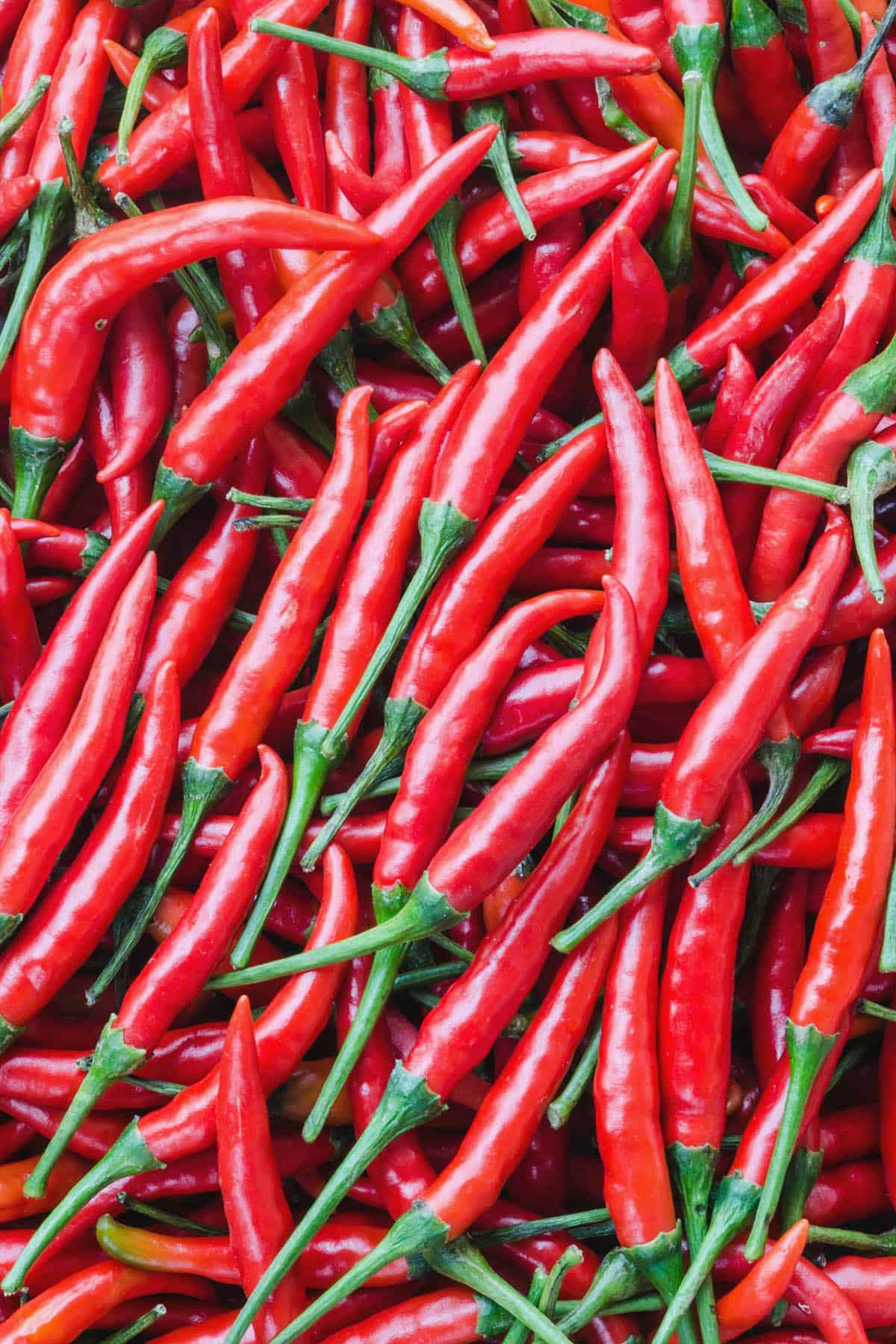 The cayenne pepper is a thin chili pepper, green to red in color, about 2 to 5 inches long. The “cayenne pepper” spice you find mostly in pizza restaurants is the dried, ground version of this pepper. Learn more about them here.

The cayenne pepper is a thin chili pepper, green to red in color, about 2 to 5 inches long. The “cayenne pepper” spice you use mostly in pizza restaurants is the dried, ground version of this pepper.

It belongs to the nightshade family of flowering plants and are related to bell peppers and jalapenos.

The cayenne is a bright red chili ranging from 2-5 inches long and about 1/2 inch in diameter. Cayenne chilies are usually sold as a powder, as cayenne pepper.

The word cayenne comes from the city of Cayenne in French Guiana. Cayenne is great in soups and sauces, on pizzas, as well as over meats and seafoods. Keep it on the table in a shaker as an alternative to salt or pepper.

History of the Cayenne Pepper

The cayenne is one of the most popular peppers used in the Western hemisphere. The name of the pepper is taken from the city of Cayenne in French Guinea, from where the pepper originates and where its first documented uses were found.

Cayenne peppers are usually used as a dried spice, which is made by drying and grinding the peppers or pulping and baking them into cakes, which are then ground to produce the spice.

Cayenne peppers can also be used fresh in dishes, but are a little harder to find outside of the powdered form.

Cayenne is a very popular pepper that is used in a variety of dishes and flavorings. You can buy cayenne pepper at most supermarkets in a variety of forms – the most noticeable form being the red powder, but the majority of chili flakes that can be found on the market are from Cayenne peppers.

In addition, the vast majority of popular hot sauces all rely on cayenne for part of their kick, particularly if the sauce also contains vinegar.

The cayenne pepper is a sub-tropical to tropical plant natively, but they can be grown as annuals in temperate climates as well. They can even be overwintered if protected from frost. Cayenne plants like some heat with a longer growing season and lots of sun, though they can react poorly to too much heat as much as too much cold.

Plant your seeds when temps are a minimum of 60 degrees F (16 degrees C) in well-drained soil. Seedlings should be spaced 18-24 inches apart in a row.

When to Pick Cayenne Peppers

Harvest your cayenne peppers when the skins are somewhat waxy in appearance, and the flesh is firm. If they’ve started to soften, they most likely have started to rot and it is too late to pick them. The color should be a vibrant red and the pods will be anywhere from 2 to 5 inches long. You can pick your cayenne peppers when they are green, though the flavor will be somewhat grassy and the heat not so intense.

The pods usually ripen in 70 days. 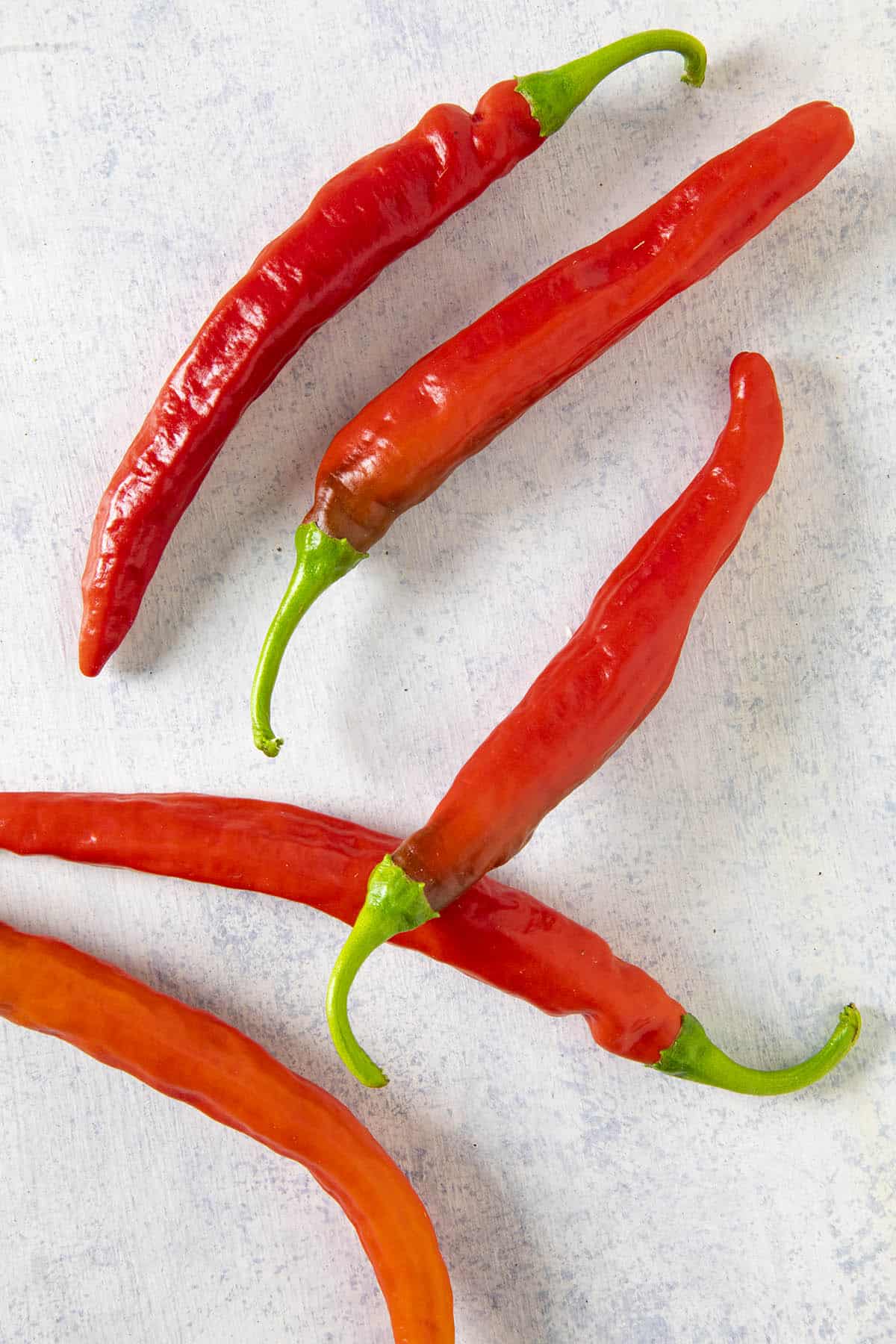 Cayenne peppers are considered a somewhat hot pepper, ranging from 30,000 – 50,000 Scoville Heat Units (SHU) on the Scoville Scale, which is about as hot as a serrano pepper. If you compare that to a typical jalapeno pepper, which averages around 5,00o SHU, the hottest cayenne is about 10 times hotter.

Cayenne contains numerous medicinal properties and are good for your health. Studies have indicated that cayenne and other hot peppers can help boost your metabolism for weight loss, curb your appetite, lower blood pressure, aid digestion, relieve pan and reduce some Cancer risks. Of course you should always seek medical advice from your physician if using cayennes or other peppers for health reasons, such as pain relief, but they are quite healthy for you.

The real benefits come from the active ingredient, Capsaicin.

Learn more about the benefits of cayenne.

A question I receive often is, what is a good substitute for cayenne pepper? If you happen to run out of cayenne powder, there are many different powders, blends and even hot sauces that you can use. See my post on cayenne pepper substitutes to help you.

There are many, many recipes you can make with cayennes for spicy food lovers. You can use them in any recipe that calls for a milder chili pepper to add a bit of extra heat and kick. I toss them into so many different recipes. Try some of these:

See also: What is Paprika?