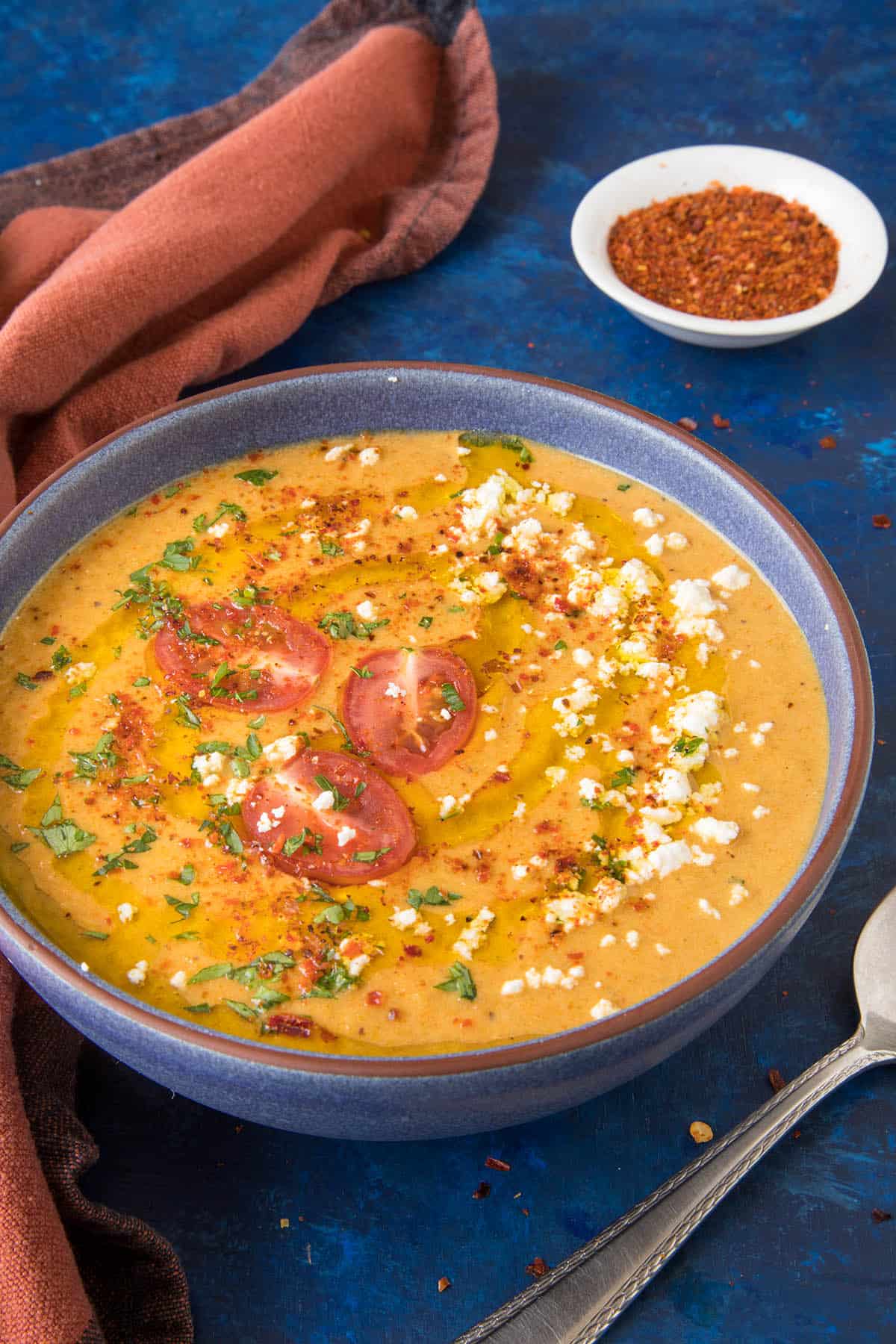 This soup is silky smooth and creamy and hugely flavorful, made primarily with roasted red Hatch chile peppers and the perfect balance of seasonings. It is both rich and light and ready to make you happy. Here is the recipe.

I recently received 5 pounds of Hatch peppers ordered from New Mexico and I’ve been greatly enjoying them. I made a seriously awesome Roasted Red Hatch Chile Sauce that was SO GOOD, I could practically drink the stuff.

It was so good, in fact, that I had to use some to make a soup recipe pretty much the same way as making the sauce, with some minor adjustments. And guess what? BOOM! Success!

Such a delicious, satisfying soup.

A Bit About Hatch Peppers

The reality is that “Hatch Chili Peppers” actually belong to the broader category of New Mexican peppers, and there are many types. You can learn more about Hatch Chili Peppers here, including types and history. Hatch peppers typically range in heat levels from 1,000 – 8,000 Scoville Heat Units, which is quite mild to about jalapeno pepper level heat.

I ordered mine online because I do not live near New Mexico, and the harvesting season runs from August through September. You can grow New Mexican types in your own garden, but my peppers are just now harvesting and I didn’t grow any this year. Luck you can order anything online!

I got a mild variety – they are New Mexico 6-4 types to be more specific – and they are DELICIOUS. They were delivered already roasted, frozen. All I had to do was thaw them out and I’m ready to get cooking!

Let’s talk about how we make this soup, shall we? 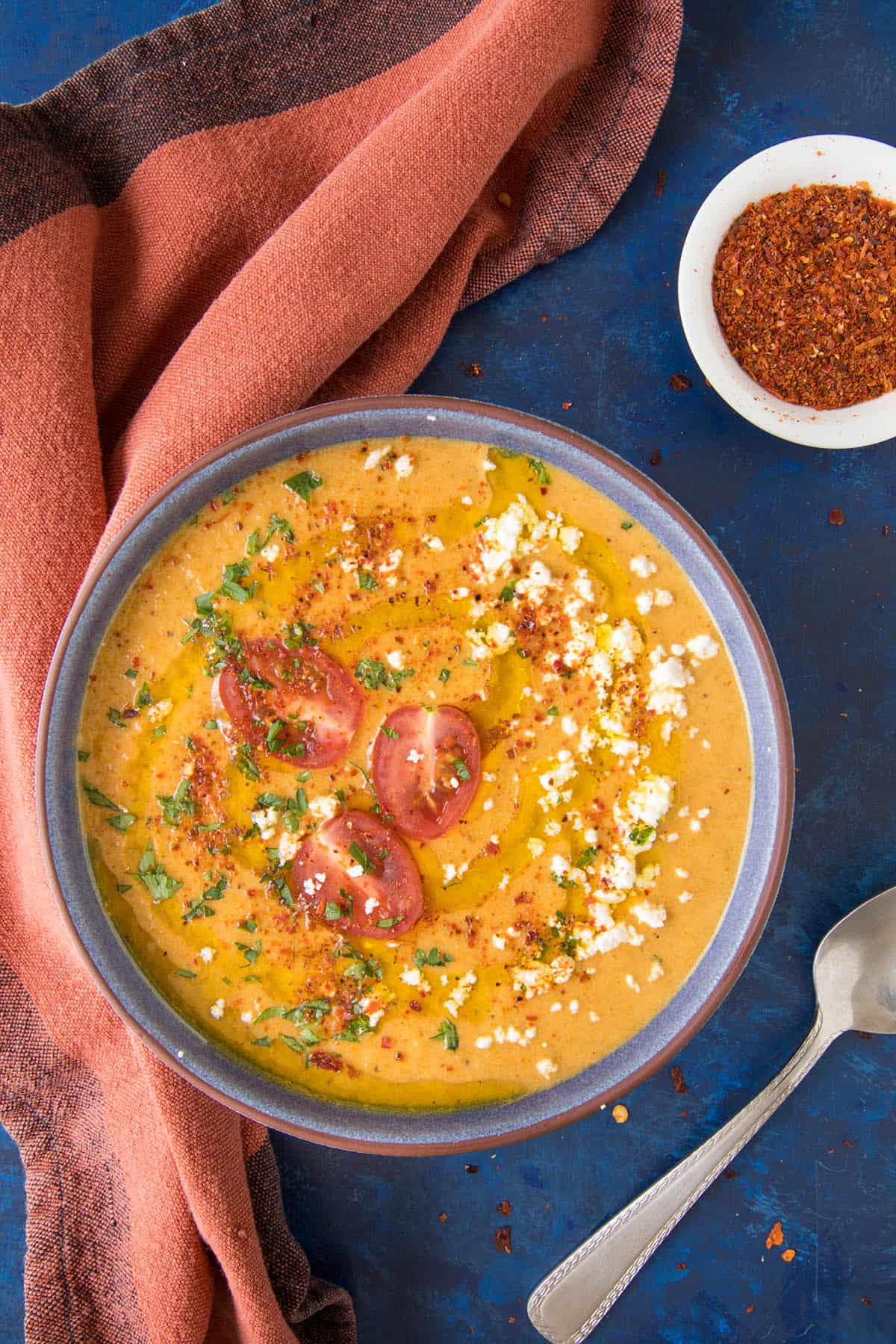 Remove the charred skins from your roasted Hatch peppers. Like so. 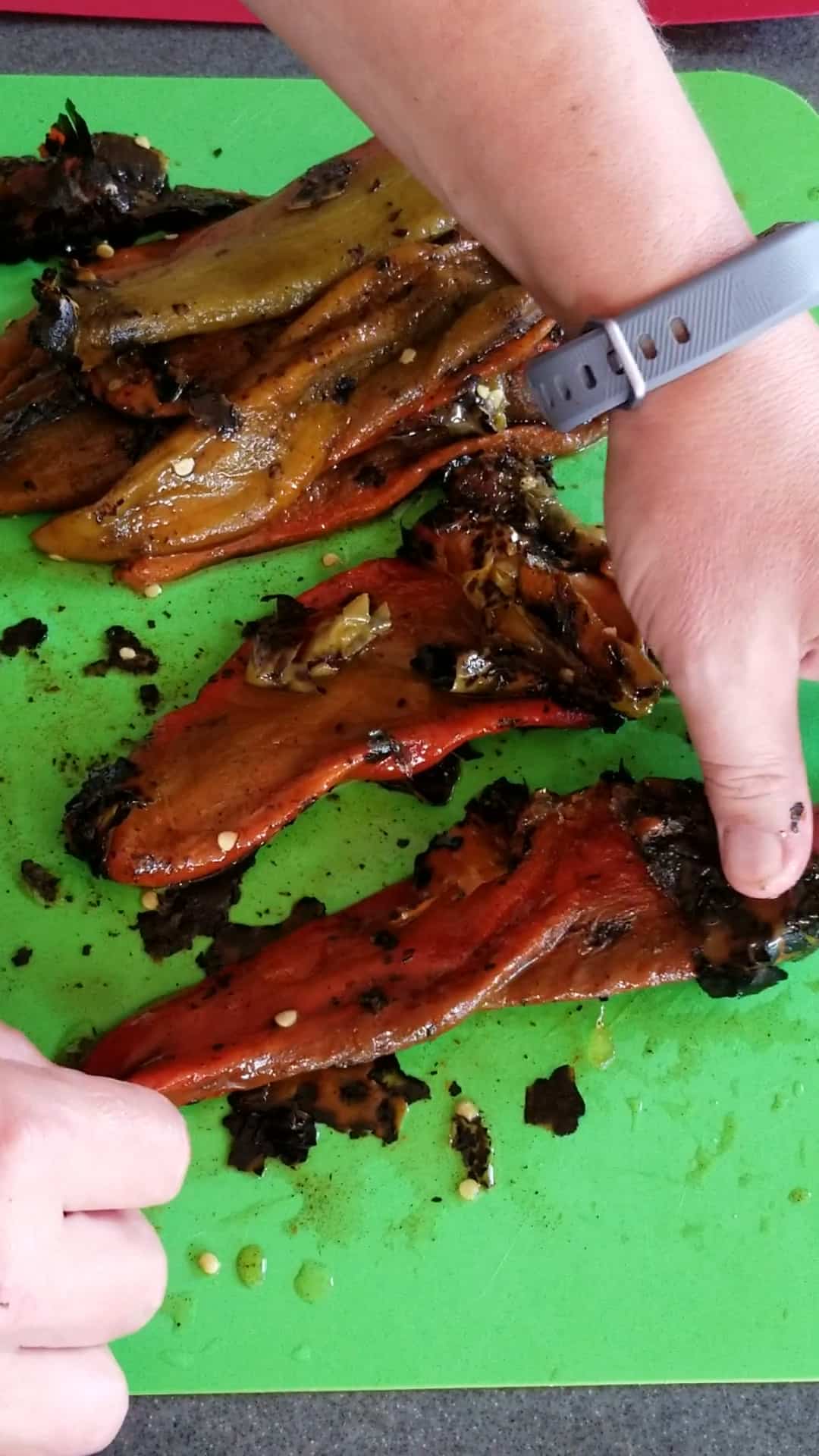 Remove the seeds and innards. 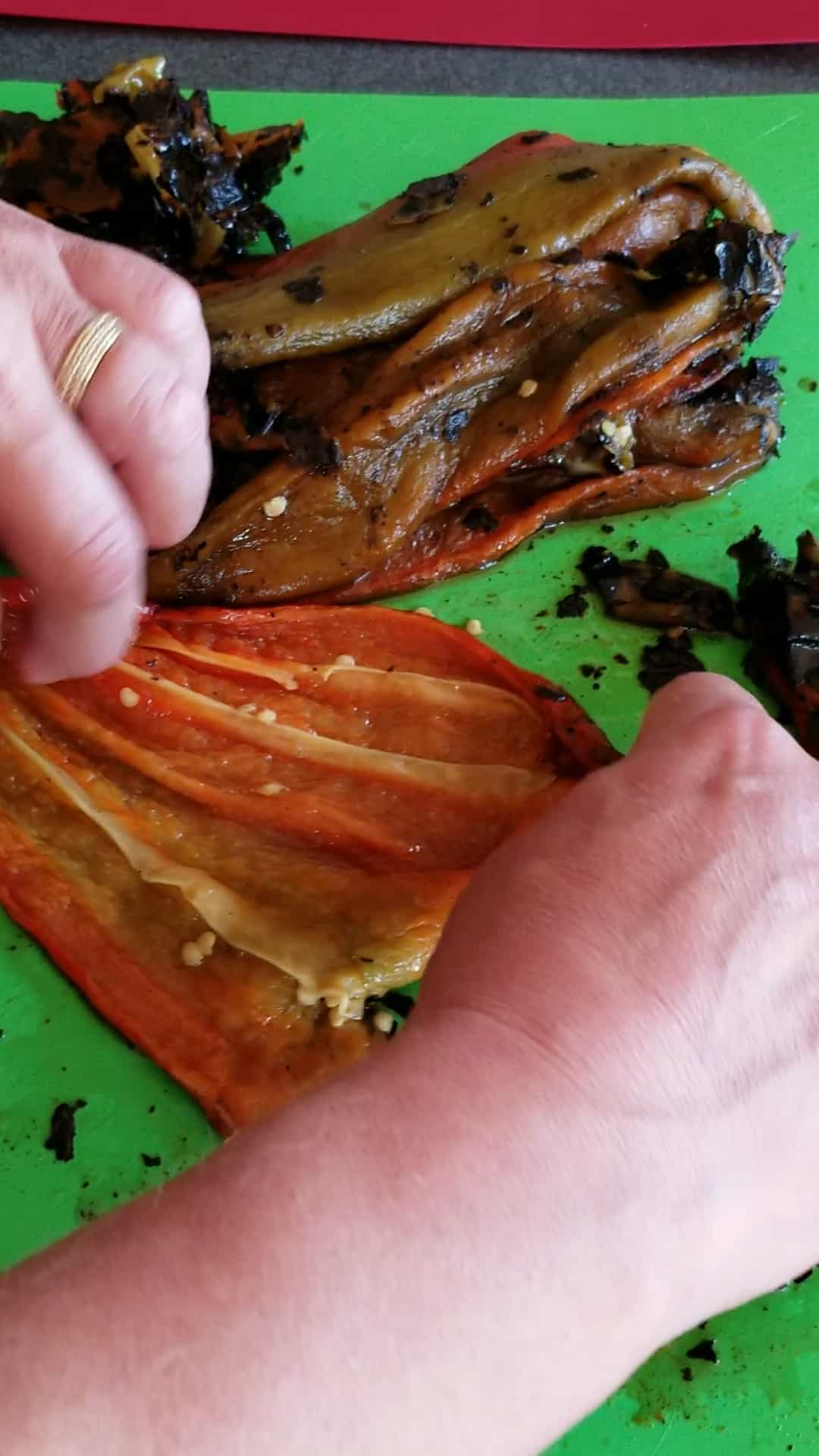 Toss the peppers into a food processor, along with some onion, garlic, and seasonings. I used a bit of spicy chili flakes, cumin and salt. Keeping it simple here. Just like the sauce. 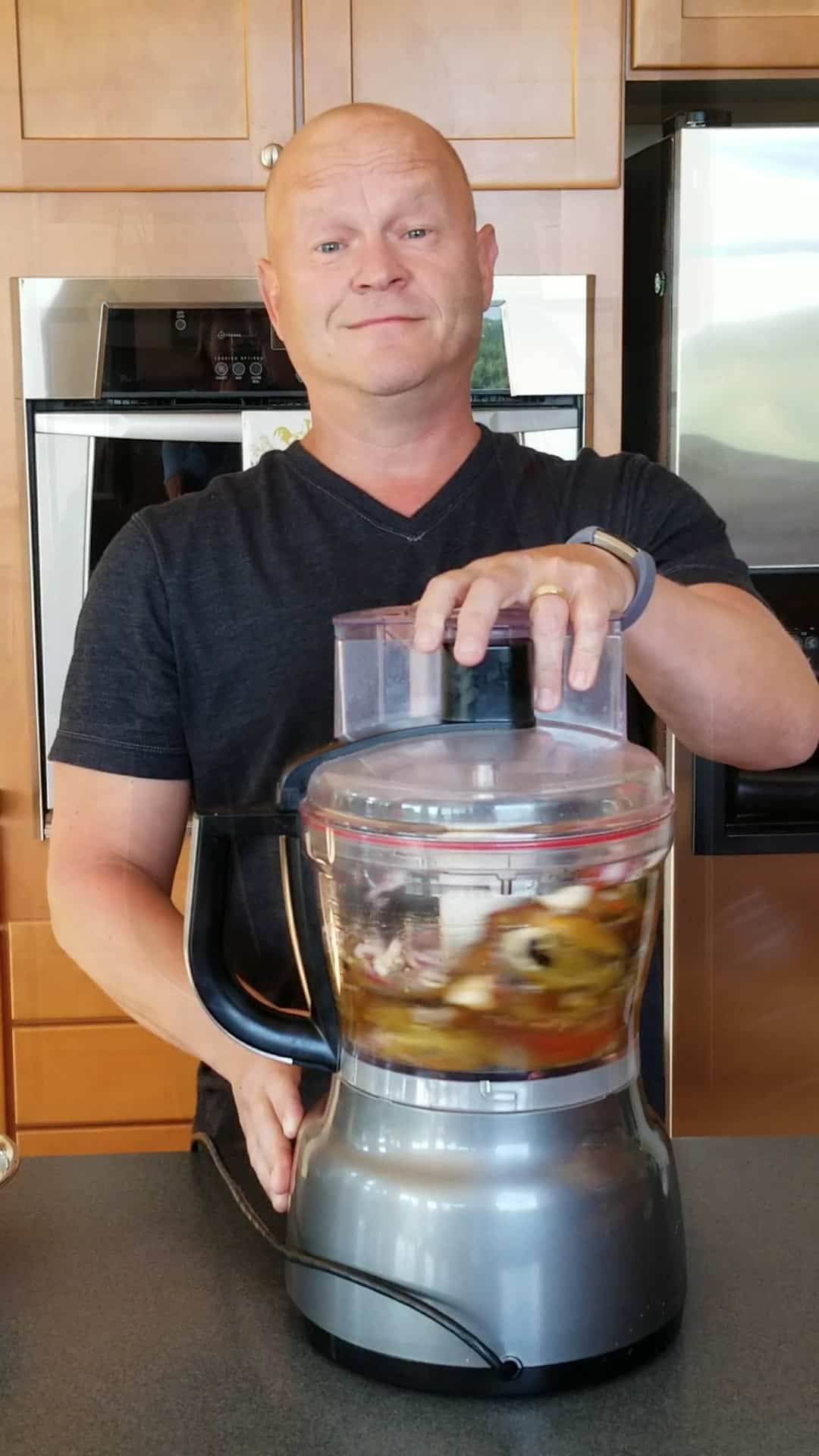 Process the mixture until it smooths out, then drizzle in some olive oil and process it. The olive oil will emulsify and thicken up the soup to an almost fluffy texture.

Transfer the soup to a pot and add in a bit of chicken broth to thin it out. Simmer it for about 10 minutes to let the flavors mingle. I used about a cup of broth, but you can use more or less, depending on your preference.

Some people like a thinner soup, where I enjoy a thicker one, depending on what I’m using it for. 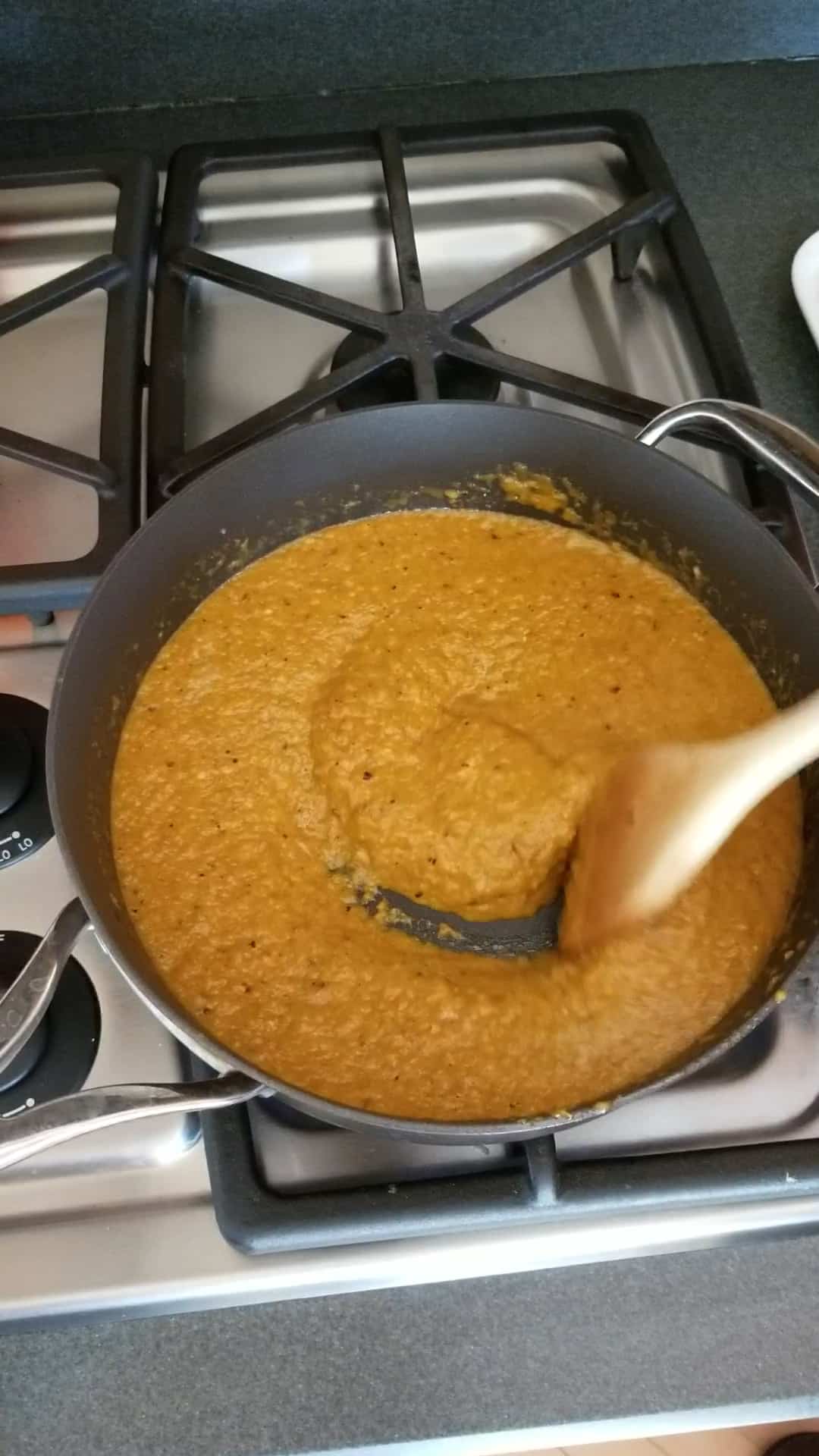 Adjust for salt and strain if you’d like to. It is not necessary to strain it, but doing so will give you a silkier sauce.

Stir in the yogurt or Mexican crema. I prefer to use crema, though yogurt and even sour cream work great here. Or, if you’re looking for an even richer version, use heavy cream. However, be prepared for the extra calories from the cream.

Heat the soup back up for a minute in the original pot and serve it up into bowls. Garnish and enjoy.

You can use other liquids to thin out your soup. I used chicken broth, but beer would be interesting, though you would need to up your simmering time to cook off the alcohol, as well as beef broth. Water works as well, or a soup base.

You can strain the sauce once it is done if you’d like as well. It may be slightly chunky, depending on your food processor. Straining it will give you a much smoother sauce.

If you order or grow a milder variety of Hatch or New Mexico chile peppers, you can easily up the heat by incorporating a spicy chili powder or spicy chili flakes. I added some chili flakes to mine for a bit of zing.

Or, either order or grow a hotter variety of New Mexican peppers, such as the Sandia pepper, which is about as hot as a jalapeno pepper.

Can You Make This Recipe with Other Peppers?

Absolutely. If you do not have access to Hatch or New Mexico peppers, you can make this with any larger, thicker walled pepper, such as the Anaheim, large Italian sweets (think Corno di Toro), and yes, even sweet bell peppers.

Try poblano peppers for this recipe as well. They’re great.

Where Can You Buy Hatch Chile Peppers?

I have a list of online resources where you can buy Hatch Chile Peppers.

Try Some of My Other Popular Soup Recipes

Try Some of My Popular Hatch Pepper Recipes 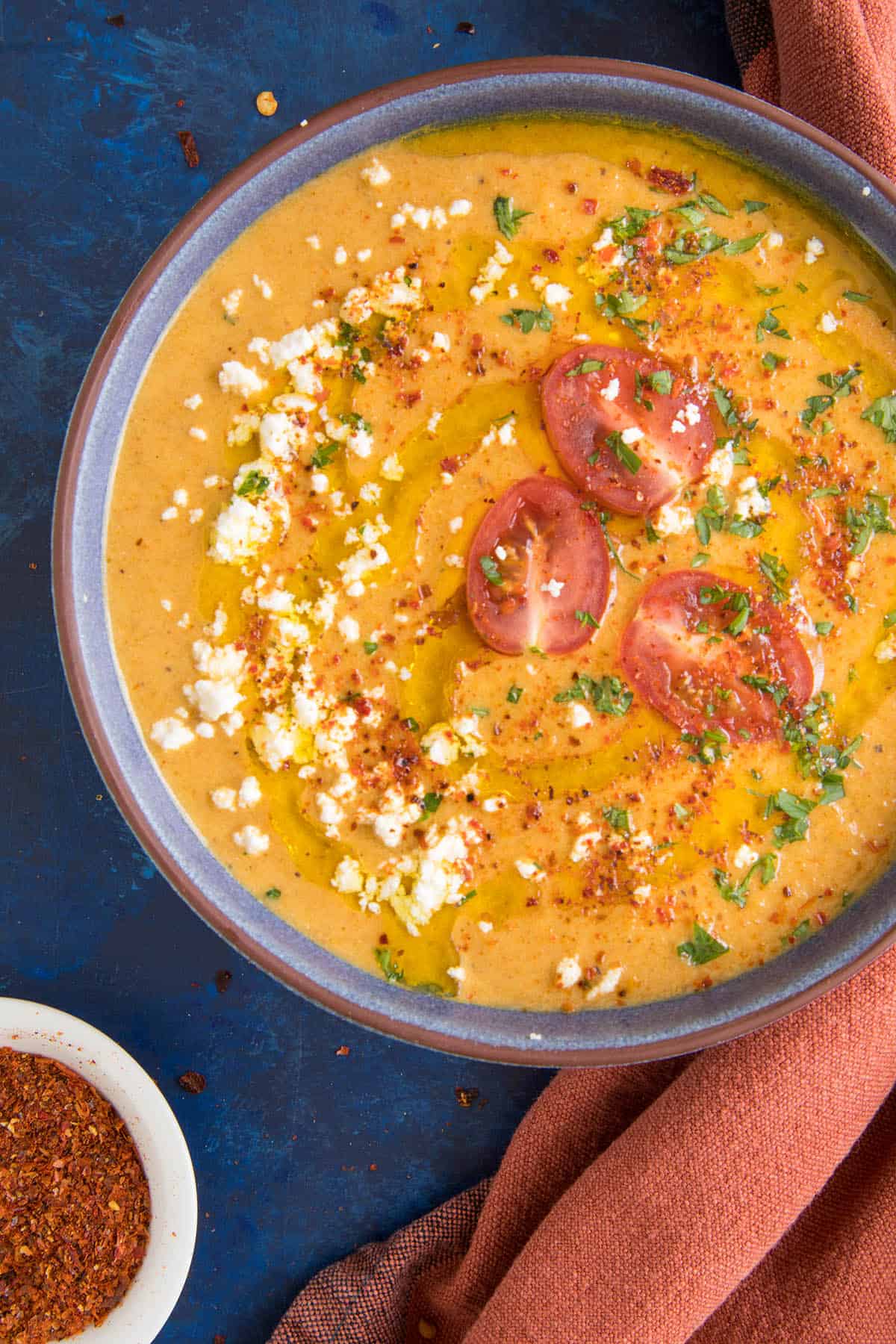 Makes 2-3 bowls. Calories based on 2 bowls. Heat Factor: Mild, though you can heat things up by using hotter Hatch Chile Pepper Types, or other hotter peppers.