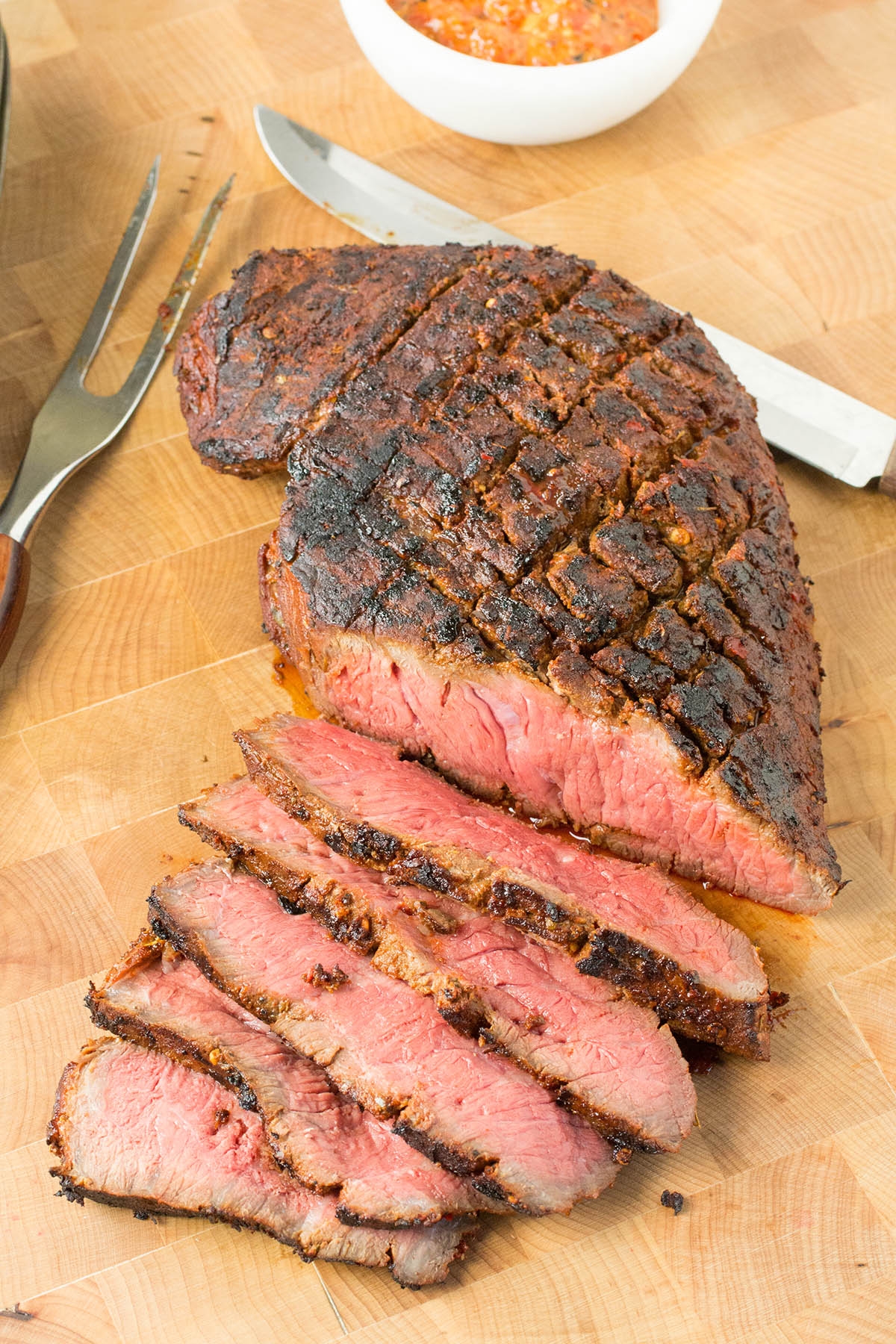 A recipe for tender grilled London Broil marinated in a homemade spicy steak marinade with fresh chili paste. Slice against the grain and serve it with chimichurri. Absolutely mouthwatering on the grill.

I am totally digging this time of year so I can grill like crazy. You name it, I like to grill it – burgers, brats, sausages, wings, and especially STEAK. Give me a good steak and I will go to town with it on the grill.

I had purchased a couple London Broil steaks from the butcher for the “Spicy Dehydrator Cookbook” I’ve been writing. My goal was to make several spicy jerkies, which I did, but wound up with an extra London Broil. Poor me, right? London Broil is ideal for making jerky because it is a leaner cut of steak.

Also known as Top Round steak, it is cut from the rear and has a lot of flavor, but it typically needs tenderizing before cooking, and grilling is ideal. The marinade makes it tender and juicy. 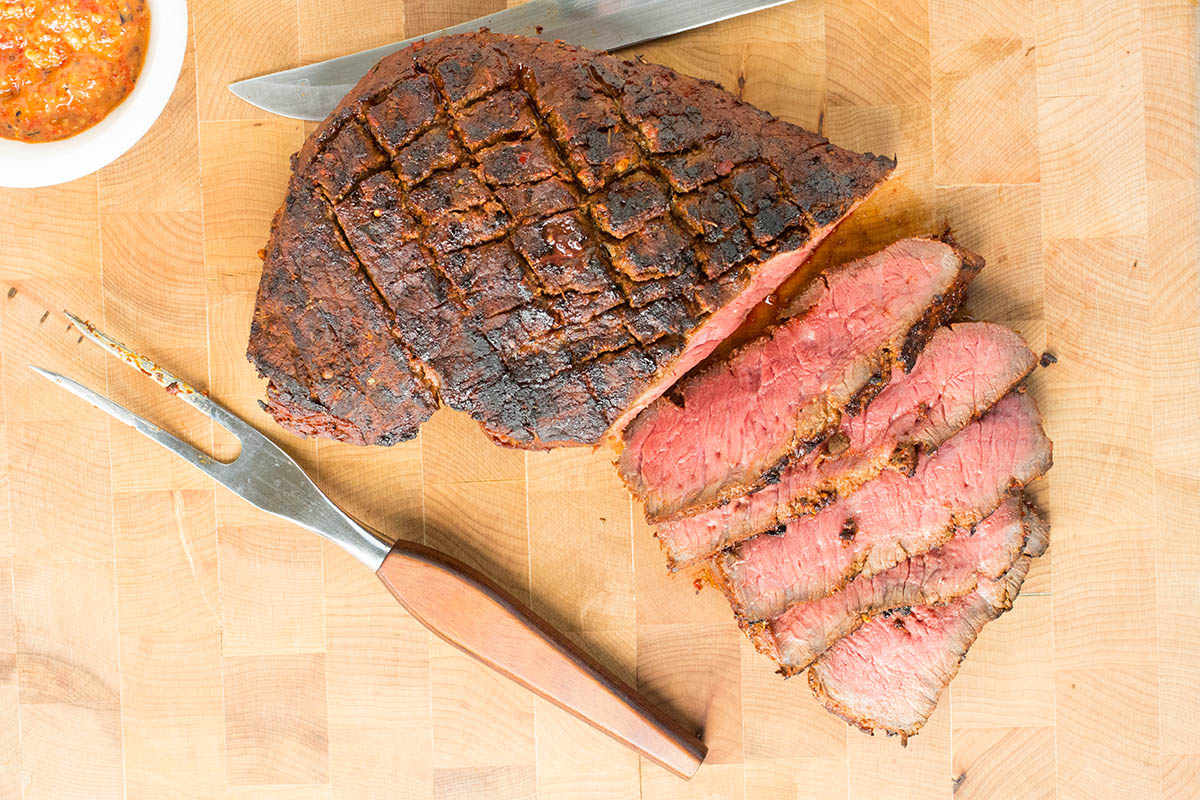 Note that the name “London Broil” refers to how the steak is prepared – marinate, cook, slice.

There is a key takeaway for this recipe in order to make it “Madness Style”. If you guys are like me, and I know you are, you want your flavors to be jacked up a few notches. You want some BOOM with your food. This recipe delivers.

The main thing is the marinade. I used our “Jacked Up Steak Marinade” for this recipe, and it is sensational. 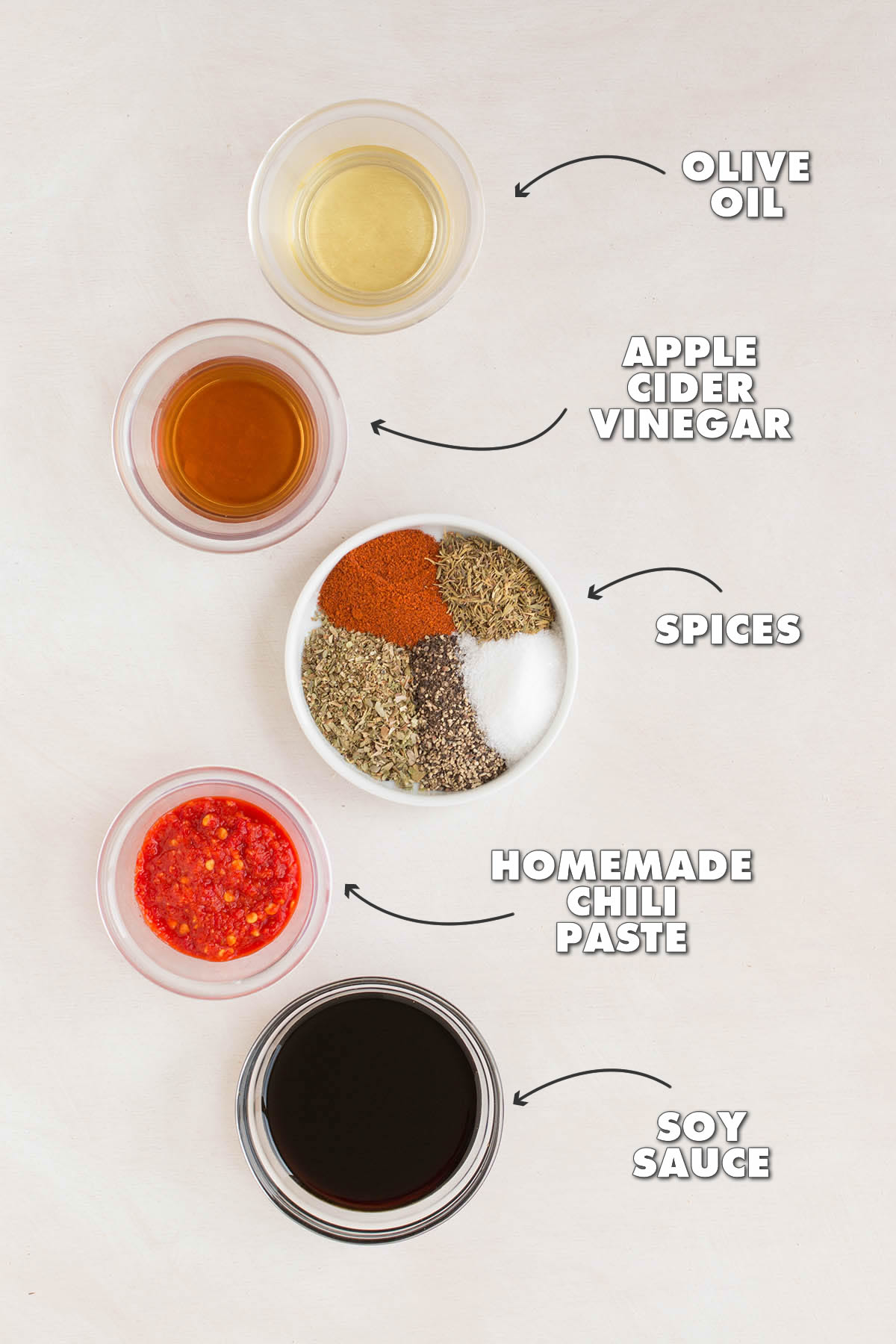 A good steak marinade not only adds flavor to your chosen steaks, but also helps to tenderize tougher cuts, like London Broil, though also consider it for skirt steak, top sirloin, or flank steak. Of course you can marinate any cut you’d like. The choice is yours. A good marinade will help you enjoy those tougher cuts, which are much more affordable, yet no less flavorful.

The big KEY in achieving that truly “Jacked Up” marinade you’re seeking is in the homemade chili paste.

To make the London Broil marinade:

About the Peppers and Chili Paste

Making Chili Paste is an easy thing, and it adds a lot of flavor, and HEAT, to your steaks. You really have a TON of choices for your chili peppers. I used a ghost pepper, habanero pepper, and a couple of vibrant red Fresno peppers to form my chili paste.

Ghost peppers have an excellent heat, over 1 Million Scoville Heat Units, and they’re quite fruity, as are habaneros, which have a very respectable heat level as well. Fresnos are no slouch, though I enjoy them for the extra flavor and color.

I can’t say enough about homemade chili paste. I LOVE my garden!

If you’re serious about your heat, include more ghost peppers, or go with something even hotter, like scorpions, 7-Pots, or the Carolina Reaper.

If you’d like to tamp down the heat and not go TOO crazy, consider red cayenne peppers or ripened red serranos You’ll still get a pleasant level of heat without going overboard.

But me? I want the heat!

How to Make Grilled London Broil

First, score the London broil with a cross hatch pattern to allow the marinade to really get in there and flavor the meat.

Marinate the steak either in a shallow dish or in a large plastic baggie. Be sure to cover the meat as much as possible.

Cover and refrigerate overnight for the most flavor impact. 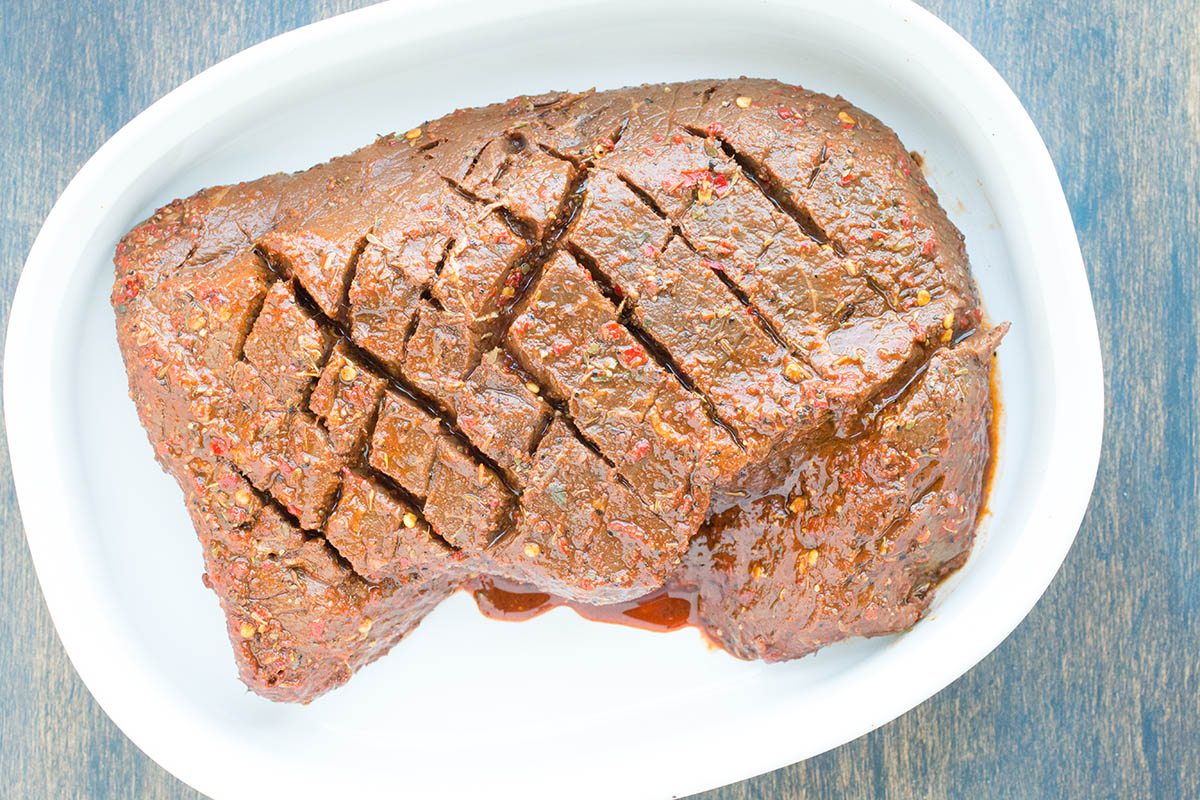 When you’re ready, get the grill going. Heat it to medium-high heat. Remove steak from marinade and add it to lightly oiled grates. Grill it for 5 minutes, then flip and grill another 5 minutes. 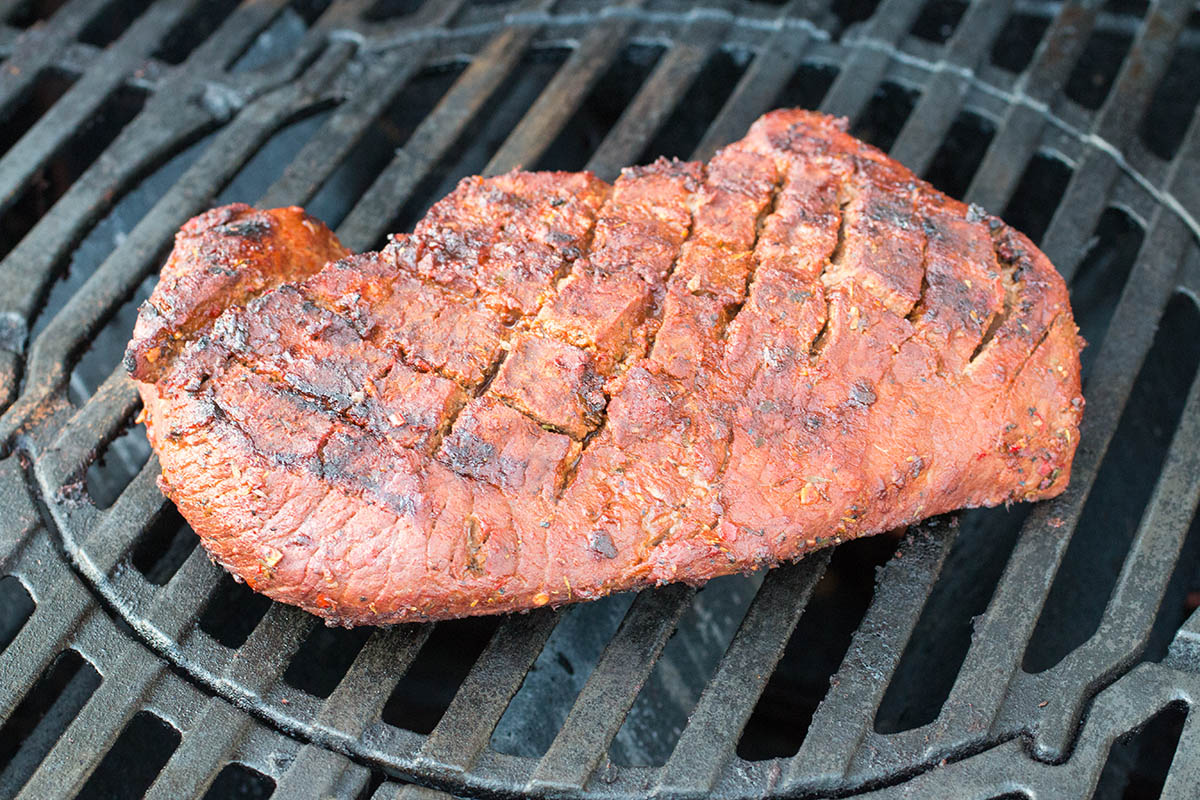 It doesn’t take very long to cook a London Broil. You’re looking for an internal temperature of 125 degrees F internally for medium-rare or 130 degrees F for medium, so keep grilling until you reach your desired temperature and doneness.

I like to use my ThermoPop meat thermometer from ThermoWorks (I”m an affiliate). Works great!

Remove from heat and let it rest 10 minutes to allow the juices within to redistribute.

Finally, slice it against the grain and serve it up! So good! 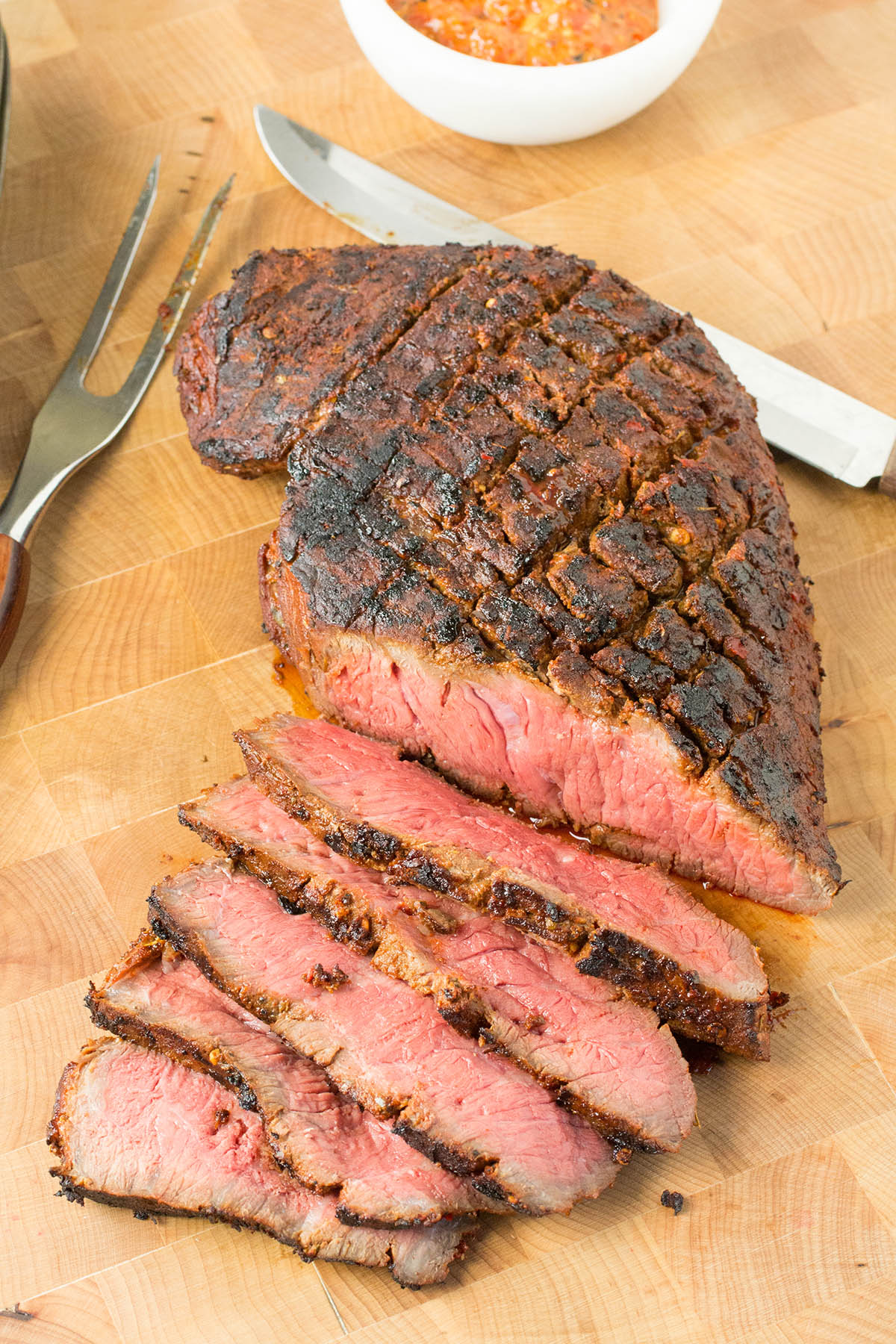 I served ours with a Homemade Chimichurri Rojo Recipe. Give it a try. It’s perfect for London Broil. I hope you enjoy it!

What are some good side dishes to serve with London broil?

I love to serve up grilled London Broil with a spicy creamy coleslaw or a scoop of Cuban black beans, but here are some other side dish recipe ideas.

Try Some of My Other Popular Recipes

A recipe for tender London Broil, marinated in a homemade spicy steak marinade with fresh chili paste, then grilled to perfection. Slice against the grain and serve it with chimichurri. Absolutely mouthwatering on the grill.