The guajillo pepper is a beloved pepper used in Mexican cuisine. It is the dried form of the mirasol chili pepper, second in popularity only to the ancho, offering sweet flavor and mild-medium heat. 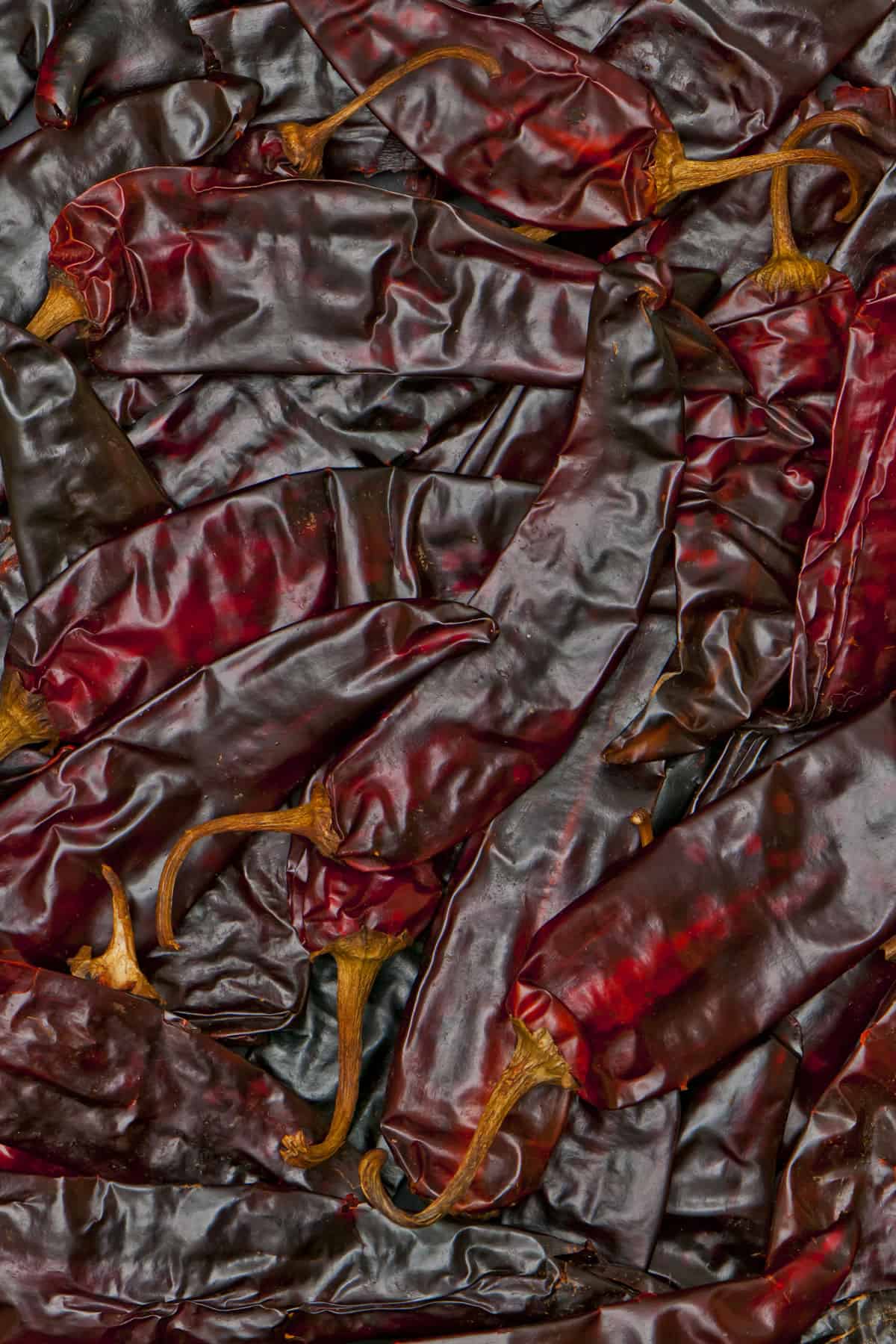 The Guajillo is one of the most common and popular chili peppers grown and used in Mexico, and a beloved pepper used in Mexican cuisine. It is mild to moderately hot, and has dark, reddish brown, leathery skin. The peppers range from 3-5 inches in length and are 1 inch wide. They are said to have either a green-tea flavor or fruity flavor, with hints of berries.

It is the dried form of the mirasol pepper, second in popularity only to the ancho, offering sweet flavor and mild-medium heat.

What are Guajillo Peppers Used For?

Guajillos, along with pasilla and ancho peppers, are used in traditional mole sauces. They are sometimes said to comprise the "holy trinity" of Mexican chile peppers, sometimes along with the dark mulato pepper, though that is a very loose term. They are great in sauces, salsas and soups and chili, especially in salsa for tamales. They can be ground down into a paste or a rub to add flavor to meat, or to make homemade harissa, a chili paste used in Tunisian cuisine.

The dried chiles are usually sold in whole, dried form, which can be either toasted and ground into powder, or re-hydrated and made into a sauce or paste.

It may also be sold in its powder form, already ground. A little of this pepper goes a long way, so experiment first to see what level of flavor you prefer.

How Hot is a Guajillo Pepper?

The guajillo pepper is considered a mild to medium heat level chili, measuring from 2,500 to 5,000 Scoville Heat Units on the Scoville Scale. Compare that to a jalapeno pepper, which ranges from 2,500 to 8,000 SHU, and it can be roughly equivalent to the jalapeno in heat.

Guajillo peppers offer a bit of heat along with smoky notes and a berry-like flavor profile. Some people note hints of berries mixed with a fruity or green tea-like flavor. Because of this complex mix of subtle tastes, it is no wonder why it has long been one of Mexico's most popular chili peppers.

Cooking with guajillo peppers is a great way to build wonderful flavor. They are widely used in authentic Mexican cooking and cuisine. It is best to lightly dry toast them in a medium hot pan to draw out some of the flavor, then open them, remove the seeds, and rehydrate them in hot water for about 30 minutes. Then, process them into a paste, which you can add to many dishes, sauces, mole, marinades, soups and stews and more.

Another way is to remove the seeds and stem and grind the pods into a powder for seasoning.

Can I Substitute Ancho for Guajillo?

Yes, you can use ancho peppers in place of guajillo chile peppers in any recipe, though the flavors are not identical. Anchos have an earthier, darker flavor, where guajillos are a bit fruity with notes of green tea. They actually work wonderfully when used together.

Learn More About These Other Popular Mexican Peppers

Try Some of My Popular Guajillo Pepper Recipes

Got any questions about the guajillo pepper? Drop me a line anytime. I'm happy to help! -- Mike H.

NOTE: This page was updated on 1/14/20 to include new information and photos. It was originally published on 9/22/13.